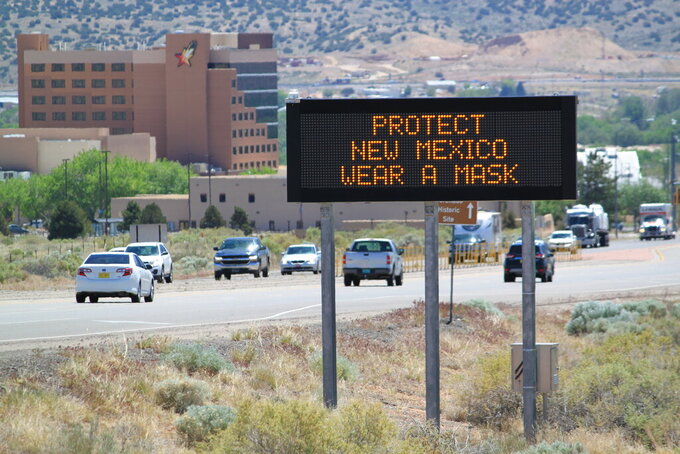 In this May 7, 2020, photo, an electronic highway message board in Rio Rancho, New Mexico, encourages people to wear masks during the coronavirus public health emergency. (AP Photo/Susan Montoya Bryan)

ALBUQUERQUE, N.M. (AP) — Some New Mexico counties have seen visitor spending collapse while others have seen revenues in the construction and agriculture industries grow in recent months, according to data released Friday by the state Economic Development Department.

The numbers for the third quarter of the fiscal year — from January to March — includes the first weeks of the coronavirus health emergency when businesses were ordered to close or curtail operations.

“We know this data is already proving valuable to lawmakers and local officials as they quantify the economic impact of the COVID-19 health emergency on businesses and consumers,” Economic Development Secretary Secretary Alicia J. Keyes said in a statement. “We hope this information leads to more collaboration as we all move forward to make the best decisions for New Mexico.”

In Santa Fe County, where visitor spending is critical for the economy, the accommodations and food services sector saw a year-over-year decline of $14 million, or about 12%. The arts and entertainment sector declined $3 million, or 15%.

Bernalillo County, which includes the state's largest metro area, saw a 38% drop in arts and entertainment spending, which represents a $19 million loss. Lodging and food was down by more than $56 million, or 13%.

Elsewhere, San Miguel County saw big gains in the construction and arts, entertainment and recreation sectors. Revenue from the agriculture sector marked an increase in Doña Ana County, and Chaves County saw a 41% increase in construction spending from a year ago.

New Mexico is preparing to ease many restrictions on businesses beginning next week. State officials have said opening more of the economy will depend on whether New Mexicans abide by the rules and whether the pace of infection remains below peak levels.

Officials warned early on that state police officers would handle any complaints about businesses operating in violation of the order — first with a warning and then subsequent citations that could carry fines between $100 and $5,000.

State police said Friday they have issued 175 cease-and-desist orders. Just a handful of those cases have resulted in citations.

Despite Gov. Michelle Lujan Grisham's announcement that restaurants and gyms would be allowed to operate at 50% of capacity starting Monday critics are raising questions about the stricter limits on houses of worship.

“How in the world can the governor continue to limit worship services to 25%, at the same time allowing gyms to open to 50%? It’s increasingly obvious how little she thinks of your right to practice your religious beliefs as you so choose,” he said. “Most churches and pastors across New Mexico have been patient up to this point, but there comes a time when enough is enough.”

A message seeking comment from the Archdiocese of Santa Fe, one of the oldest Catholic dioceses in the nation and the largest in New Mexico, was not immediately returned.

New Mexico has nearly 7,500 confirmed cases, with more than half of those in McKinley and San Juan counties. The death toll stands at 344, while about 200 people remain hospitalized. State health officials say more than 188,000 tests have been done.