Some Old Order Mennonites feel called to return to church 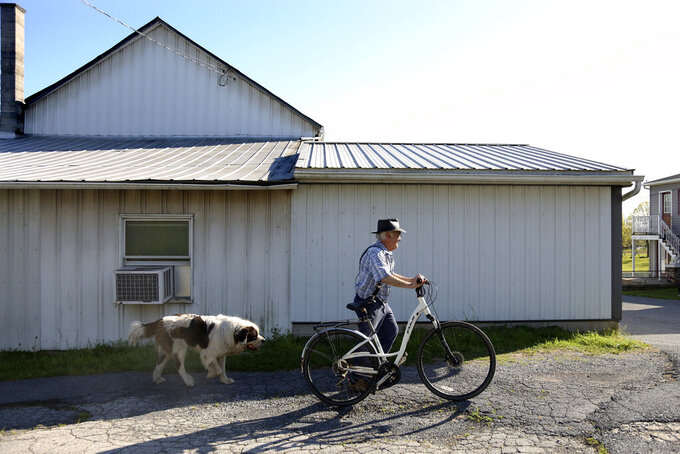 In this Monday, May 4, 2020, photo, Aaron Hurst, 67, owner of AAA Farm Supply walks home with his dog Ralph after a day of work in Terre Hill, Pa. (AP Photo/Jessie Wardarski)

NEW HOLLAND, Pa. (AP) — For the first time in weeks, kids played in the church cemetery. Nearby, a group of men in their 20s reflected on what it meant to gather again during the pandemic.

“Human health is important,” one of them said. “But ultimately, spiritual health is more important.”

Their order — one that shuns technology, cars and electricity — never missed Sunday services in more than 100 years, when the deadly 1918 flu pandemic interrupted worship.

Then, a different virus intruded in this world apart.

For nearly two months, the Old Order Stauffer Mennonite Church followed Pennsylvania’s stay-at-home order and guidelines that discouraged gatherings in houses of worship. COVID-19 forced the postponement of weddings, funerals and their bi-annual communion, a high point. While some more modern Mennonite orders in Lancaster County held services by video, the Stauffers did not.

But now, it was “time to get back to work,” their bishop said. “And more so ... in the spiritual sense.” It was time to resume worship, he said — though he wondered how many worshippers would come, and he still felt concerns about “offending the public and the government.”

News spread fast: first service together in weeks; not mandatory, only for those who felt safe.

That morning, dozens arrived: men in wide brimmed straw hats, women in bonnets and dark dresses; their children in suspenders. Some greeted each other without face masks. Others walked into the bathroom to apply hand sanitizer before they filled the long, creaky wooden church pews in silence and sang hymns in German and the dialect known as Pennsylvania Dutch.

“It has been many weeks since we gathered here. Are we thankful to be here again?” Bishop Marvin asked. “Aren’t we thankful for health to go about our life?”

Like others in his congregation, he was welcoming, but he didn’t want his last name to appear on the news because of religious views on modesty.

Mennonites believe in pacifism, reserve baptism for adults and oppose military service. They belong to a Protestant denomination and trace their origins to the Anabaptists, a radical 16th-century sect of the Reformation originating in Switzerland. Their name comes from Menno Simons, a Dutch Roman Catholic priest who joined the Anabaptists.

Some Old Order Mennonites eschew technology, cars and dress in plain clothes like the Amish, who separated from the Mennonites in the 17th century. There are some differences. The Amish worship at home and men grow beards without mustaches after they marry.

“I guess it’s a little like you go down the highway and one vehicle says Ford and the other says Dodge, and they might all come out of the same assembly line,” Bishop Marvin said. “But as far as the foundation, or the fundaments of the faith, it’s not that much different.”

The Old Order Stauffer Mennonite Church formed in 1845. Today, they number about 2,000 in Pennsylvania, 500 of them in Lancaster County, said Steven Nolt, senior scholar at the Young Center for Anabaptist and Pietist Studies at Elizabethtown College in Pennsylvania.

“The Stauffer Mennonites are probably the most technologically restrictive of any of the Old Order groups, so their means of communication has always been very much face-to-face. They need to be together in order to communicate,” Nolt said. “Being apart was probably really hard for them.”

During Sunday worship, Bishop Marvin said their time apart from each other gave parents a chance to read Scripture with their children at home. But he acknowledged challenges. His mother died at age 95 on April 2, and the community couldn’t gather for a large funeral service.

The guidance said religious leaders were “encouraged to find alternatives to in-person gatherings and to avoid endangering their congregants.”

Other congregations adapted. The Groffdale Conference Old Order Mennonites used landline phones as an alternative to their in-person worship, canceled for the first time in more than a century.

“I can remember my great grandparents talking about the 1918 flu, the Spanish flu, when the churches were closed for three months. There were no funerals, and a lot of people died,” said Aaron Hurst, a congregant who owns a hardware store.

The conference call worship was launched with the help of Elvin Hoover. From his home office overlooking the Conestoga River, he receives faxes offering farm products, masks and other services. He then announces the news in Pennsylvania Dutch through a phone line that reaches hundreds in his community. Church service became so popular, he said, that on a Sunday, it jammed the local phone exchange.

Modern orders like the Akron Mennonite Church used video conferencing for the first time during Sunday worship. Co-pastor Rachel Nolt began the May 3 service by lighting a candle. After a reading, she divided the congregation into virtual breakout rooms and asked them to reflect on the Scripture.

“How did you hear it differently because of our current situation?” she asked. A couple shared their experience after they contracted the coronavirus. Others prayed for a boy who was going to undergo surgery, and a woman diagnosed with cancer.

The service ended with Nolt saying: “And so let us go with hope, transforming ourselves to transform the world,” to which all responded: “Trusting in the God who brings life from places of death.”

At the Stauffer Mennonite Church, the service ended when men, women and children turned around on their seats in unison and knelt on the wooden floor. With their eyes shut, hands cupped around their temples and foreheads pressed against the pews, they recited the Lord’s Prayer, together but prayerfully isolated.