Some states plan big spending with Biden's aid, others wait 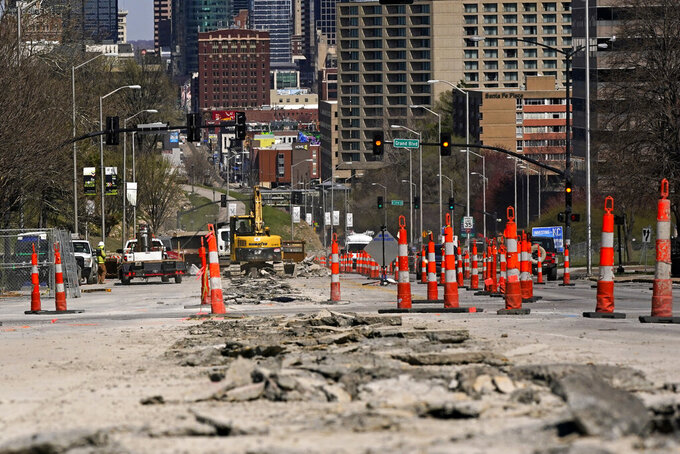 FILE - In this Wednesday, March 30, 2021 file photo, workers replace old water lines under Main Street as part of work to update water and sewer systems as well as prepare the road for the expansion of a street car line in Kansas City, Mo. The federal American Rescue Plan, comes on top of $150 billion the federal government sent directly to states and local governments in 2020. This year's law cites infrastructure for water, sewer and broadband internet as allowable uses. (AP Photo/Charlie Riedel)

Though still awaiting money from the latest federal coronavirus relief act, some governors and state lawmakers already are making plans to add the multibillion-dollar boon to their budgets.

Among their priorities: bailing out depleted unemployment accounts, expanding high-speed internet and providing additional aid to schools and businesses.

The $1.9 trillion pandemic relief law signed by President Joe Biden earlier this year contains $350 billion of flexible aid for state and local governments, plus billions of dollars more for specific programs such as housing assistance. Unlike earlier coronavirus aid, states have broad leeway to use the money to plug budget holes, invest in certain infrastructure or address the “negative economic impacts” of the pandemic.

States are expected to receive an initial installment soon, with a second round coming a year later.

“A billion dollars has just fallen from the sky, in some respects," said Vermont Gov. Phil Scott, a Republican. "It’s here, right in front of us. We have to invest it wisely.”

Like many governors, Scott hadn't accounted for a new influx of federal money when he presented a budget plan earlier this year. Now he's working with lawmakers to add it to the state's spending plan while still awaiting guidance from the U.S. Treasury Department on specific ways the money can — or can't — be used.

In other states, the spending plans include bonuses for teachers and first-responders; aid to movie theaters and entertainment venues; construction at parks and public facilities; and grants to farmers, commercial fishing operations and food processors.

“Of course it’s classical politics: They announce it, no details and everybody’s filling in the void with what they want to spend it on,” Virginia Secretary of Finance Aubrey Layne said.

Officials in Virginia and about a dozen other states told The Associated Press they are waiting for Treasury Department guidance before developing specific spending plans. Federal law prohibits states from using the aid to make pension payments or fund tax cuts. Some state officials are concerned that other uses also could be ruled out, trigging a provision requiring them to repay the federal government.

“If we don’t know what the guidelines are, it makes it hard to spend the money, because we don’t want to spend it in the wrong way and have it clawed back,” said Iowa Gov. Kim Reynolds, a Republican.

The federal law, known as the American Rescue Plan, comes on top of $150 billion the federal government sent directly to states and local governments last year.

This year's law cites infrastructure for water, sewer and broadband internet as allowable uses. It’s less clear whether money can be used for other infrastructure, such as roads and bridges. But some states are planning to do so, anyway.

A budget plan passed by the Indiana Legislature allots $192 million in federal aid to pay off bonds for an Interstate 69 project and $900 million for other “future state infrastructure projects." Maine Gov. Janet Mills, a Democrat, rolled out a plan this week that allots $50 million for road and bridge work this summer.

A potentially wide-ranging provision allows states to use the federal aid for “government services” affected by a pandemic-induced reduction in revenue. States also can use the aid to provide extra pay for essential workers, such as the $1,000 bonuses included in a Florida budget for first-responders, teachers and early learning instructors.

Federal law allows states to address the pandemic's economic effects by providing aid to households, small businesses, nonprofits and industries such as tourism, travel and hospitality. But that doesn't necessarily prevent money from going to other purposes.

Connecticut Gov. Ned Lamont, a Democrat, wants to use more than half the state’s flexible funds to plug budget holes over the next two years. But his plan also would spend millions on social programs.

Lamont wants to use $15 million to provide free admission for children at museums, aquariums, zoos and other venues from July through Labor Day; $3.5 million to help send low-income children to sports and specialty camps; and $1.9 million for programs that provide “safe, fun and healing spaces” for teenagers. He said the programs would provide a dual benefit — aiding children who were socially isolated during the pandemic and organizations that lost money because of a lack of customers.

Mills’ wide-ranging plan would provide aid to Maine’s agriculture and seafood industries, increase public support for private-sector research and subsidize health insurers to temporarily reduce premiums for small businesses and their employees, among other things.

Officials in Connecticut, Hawaii, Indiana, Kentucky, Louisiana, Maine and Maryland are among those wanting to use part of their federal aid to replenish depleted unemployment trust funds. Doing so could spare businesses from temporary tax hikes that could otherwise be imposed to repay federal loans that funded benefits when jobless rates spiked during coronavirus shutdowns.

A plan passed by Kansas' Republican-led Senate would dedicate nearly $700 million to compensate small businesses that were forced to close or had their operations restricted because of the pandemic — a “pot of gold” that some Democrats said should be partly passed on to workers in higher wages.

Republican state. Sen. Mike Thompson said compensation should have been paid months ago, as pandemic restrictions were imposed.

“A lot of these businesses should not have been shut down,” Thompson said.

In Kansas and some other states, the federal funding surge has generated spats over who can control how it’s spent.

Wisconsin Gov. Tony Evers, a Democrat, vetoed bills passed by the Republican-led Legislature that sought to use $1 billion for property tax cuts, $308 million for local roads and $250 million to pay off transportation bonds. Nonpartisan legislative staff had warned that those uses might not be allowed under federal law. Evers said he will instead spend the money according to his own plans, not all of which have been detailed.

New Mexico Gov. Michelle Lujan Grisham vetoed the Democratic-led Legislature’s plan to devote $600 million to the state's unemployment fund, $200 million to roads and $100 million to a college scholarship program. The Democratic governor said in her veto message that “the Legislature lacks the authority” to tell her how to use the money and that the state should wait for federal guidance.