Somehow, the NFL pulled off playing every game in a pandemic 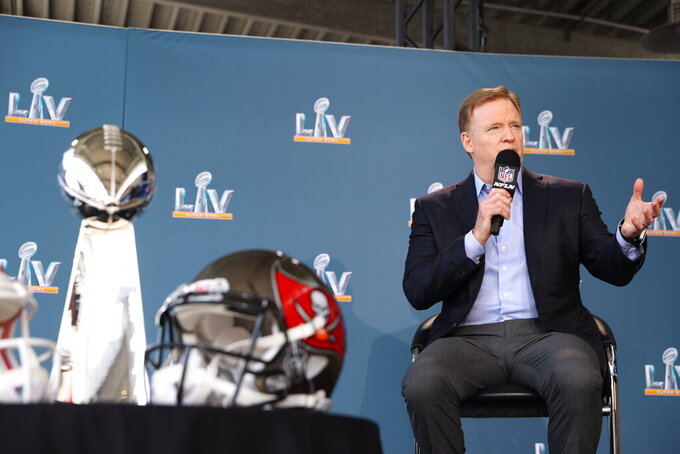 TAMPA, Fla. (AP) — Playing a contact sport in the middle of a pandemic seemed unthinkable to everyone except the NFL when the novel coronavirus shut down the country in March.

The improbable became achievable thanks to collaboration and sacrifice.

Super Bowl 55 takes place Sunday right on schedule. That was the plan all along. The league played 256 games in the regular season without any cancellations and made it through the playoffs to get here.

The NFL spent more than $75 million on testing alone, played games on all seven days of the week, shuffled the schedule numerous times, and constantly revised health and safety protocols.

“There’s so many people that had to work together to get this done,” NFL Commissioner Roger Goodell said Thursday. “There were doubters. Obviously, there were people that didn’t believe we could do it. Obviously, we had a lot of unknowns. But we believed that staying on schedule and working toward trying to get to 256 games done -- as we sort of say shorthand, avoid the asterisk. I think we were able to do that, but we’ve still got a few days left here, so we’re focused on making sure we finish out strong.”

Fresh off contentious negotiations for a new collective bargaining agreement, the league and the players’ union worked together to ensure health and safety were paramount. That meant the Denver Broncos had to play a game with a practice squad wide receiver as their quarterback. The Cleveland Browns had a playoff game with coach Kevin Stefanski at home on his couch.

“We have worked together to find solutions and work past our differences,” Goodell said. “We’ve had our dustups in the past. But this season it really took all of us to get through this.”

NFL Players Association Executive Director DeMaurice Smith even joined Goodell on stage toward the end of his news conference in a seemingly celebratory moment.

“This year has been, I think across businesses in the country, one of the best of labor and management working together to do something we couldn’t do alone,” Smith said.

There were nervous moments along the way as several teams experienced breakouts. The league had to impose intensive protocol measures to prevent disaster and keep things going.

“It started in Tennessee where we weren’t sure how to control this, what was causing this,” Goodell said. “Those were some anxious days, there’s no question about it. But we believed in our medical experts. We believed in the protocols. We were able to get that under control, and we learned a lot from that, that we then applied and changed, and I think that helped us.”

Contact tracing devices worn by players, coaches and team personnel played a vital role in the process. Ultimately, the league learned through extensive research and data analysis there was no on-field transmission of the virus during games or practices.

“I think what we learned from those experiences is being outdoors or in a large, well-ventilated space like our indoor stadiums are, is a really big, important factor here,” said Dr. Allen Sills, the league’s chief medical officer. “When we also looked at the data for our contact tracing devices, we saw that even though players are lined up close to each other in their tackling and doing all these things, when you sum up all those interactions, it’s still a fairly brief exposure.

“So we had a number of very brief exposures happening in an open-air, a large-air environment with great ventilation, with a lot of air movement and a lot of position changes in and around the field. So I think that we’ve come to realize that all of those are protective factors and things that minimize or mitigate against the spread of virus. As we like to say, the virus never crossed the line of scrimmage as near as we can tell. And I think that is an important observation, not only for the NFL, but sports and society at large.”

Goodell said the goal was not to avoid positives because that wasn’t realistic with approximately 7,500 tests per day. Rather, the league focused on daily testing, identifying positive cases and isolating quickly. Overall, the league accumulated nearly a million tests.

Though stadiums were empty most of the season, 1.2 million fans attended NFL games when they were allowed. About 22,000 fans will be in attendance when the Kansas City Chiefs (16-2) meet the hometown Tampa Bay Buccaneers (14-5) on Sunday. Everyone in the stands will be required to wear a mask.

“We want our fans to be safe,” Goodell said. “They need to be smart.”

Just as it seems the NFL was for much of the last five months.