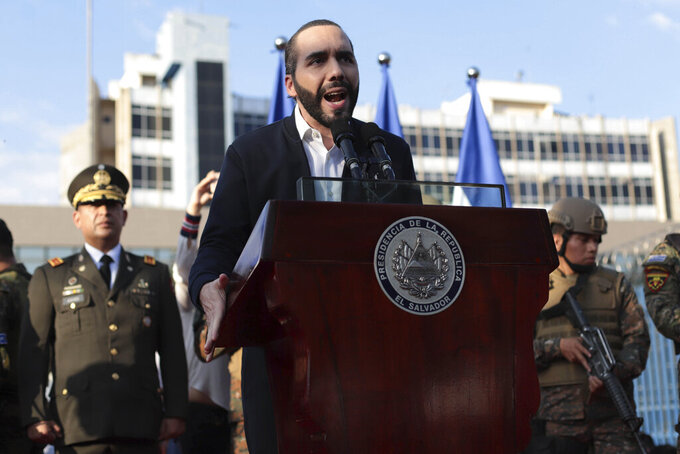 FILE - In this Feb. 9, 2020 file photo, El Salvador's President Nayib Bukele, accompanied by members of the armed forces, speaks to supporters outside Congress in San Salvador, El Salvador. The Biden administration turned down a meeting request with El Salvador's president on an unannounced trip to Washington on the first week of Feb. 2021. (AP Photo/Salvador Melendez, File)

MIAMI (AP) — The Biden administration turned down a meeting request with El Salvador’s president on an unannounced trip to Washington last week, as criticism of the Central American leader mounts among Democrats, three people with knowledge of the decision said Monday.

The trip by Nayib Bukele, which has not been previously reported, came after a senior White House official warned in an interview with a Salvadoran news outlet highly critical of Bukele that the Biden administration expected to have “differences” with him.

Bukele was quick to embrace former President Donald Trump’s hardline immigration policies restricting asylum requests, which won him a great deal of U.S. support for his tough governing style in El Salvador, where he is popular. But like other world leaders befriended by Trump, he faces an uphill climb pivoting to the Biden administration, which is seeking to undo those policies and has signaled its relationship with El Salvador is under review.

The president’s surprise trip amid a pandemic posed a dilemma for U.S. policy makers. They were given little advance notice and are mostly avoiding in-person meetings due to the coronavirus and because many senior positions remain vacant, said the the three people, all of whom are in Washington and insisted on speaking anonymously in return for discussing internal decision-making.

In rejecting Bukele’s request, the Biden officials wanted to ensure Bukele didn’t try to tout any meeting as a show of support before legislative elections later this month where he's seeking to expand his power base, the people said. However, they did make an exception for Ecuadorian President Lenín Moreno, who met in Washington with senior Biden officials 11 days before the Andean nation’s presidential election.

Bukele insisted that the trip was private and that he didn't request any meeting with Biden officials.

What “president in the world will go to a trip with his wife and baby girl to sit down in Washington and ask for random meetings to be held immediately? That doesn’t even make sense,” he said in a text message.

The three people didn't say how the request for a meeting was made. But they said the decision not to meet with Bukele was deliberate.

While the Biden administration hopes to eventually engage Bukele in its $4 billion plan to attack the root causes of migration from Central America, it has serious concerns about his respect for the rule of law and democracy, the people added.

“Clearly conditions have changed for Bukele,” said José Miguel Vivanco, the Americas director at Human Rights Watch in Washington. “His popularity in El Salvador doesn’t insulate him from legitimate scrutiny in Washington over his record on human rights and respect for the rule of law.”

The State Department’s Western Hemisphere section said the Biden administration values what it considers a strong relationship between El Salvador and the United States and will work closely with its partners to address challenges in the region. A spokesperson declined further comment.

During the visit to Washington, Bukele did meet with Luis Almagro, the secretary general of the Organization of American States, said Foreign Minister Alexandra Hill, who did not accompany the president on the trip.

The OAS, which last year announced it would send an observer mission to El Salvador for the Feb. 28 congressional election, didn't respond to a request for comment nor put out any statement about the visit. Almagro is known to regularly tweet about his meetings with visiting dignitaries and on the same day he met with Bukele promoted his participation in a Zoom call with diplomats from Colombia.

Bukele took office in 2019 as an i ndependent vowing to rescue El Salvador from the deep divisions left by uncontrolled gang violence and systemic corruption in both right- and left-wing governments that followed the end of a bloody civil war in 1992.

Polls say an overwhelming majority of Salvadorans approve of his tough approach, which is credited with reducing high levels of violence, and his allies are expected to win a majority in this month’s congressional vote.

But increasingly Democrats, but also some Republicans, have criticized Bukele for strong arm tactics like sending troops to surround Congress last year to pressure lawmakers to vote on funding for the fight against the gangs.

Over the weekend, two House Democrats, Rep. Norma Torres and Rep. Albio Sires, the chairman of the House Foreign Affairs subcommittee on Latin America, sent a letter to Bukele urging him “not to stoke divisions in the interest of political gain.”

The letter was prompted by the Jan. 31 killing of two individuals returning from a rally by Bukele’s opponents from the leftist FMLN party. Police have arrested three bodyguards who work for the Health Ministry as suspects.

Both Bukele and his opponents seized on the confusing incident, which is under investigation, to mutually accuse each other of inciting political violence.

“It looks like the moribund parties have put into practice their final plan,” Bukele wrote in the immediate aftermath of the killings, countering criticism on social media from opponents that his rhetoric was to blame for the deaths. “They’re so desperate not to lose their privileges and corruption.”

The Biden administration last week terminated Trump-era bilateral agreements with El Salvador, Honduras and Guatemala that required people seeking asylum at the U.S.-Mexico border to go instead to one of the Central America nations and pursue their claims there.

Legislation passed last year and supported by Democrats curbs U.S. foreign aid to El Salvador to fund the purchase of U.S. military equipment. The State Department is also required to come up within six months a public list of corrupt individuals in Central America subject to sanctions, a move that could include some of the region’s most-powerful politicians.

Juan González, the National Security Council’s senior director for the Western Hemisphere, said last month that the Biden administration expected to have “differences” with El Salvador’s president and that any leader unwilling to tackle corruption won’t be considered a U.S. ally.