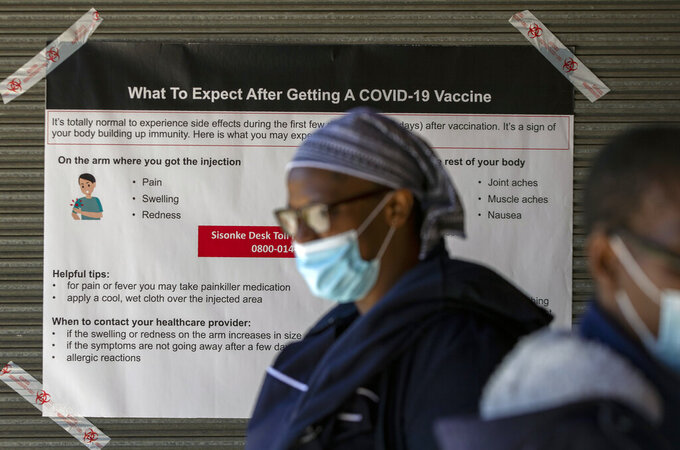 JOHANNESBURG (AP) — South Africa will restrict the sale of alcohol and limit the size of religious and social gatherings over Easter to prevent the holiday from contributing to a new surge of COVID-19, President Cyril Ramaphosa announced Tuesday.

“Given the role of alcohol in fuelling reckless behavior, we will put in place some restrictions over the Easter weekend," Ramaphosa said in an address broadcast nationwide.

He said retail sales of alcohol will be banned Friday through Monday. Bars and restaurants will be able to sell alcoholic beverages but will be required to close at 11 p.m.

A maximum of 250 people will be allowed at indoor religious gatherings while 500 people are allowed for outdoor events.

Ramaphosa's announcement came after he consulted health experts and religious leaders on Tuesday to discuss ways to curb the spread of new infections.

South Africa now has a cumulative number of more than 1.5 million infections since the outbreak of the virus last year, the highest in Africa. A total of 52,788 people have died from COVID-19 in the country.

Ramaphosa said his government is doing everything possible to expand the country's vaccine campaign.

So far South Africa has vaccinated just over 251, 000 health care workers as part of a Johnson & Johnson study, far short of 1.25 million health workers to be vaccinated as part of the first phase of the country's vaccination program.

The second phase will see vaccinations of the elderly and those with co-morbidities, which Ramaphosa said would begin in mid-May.

“Although there have been delays in securing vaccine supplies, we are still confident in achieving our vaccination targets," he said.

South Africa is also about to sign a contract to purchase 20 million doses of the Pfizer vaccine but they are only expected to arrive in the second half of the year, he said. Together, the J&J and Pfizer vaccines will provide South Africa with enough doses to vaccinate 41 million of the country's population of 60 million, he said.

On Monday Ramaphosa announced that a vaccine manufacturing facility in South Africa would provide 30 million doses for the country and 220 million for the rest of the continent.

The Aspen Pharmacare sterile manufacturing facility, which is based in Gqeberha (formerly Port Elizabeth) in the Eastern Cape province, is to begin producing the Johnson & Johnson vaccine and is expected to start delivering these batches next month, he said. The facility will receive large batches of the components of the J&J vaccine, blend them and then put them in vials and package them, a process called fill and finish.

Aspen will produce 30 million J&J doses for South Africa and more than 220 million doses that will be sold to other African countries, Ramaphosa said.

The $200 million Aspen facility has the capacity to produce 300 million doses of the Johnson & Johnson vaccine annually, he said.

The government has faced criticism over the slow rollout of its vaccination program, which is lagging in its efforts to vaccinate 67% of its population this year. With the slow delivery of vaccines, mass vaccinations have not yet started, making unlikely the target can be reached this year.

The country’s rollout program was affected when it had to sell its batch of 1 million AstraZeneca vaccines which were shown to be less effective against the variant of the virus that is now dominant in the country.