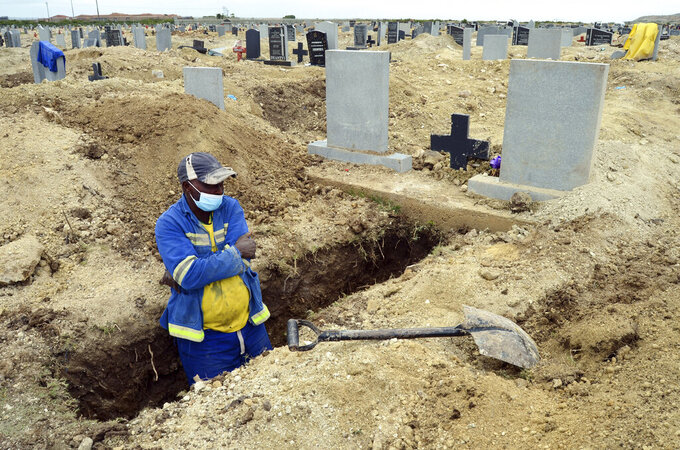 JOHANNESBURG (AP) — South African President Cyril Ramaphosa has announced the closure of many of the country's beaches throughout the festive season to fight a resurgence of new COVID-19 infections.

Ramaphosa said there are concerns that new infections in the country’s second wave of the virus are increasing rapidly and may overwhelm some hospitals.

“If we do not do things differently this festive season, we will greet the New Year not with joy, but with sorrow," said Ramaphosa in a televised address to the nation on Monday night. "Many of our friends, relatives, and co-workers will be infected, some of them will get severely ill and some, tragically, will die.”

New infections have been blamed on people’s failure to wear masks and practice social distancing, while large gatherings, especially parties, have been identified as superspreader events.

Ramaphosa also announced an extended nighttime curfew and increased restrictions on the sales of alcohol, which will now only be sold from Monday through Thursday between 10 a.m. and 6 p.m. He extended a nighttime curfew from 11 p.m. until 4 a.m. and restaurants and bars must close at 10 p.m.

South Africa has recorded 7,999 new infections and 170 deaths in the last 24 hours, bringing the cumulative number of confirmed cases since the virus outbreak to 860,964.

The upcoming holiday season poses a risk of more infections as many people travel across provinces for vacations and visiting their families, said Ramaphosa.

He said his government wants to contain the virus without imposing restrictions that may hurt the economy.

More than 2 million people lost their jobs during the country's earlier hard lockdown in April and May, according to the country’s statistics authority, StatsSA.

According to Ramaphosa, the country expects to receive its first delivery of a COVID-19 vaccine that should cover 10% of the country’s 60 million population in the early part of 2021.

In neighboring Eswatini, Prime Minister Ambrose Dlamini, who had tested positive for COVID-19, has died, the kingdom's government has announced.

The 52-year-old Dlamini, who had been prime minister since 2018, announced in November that he had tested positive for the virus and was being treated at a hospital in neighboring South Africa.

The government of Eswatini, the country formerly known as Swaziland, announced Dlamini's death on Twitter.