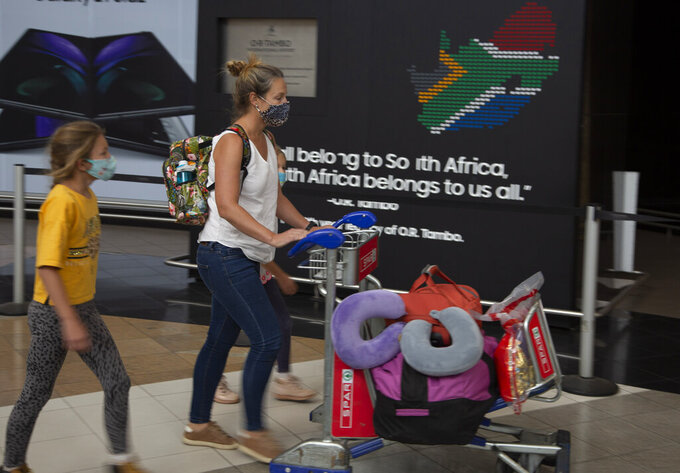 Passengers from Kenya enter the arrivals hall at the O.R. Tambo Airport in Johannesburg, Thursday Oct. 1, 2020. South Africa has reopened to international flights, ending a six-month ban on international travel that was part of its restrictions to combat the spread of COVID-19. (AP Photo/Denis Farrell)

South Africa has reopened to international flights, ending a more than six-month ban on international travel that was part of its restrictions to combat the spread of COVID-19.

Travelers arriving on international flights must provide a negative COVID-19 test issued no more than 72 hours before their departure.

After imposing one of the world's stricted lockdowns to combat COVID-19 at the end of March, South Africa has been gradually relaxing its restrictions. The country has passed its first peak of the disease, according to experts, and has reported 674,000 confirmed cases, including 16,734 deaths, according to the Africa Centers for Disease Control and Prevention. South Africa has nearly half of the total of 1.4 million cases reported by Africa's 54 countries.

South Africa still maintains restrictions on international travel. Tourists are not permitted from a list of more than 50 countries — including Russia, Britain and the U.S — which are deemed high risk because of their levels of COVID-19 cases. Diplomats, business travelers with critical skills, participants in professional sporting events, and returning citizens will be permitted to arrive from the high-risk countries, according to government regulations. The list of high risk countries will be reviewed every two weeks.

Travelers must also have proof of travel insurance to cover a COVID-19 test and quarantine costs, should they have symptoms during their visit.

The trickle of travelers brought a resumption of business to the normally busy Johannesburg airport. Tourism minister Mmamoloko Kubayi-Ngubane, came to the airport to see the return to travel and said the government is satisfied that all COVID-19 protocols are being observed.

“It was quite overwhelming to see that all the passengers who arrived had no difficulties with understanding what is expected from them to produce,” said Kubayi-Ngubane.

Chris Nyamkondiwa, who works in Zambia, said he was happy to return to his home in South Africa to see his family for the first time since the lockdown began.

“My family is here, and I work for a mine, so I have not seen them in the past seven months. It has been difficult trying to come back home,” he said.

Another traveler, Anne van Wyk, was scheduled to travel to the U.S to see her children.

“Because of the lockdown I was waiting for the borders to open," said van Wyk. "My children are in the states so I am going to visit them now, it is the first time that it is possible to do that.”