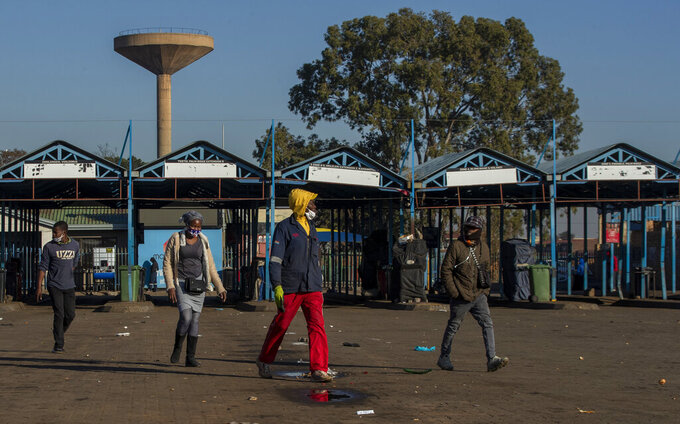 Stranded commuters walks away from a deserted taxi rank in Katlehong, South Africa, Monday, June 22, 2020, as taxi drivers affiliated to the SA National Taxi Council (Santaco) protested against what it believes to be insufficient government relief offered to the industry. South Africa's largest city, Johannesburg, has been hit by a strike by mini-bus taxis, preventing many thousands of people from getting to work on Monday, as the country reopens its economy even as cases of COVID-19 are increasing. (AP Photo/Themba Hadebe)

A strike by South Africa’s minibus taxi drivers over what they say is inadequate coronavirus relief funds has disrupted the return of scores of thousands of people to work.

Taxi operators in the economic hub of Gauteng province, which includes the city of Johannesburg and the capital Pretoria, Monday morning blocked roads and refused to transport workers. In Pretoria, there were reports of police using rubber bullets to disperse protesting taxi drivers.

The country’s taxi industry was among the sectors hit hard by the economic effects of the nationwide lockdown that started at the end of March to fight the spread of COVID-19.

Millions of South Africans rely on minibus taxis to commute to work and will need the service as the country eases lockdown levels in order to return the economy back to full operation. The minibus taxis have been restricted in the hours they can work the number of passengers they can carry. The taxi industry has rejected the government's allocation of 1.3 billion rand (about $76 million) in relief funds, claiming it is too little to address the industry’s losses.

Gauteng minister responsible for public transport in the province, Jacob Mamabolo, said the government would meet the industry this week to discuss the current impasse.

Africa’s reported cases of COVID-19 have gone above 300,000, showing a quickening pace of the spread of the disease across the continent. According to figures released Monday by the Africa Center for Disease Control and Prevention, the continent now has 306,567 confirmed cases, including 8,115 deaths and 146,212 recoveries. It took more than 90 days for Africa’s 54 countries to reach 100,000 cases, 19 days to reach 200,000 and now 12 days to go above 300,000. The actual number of cases is believed to be much higher, as testing across the continent is low.

South Africa, with 97,302 cases, accounts for nearly 1/3 of the continent’s total cases, and the epicenter is the Western Cape province, including the city of Cape Town, which has 52% of the country’s total. Numbers are growing in the economic hub of Gauteng province, including the largest city Johannesburg and the capital, Pretoria, which has 21% of the country’s total cases.

South Africa had initially hoped that it could control the spread of the disease through testing and tracing, but although the country has carried out more than 1.3 million tests, the highest number in Africa, it currently it takes an average of 12 days to get results, which medical experts say is much too long to do any effective tracking and quarantining.