South Carolina must give year-end tests in person at schools 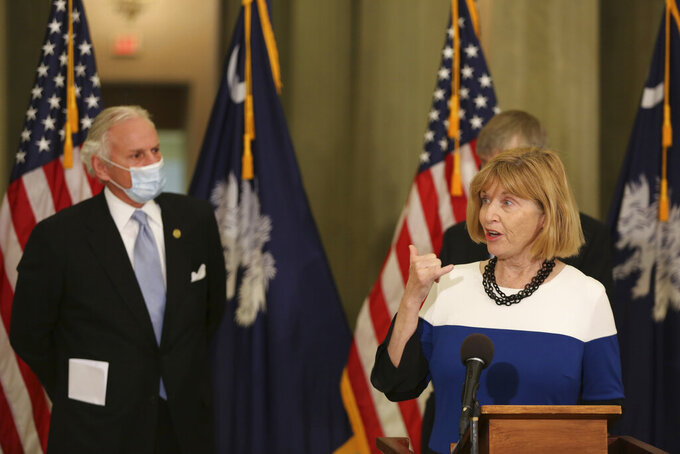 South Carolina Education Superintendent Molly Spearman, right, and Gov. Henry McMaster, left, discuss the state opening up vaccines for more people at a news conference on Tuesday, March 2, 2021, in Columbia, S.C. Officials announced the majority of people in the state, including teachers and people 55 and older, can get the coronavirus vaccine starting next week. (AP Photo/Jeffrey Collins)

But the U.S. Department of Education Department did agree to suspend penalties if less than 95% of students take the tests, Spearman said.

The tests must be given in person because of high security. South Carolina has been assessing what students know through tests that can be given virtually. They have already taken two sets this school year and Spearman told federal officials she planned a third to cover the typical end of school year tests.

The tests take up to a week to give.

“It will take valuable time away from classroom teaching. We so desperately need every minute we can to teach our students,” Spearman said.

The state will not use the spring testing to rate schools, Spearman said.

Now that the chance to avoid the tests are gone, officials will make the best of it and try use the data both locally and statewide to determine where students might be falling behind during the pandemic.

It could also help the state figure out how best to spend more than $2 billion of the latest federal money to help with COVID-19-caused problems.

“I did everything I could. I heard loud and clear from parents and teachers we should seek a waiver,” Spearman said.

The Palmetto State Teachers Association supported Spearman and said the tests will take time away from teaching to get data that will be difficult if not impossible to compare to before the pandemic.

“We are being forced to give the wrong tests at the wrong time and ignore what is best for students in order to obtain data we know will be flawed,” the organization said in a statement.

The tests that will be taken in school include SC Ready tests in math and English for grades three to eight, SC Pass in Science for grades four and six; and end-of-course tests in biology, algebra, U.S. History and the Constitution and English.

Schools can begin offering the tests April 15. They must be taken within 30 days of the end of school, which is a 10-day longer window than the federal government allowed before the pandemic, officials said.

Spearman emphasized no one will require students return to school to take the tests and said that should be a personal decision left to families who have opted not to send their children back to for in-person instruction yet.

Nearly every district in the state has a plan to have students back in school five days a week by mid-April, officials said.