South Carolina plans to make most of the season amid COVID 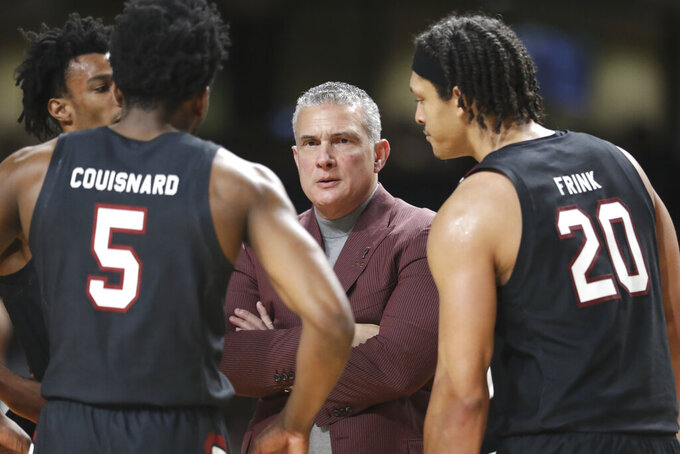 FILE - In this March 7, 2020, file photo, South Carolina head coach Frank Martin talks to Jermaine Couisnard (5) and Alanzo Frink (20) in the second half of an NCAA college basketball game against Vanderbilt in Nashville, Tenn. South Carolina coach Frank Martin carries a new perspective into this season with the Gamecocks. Martin caught COVID-19 during the spring when fear of the disease was spiking and few people knew how to deal with it. But Martin's time in isolation and recovery led to a deeper appreciation of when he and his players would return to the court. (AP Photo/Mark Humphrey, File)

Martin caught COVID-19 during the spring when fear of the disease was spiking and few people knew how to deal with it. But Martin's time in isolation and recovery led to a deeper appreciation of when he and his players would return to the court.

And he couldn't be more thrilled at seeing the Gamecocks prepare for this year's virus-impacted season.

“Excited for what this team can be and excited for the opportunities we get to play,” he said.

Martin, who's team went 18-13 last season before the virus ended the college postseason, has vowed not to let continuing worries about the virus or the probability of canceled of postponed games to “dampen my emotions, my enthusiasms for the opportunity” of basketball.

Martin might have plenty to be excited about in his ninth season with the Gamecocks.

Leading scorer and 3-point shooter A.J. Lawson returned to school for his junior season after exploring the NBA draft process. North Carolina transfer guard Seventh Woods is available and energized after sitting out last season. Linchpin forward Justin Minaya is healthy after a thumb injury that cost him the last nine games of the season.

It adds up, said assistant coach Chuck Martin, to a versatile, skilled roster.

“One of the things that might be overlooked is how deep we are,” Martin said. “We've got depth at every position.”

Couisnard took control of the point guard spot in the middle of the year and came alive during Southeastern Conference play to average 12.1 points and lead the team with 95 assists. Couisnard's bank shot as time ran out lifted the Gamecocks to their centerpiece victory last season, an 81-78 victory over then No. 10 Kentucky.

Bryant missed the first eight games of last season with injury and was slow to find his form. But the 6-foot-5 junior with the really long arms found his stride during SEC play and finished averaging 9.1 points and 4.4 rebounds.

"I never really went through an injury before,” Bryant said. “That was kind of like my first major injury. Somehow I bounced back.”

Some other things to watch for during South Carolina's season:

Seventh Woods, raised in Columbia, transferred back home last fall after three seasons with the Tar Heels. Instead of immediately rushing back on the court, Woods and Martin agreed he should take a season off. Woods said it has done wonders for him in basketball and in life, Woods was diagnosed with Rhabdomyolysis, a rare muscular disease that attacks muscles and can cause muscle break down and muscle death. Woods says he's healthy now and ready for a final college season.

A.J. Lawson called it a “weird summer" of Zoom calls with NBA teams and scrambling to find places to workout due to the continuing pandemic. Lawson said coming back to school was the right choice for him, especially with the disease. “I feel like if I come back to school it would be a better decision, to get better and have more time,” he said.

The Gamecocks are without leading rebounder and shot blocker Maik Kotsar, who finished his four seasons and was the last remaining holdover from South Carolina's 2017 run to the Final Four. The 6-10 Kotsar's inside presence will go to Alanzo Frink, Wildens Levecque and Jalyn McCreary.

When the team returned to campus for workouts this summer and fall, Martin had them starting out in small pods to practice trying to limit isolations to as few people as possible should anyone test positive. Martin went back to full workouts last month, yet understands he, his staff and players must stay vigilant as the pandemic continues.

South Carolina starts SEC play in one of the most difficult ways possible — at highly regarded Kentucky on Dec. 29. The hardest stretch of the 18-game league season could be in mid-Jaunary when the Gamecocks face Tennessee at home before road games at LSU and Missouri. South Carolina has yet to announce non-conference games.