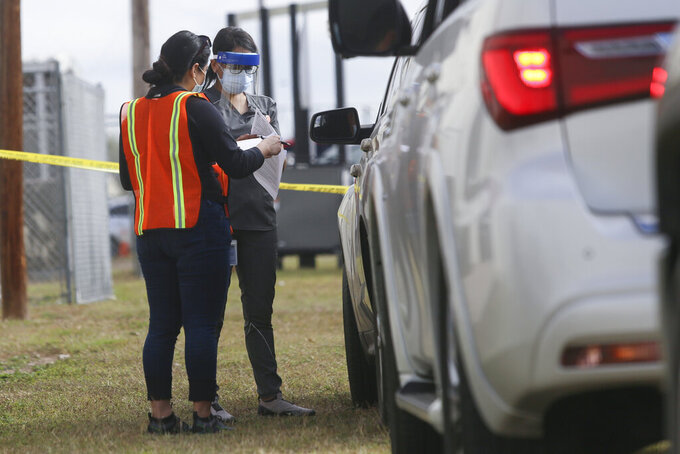 Staff help register and process those waiting in their vehicles in the line for non-ambulatory people to be vaccinated Tuesday, Jan. 5, 2021, at the COVID-19 vaccination clinic on the Rio Grande Valley Livestock Show grounds in Mercedes, Texas. (Denise Cathey/The Brownsville Herald via AP)

The Southeast Texas congressman and ranking Republican Ways and Means Committee member revealed his test results in a tweet late Tuesday, followed by a prepared statement Wednesday. The disclosure came as a record number of Texas COVID-19 deaths were reported Wednesday.

Brady had been practicing all guidelines laid out by the Centers for Disease Control and Prevention and the House physician, including social distancing and mask-wearing, according to the statement. Brady had been tested when he began experiencing COVID-19 symptoms and began receiving outpatient treatment from Walter Reed Medical Center.

Brady received the first dose of the Pfizer COVID-19 vaccine on Dec. 18 and was to have received his second dose later this week, according to the statement. It was not immediately known where Brady was recovering or whether he was quarantined.

The Conroe Republican had been the House Ways and Means Committee chairman until Democrats won a House majority in 2018.

A record 326 COVID-19 deaths were reported Wednesday, shattering the previous record of 278 deaths reported on July 23, according to statistics compiled by the Texas Department of State Health Services. That brought the Texas death toll for the eight-month-old outbreak to 28,545.

Austin-area officials announced Wednesday that they were discussing plans to turn the Austin Convention Center into a field hospital as hospitals continue to fill close to their capacities because of the soaring number of COVID-19 cases.

Dr. Mark Escott, the interim Austin-Travis County health director, said local hospitals' intensive-care units were projected to be filled to capacity by Jan. 15. However, the convention center could be pressed into service as a field hospital sooner as a surge of cases from the Christmas and New Year's holidays was expected to intensify, he said.

The convention center was pressed into service as a hospital previously during the July COVID-19 surge for up to 1,500 coronavirus patients.