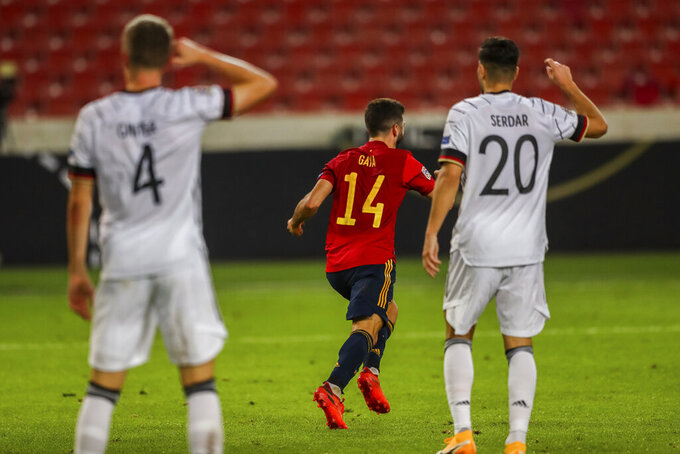 The Valencia defender scored in the sixth minute of injury to time to cancel out Timo Werner’s opening goal on his return to his hometown Stuttgart.

With international football returning for the first time since the outbreak of the coronavirus pandemic, all 54 games that are scheduled to take place across the continent over six days are taking place with strict hygiene measures, including the exclusion of fans. Players had to pass mandatory pregame tests for COVID-19.

Werner, who was born in Stuttgart and went on to become the club’s youngest scorer, gave Germany the lead in the 51st minute. He finished off a move started by a cross-field ball from Ilkay Gündoğan, with debutant Robin Gosens providing the cross.

Barcelona winger Ansu Fati came on for the second half to become Spain’s youngest debutant since Ángel Zubieta in 1936. The 17-year-old had an injury-time equalizer ruled out for a foul by Sergio Ramos in the buildup.

But there was still time for Rodrigo Moreno to set up Gaya for the equalizer, with the defender converting from close range.

It was Spain’s first game with coach Luis Enrique back in charge following the death of his 9-year-old daughter Xana due to a type of bone cancer in August 2019. Luis Enrique had stepped down for five months before returning in November, when he couldn’t have foreseen such a long wait for his next game.

Germany coach Joachim Löw refrained from calling up most of his Bayern Munich contingent after they played in the Champions League final on Aug. 23. Defender Niklas Süle was the exception as he only recently returned from injury.

Gosens started on the left to make his Germany debut after an unusual route to the senior side. The 26-year-old played in the Netherlands before joining Atalanta in Italy and never played for any of Germany’s youth sides.

Also in the same League A group, Ukraine defeated Switzerland 2-1.

Russia defeated Serbia 3-1 and Hungary beat Turkey 1-0 away in their group.

In League C, Moldova drew with Kosovo 1-1, and Slovenia and Greece played out a 0-0 draw.

The Faeroe Islands earned a 3-2 win over fellow minnow Malta in League D, where Latvia drew 0-0 against Andorra.