Spain hopes 2 infected players will be back for Euros 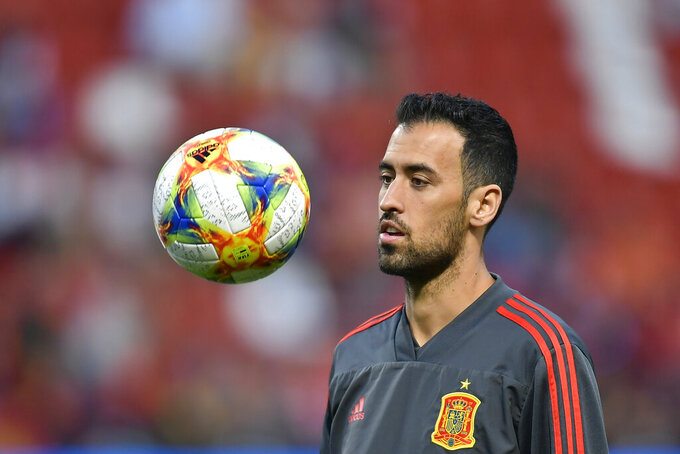 BARCELONA, Spain (AP) — Spain hopes captain Sergio Busquets and Diego Llorente will still have an impact on the European Championship after both players tested positive for the coronavirus.

Llorente’s positive test on Tuesday may have been erroneous after further tests came back negative, coach Luis Enrique said on Thursday. The Leeds defender will undergo another test on Friday, and if that comes back negative again, the team said he can return to the squad before Spain's first match on Monday against Sweden.

Spain’s preparations were thrown off after Busquets tested positive last Sunday. Players who test positive must stay in isolation for at least 10 days, meaning Busquets would miss the opener against Sweden.

Luis Enrique said “we are going to wait for him.”

“The good thing is that he has time on his side. Busquets will be on the squad, no doubt. Busquets is fine, without symptoms, so he can train and stay in shape. We hope that it can all end up in a scare.”

In Group E, Spain also plays Poland on June 19 and Slovakia on June 23 in Seville.

The rest of Spain’s players have passed daily coronavirus tests. Even so, Luis Enrique called up extra players and created two separate sides to reduce the chances that an outbreak could leave him without a team.

On Wednesday, Spain’s health ministry announced the armed forces would administer vaccines to the players on the national team.

The federation said the team would get vaccinated on Friday and no additional shots would be needed.

Luis Enrique said he hoped the vaccines would not cause any adverse reactions, which usually are limited to fever and tiredness, for his players before a match. Many people do not have any reaction to the shots.

“I would like them to get vaccines as soon as possible,” he said. “Each person reacts differently. It would be bothersome to not be able to count on a player.”