Spanish league to file charges against fan who invaded field 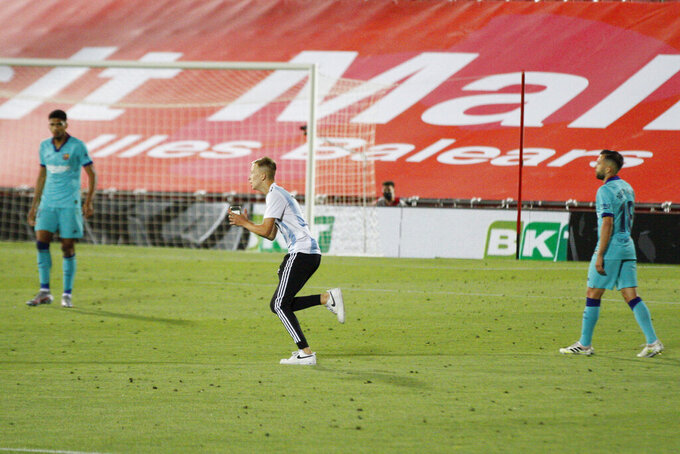 A supporter, center, invades the pitch, center, during the Spanish La Liga soccer match between Mallorca and FC Barcelona at Son Moix Stadium in Palma de Mallorca, Spain, Saturday, June 13, 2020. With virtual crowds, daily matches and lots of testing for the coronavirus, soccer is coming back to Spain. The Spanish league resumes this week more than three months after it was suspended because of the COVID-19 pandemic. (AP Photo/Francisco Ubilla) 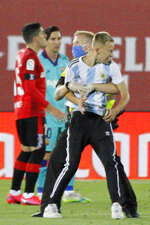 MADRID (AP) — The Spanish league said Sunday it will file criminal charges against the fan who ran onto the field during Barcelona’s match at Mallorca.

Saturday’s match was played without fans but the youngster wearing an Argentina soccer jersey made it past security and took a photo of himself a few meters in front of Barcelona defender Jordi Alba.

The league said the fan, who was not wearing a mask or gloves when he entered the field early in the second half, disobeyed orders from security personnel and broke health safety laws in place because of the coronavirus pandemic.

The league condemned the fan’s actions and said they “constituted a crime.” It said such actions “jeopardize everyone’s health and the integrity of the competition.”

The fan told Spanish media his goal was to take a photo with Argentina star Lionel Messi, but he didn’t have time to do it before security officers arrived to take him off the field.

He said he entered the San Moix Stadium by jumping over a fence and then came down from the stands to the field.

The youngster said he was released by police after they noted his details and had him sign a document. He said they made him delete the photo taken with Alba.

The Mundo Deportivo sports daily said the fan is of French origin but has lived in Mallorca his whole life.