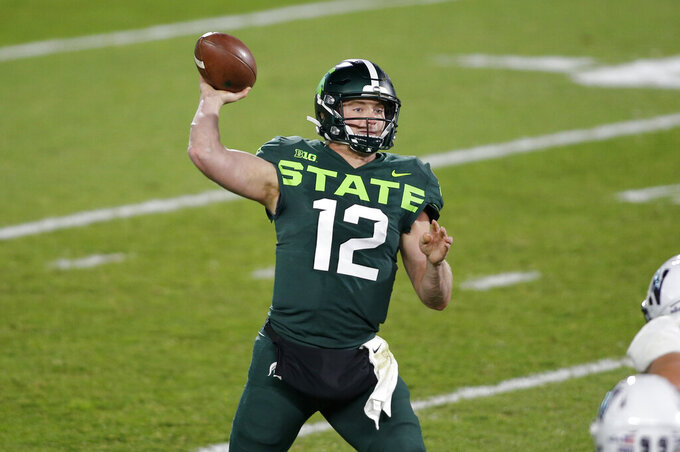 One thing is still true at Michigan State under new coach Mel Tucker.

The Spartans have been a dangerous underdog.

Michigan State has only two victories this season, but both were against ranked teams that were favored by double digits. No matter how this 2020 campaign ends for Tucker's team, that's something he and his players can build on — and another chance looms this weekend when the Spartans are scheduled to host No. 3 Ohio State.

Expectations were low for this Michigan State team after Tucker replaced Mark Dantonio and his first offseason with the Spartans was limited by the pandemic. There have certainly been some low points — the Spartans lost their opener to Rutgers and were blown out by Iowa and Indiana.

But it could have been far worse. Michigan State beat rival Michigan, which was ranked No. 13 at the time. And last weekend, the Spartans handed then-No. 11 Northwestern its first loss.

“You do see that when you have coaches and players that are competitors, obviously when you’re playing a really good matchup, obviously there’s just a competition factor that kind of comes into play in terms of intrinsic motivation, and wanting to put your best foot forward," Tucker said.

Michigan State won three Big Ten titles under Dantonio. The Spartans are a long way from reaching that type of goal, but another defining characteristic of Michigan State under Dantonio was that the program seemed to thrive in an underdog role. Two of those Big Ten championships required memorable victories over previously unbeaten Ohio State teams, for example.

Only three FBS teams this season have two wins over AP top 15 teams — Alabama, Georgia and Michigan State. Consistency, of course, is still an issue. That's why the Spartans are below .500. Plus, if Michigan State really starts making strides under Tucker, it won't be such a big underdog in a lot of these games.

“You don't want to ever overlook anybody, no matter what number is next to their name, because we know in the Big Ten every game's going to be a tough game," safety Xavier Henderson said. "You understand, like, our game (last weekend) got moved to ESPN from ESPN2, and you kind of understand, like, this is a big game. But I wouldn't say there's more attention to detail, because we want to bring that every week.”

Next up is Michigan State's toughest test of the season. The undefeated Buckeyes canceled their game last weekend against Illinois because of COVID cases, but they said Tuesday they were resuming full practices in preparation for Michigan State.

“I think at this point everyone has Ohio State somewhat circled on their schedule because it's considered maybe the best team in the country," Tucker said. "So when you come to the Big Ten, you come to Michigan State, you come here because of the caliber of ball that you're going to be able to play, the competition.”