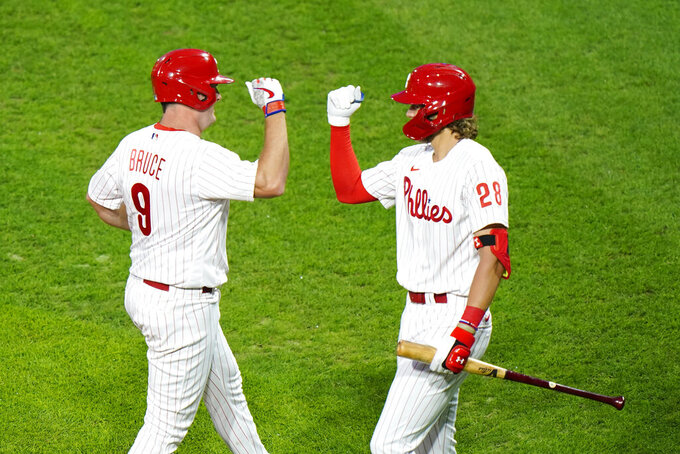 PHILADELPHIA (AP) — Spencer Howard got a celebratory beer shower, wiped it off with baby powder and calmly talked about his first major league win like a guy who expects many more.

Juan Soto hit a pair of two-run homers and Michael Taylor and Trea Turner also went deep for the defending World Series champions, who fell to 12-20.

Howard (1-1) allowed two runs and five hits, striking out four to earn his first win in his fourth start. He got three of those Ks in the first inning.

“It was nice,” Howard said about the traditional beer shower. “Tonight was the first time I felt synched up mechanically. My goal is to get better every day.”

The Phillies are 15-15 at the midpoint of the pandemic-shortened season after winning six of seven.

They'll be counting on Howard to win important games in September as the club tries to reach the postseason for the first time since 2011.

“He used all his pitches and he was a different guy,” manager Joe Girardi said. “I hope this is a big step for him.”

“We’re falling behind early in a game and playing catch-up," Nationals manager Dave Martinez said. "We’ve got to get some of these guys to understand the big innings kill us.”

Hoskins drove one out to left field in the first for a 1-0 lead. He has hit all six of his homers in the last 13 games, including five in the past seven.

After the Nationals closed within two, Hoskins ripped a two-run double with two outs in the seventh off Wander Suero to extend Philadelphia’s lead to 8-4.

“Our offense is really starting to click,” Hoskins said. “We have professional at-bats one through nine and that wears teams down.”

Jay Bruce connected in the second for a 2-0 lead. He has 17 homers in 201 at-bats since the Phillies acquired him from Seattle last June.

Jean Segura lined a three-run double to left-center in the fourth and scored on Alec Bohm’s sacrifice fly to make it 6-0.

Soto slammed his 10th homer in the fifth, an opposite-field drive that cut it to 6-2. Taylor and Turner hit consecutive homers off Heath Hembree in the seventh to get Washington to 4-2. Turner has a 16-game hitting streak.

The Phillies needed four innings from their revamped bullpen, which saw its majors-worst ERA rise to 7.09. JoJo Romero retired all four batters he faced before giving way to Hembree. Tommy Hunter got four outs and Brandon Workman finished, giving up Soto's 11th homer with one out in the ninth.

Soto has 11 homers in just 24 games played. Turner was 4 for 5, becoming the first player in Nationals/Expos history to have at least three hits in four straight games. He is the first major leaguer to do so since Ketel Marte last June.

“They’re just falling in the right spots," Turner said. "We’ve got plenty of guys that are hitting balls right at people, so it’s just lucky.”

LEAGUE OF HIS OWN

Hoskins is the first Phillies player since 1900 to have three straight games with multiple extra-base hits and a home run, and the only player in the majors to do so this season.

Philadelphia acquired right-hander David Phelps from the Milwaukee Brewers before Monday’s trade deadline for three players to be named. Phelps is the fourth reliever the team acquired in a trade in 10 days. Catcher Deivy Grullón and right-hander Reggie McClain were designated for assignment to make room on the roster.

Phillies: Bruce and LHP Ranger Suarez were activated from the injured list. INF/OF Scott Kingery was placed on the 10-day injured list with back spasms.