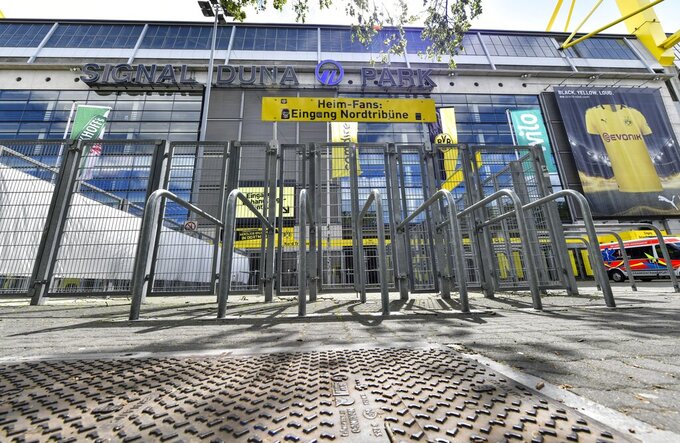 The supporter's entrance of the Signal Iduna Park, Germany's biggest stadium of Borussia Dortmund, is closed in Dortmund, Germany, Thursday, May 14, 2020. Bundesliga will now restart on May 16, 2020 when Borussia Dortmund will play the derby against FC Schalke 04 at home without spectators due to the coronavirus outbreak. (AP Photo/Martin Meissner)

Basketball and hockey arenas shuttered along with ballparks. Tennis and golf tournaments wiped out or postponed. Motor sport circuits silenced.

The spread of the coronavirus paused every major sport and left a hole in the lives of billions during two months of weekends without any live elite competition to watch — until now.

When the German Bundesliga lockdown ends on Saturday, a sense of normality will be restored with a very unusual feel. The sporting world and national leaders will be watching with as much trepidation as hope.

“The Bundesliga is going to be important,” Colombia President Iván Duque said. "It’ll be the benchmark.”

The first major European league to resume is about so much more than filling the void for social distancing soccer obsessives stuck on their sofas. If German clubs can safely play on during the pandemic, it would rouse competitions worldwide planning their own restarts following an unprecedented peacetime hiatus.

“The whole world is watching Germany to see how we do it,” Bayern Munich coach Hansi Flick said. "It can act as an example for all leagues. Then sport in general might be able to get going again. At the moment, it’s important to implement things exactly as required. We have a big role model function.”

The French league already abandoned its season prematurely on government orders, but England, Spain and Italy have the backing of authorities to plan on resuming in June.

“We can share solutions,” said Brighton manager Graham Potter, whose team is fighting for English Premier League survival, “because whether you’re in the Bundesliga or the Premier League, no one’s been through this before.”

Playing during a pandemic is a costly and rigorous business that requires a medical protective shield being placed around teams. Players, coaches and support staff will require regular coronavirus testing to swiftly detect infections. Stadiums and equipment will require disinfecting to ensure sport is not spreading a virus lacking a vaccine.

While players won't be wearing face masks on the field, everyone else in the stadium will apart from when coaches relay instructions from the bench area while maintaining distance of 1.5 meters (yards).

“It must be clear to everyone in the league that we’re on probation," Bundesliga chief executive Christian Seifert said, “and every match day is a chance to prove we deserve to take the next steps.”

What all major sports will have to accept -- from the Premier League to Formula One and Major League Baseball -- is thousands of empty seats. Mass gatherings could be banned in countries into 2021.

The sound of silence will be most notable on Saturday when Borussia Dortmund hosts Schalke in the Bundesliga's Ruhr derby. The Yellow Wall will be a sea of yellow and black emptiness, uninterrupted by supporters.

There are warnings to stay away from stadiums.

“We appeal to the reason and sense of responsibility of the fans,” Bayern Munich posted on its website ahead of Monday's trip to Union Berlin. “Please do not travel to the away game in Berlin, please stay away from the stadium!”

The need to close their doors to fans contributed to Wimbledon’s decision to call off the tennis championships. But other sports must find a way of resuming in whatever form, with billions of dollars in television contracts to fulfil. F1 and MLB are hoping to return in July.

Sports leaders have had to tread carefully while accelerating the return of competitions as the world tries to suppress a virus that has killed more than 300,000 known people in five months.

But the power of sport to connect communities has been reinforced in its absence and why so many coaches, players and fans are hoping the Bundesliga experiment works.

“People have their identities tied up in clubs,” said Erik Sviatchenko, captain of Danish league leader Midtjylland. “Their lives revolve around football. So, some of the morale is going to be lifted when football returns.”