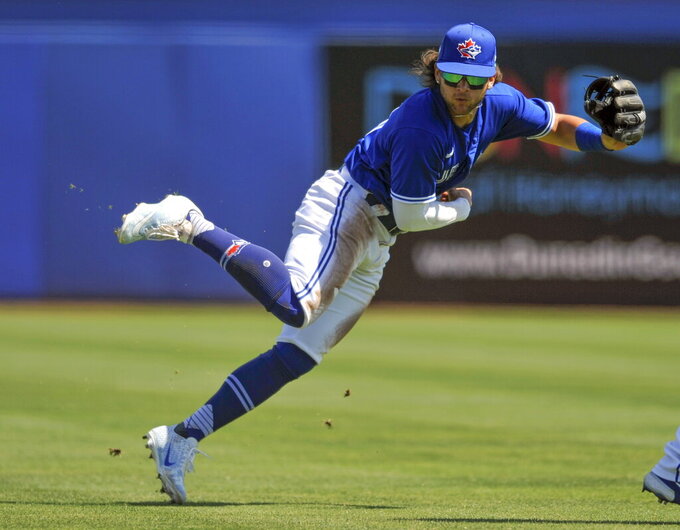 “If we go home without a trophy, that’ll be disappointing,” Bichette said.

A World Series winner with Houston in 2017, Springer admired Toronto’s young core from afar while with the Astros, taking note of youthful sluggers Bichette, Vladimir Guerrero Jr., and Cavan Biggio.

Now that Springer has seen the Blue Jays youngsters up close, he’s even more impressed.

“They’re very advanced,” Springer said. “They’re advanced in their preparation, advanced in how they work, understanding what they need to do. I know it’s early but I’m very excited.”

“It’s an exciting time to have the Blue Jays adding pieces,” Semien said. “With this young group and the new pieces we have, we’re just going to have to learn how to play together and it’ll be a beautiful thing.”

Infielder Joe Panik was with the Blue Jays in 2020, when they finished 32-28 and qualified for the expanded postseason. Panik, who won the World Series with San Francisco in 2014, said he’s enjoyed watching the Jays develop from youthful upstarts into pennant contenders.

“Our time to win is now,” Panik said. “We know we have the talent, we have the experience. Now’s the time, our window of opportunity is open.”

While the offense looks stacked, the Blue Jays don’t have a dominant pitching staff to match. Left-hander Hyun Jin Ryu is the dependable ace, but there are questions about what Toronto will get from Matz, left-hander Robbie Ray, and right-hander Tanner Roark.

An NL All-Star in 2017, Ray posted an ugly 6.62 ERA with Arizona and Toronto last season. Ray re-signed early in the offseason and has worked with Blue Jays pitching coach Pete Walker. So far, the results are encouraging: Ray had a 2.18 ERA through three spring starts.

Springer will likely make most of his starts in center field, while Semien is moving from shortstop to second base to accommodate Bichette. Guerrero moved from third base to first base in 2020 and will play mostly first this season, with Cavan Biggio moving from second to third. Yates replaces Ken Giles as closer, with newcomers Chatwood and Phelps joining holdovers Rafael Dolis and Jordan Romano in set-up roles.

Catcher Alejandro Kirk, 22, hadn’t played above Class-A before last season but excelled at the alternate training site and reached the majors in September, even making a postseason start at DH. Kirk continued to impress this spring, starting 5-for-10 with four RBIs in six games. Barring injury, or the Blue Jays carrying three catchers, keeping Kirk could mean losing three-year veteran Reese McGuire, who is out of options.

ONE MORE WITH MONTOYO

The Blue Jays picked up the 2022 option on manager Charlie Montoyo’s contract midway through camp. Montoyo replaced John Gibbons after the 2018 season and is 99-123 as Toronto’s manager.

“He’s very steady in-game,” general manager Ross Atkins said. “His instincts are incredible. I couldn’t be happier working alongside him.”

Still unable to play in Canada because of COVID-19, the Blue Jays will begin the season at their spring training facility in Dunedin, Florida. If Toronto still isn’t an option once the heat and thunderstorms of summer arrive, one alternative could be a return to Buffalo, New York, their “home” in 2020. The hope is that mass vaccinations on both sides of the closed U.S.-Canada border will allow the Blue Jays to go back to Toronto before season’s end.