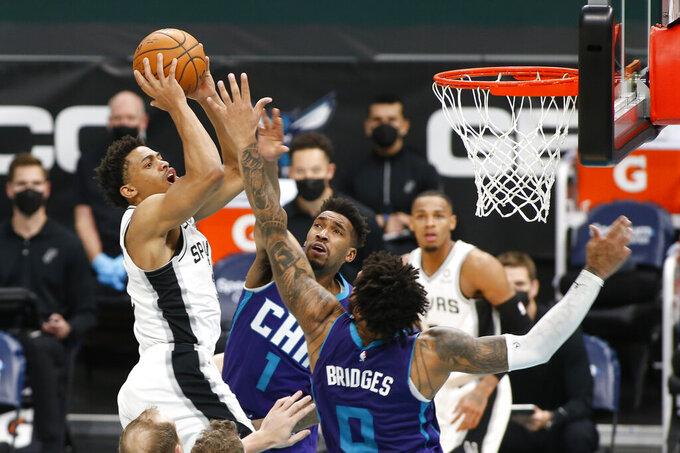 The San Antonio Spurs are dealing with a coronavirus outbreak among four players, the NBA said Tuesday, meaning the team will not play until the middle of next week at the earliest.

Meanwhile, Atlanta Mayor Keisha Lance Bottoms — whose city was picked to play host to the NBA All-Star Game and skills competitions on March 7 — raised major concerns about the notion of fans coming to the city for the events.

“People should not travel to Atlanta to party," she said.

The NBA on Tuesday postponed five more games: the next three for the Spurs — at Cleveland on Wednesday, at New York on Saturday and at Indiana on Monday — as well as the next two for the Charlotte Hornets while contact tracing is completed.

The Hornets were scheduled to play host to Chicago on Wednesday and Denver on Friday. Their games are halted because they were the last team to play the Spurs, losing to them on Sunday. The league is reviewing data to see if any Hornets may have been exposed to someone who tested positive for COVID-19, a process that takes time.

Charlotte’s next possible game is now Saturday at home against Golden State, in what would be Warriors guard Stephen Curry’s annual return to North Carolina, where he grew up. San Antonio’s next planned game is Feb. 24 at Oklahoma City, meaning the Spurs will have more than a week between contests — as Washington and Memphis did earlier this season when affected by the virus.

Charlotte coach James Borrego said “there's no indication that anybody" on the Hornets' roster is positive for COVID-19. But the Hornets finished their game with the Spurs with just eight available players, and Borrego confessed that he doesn't know what his roster will look like if Saturday's game goes on as scheduled.

“The league is doing everything they can to gather information and even more information," Borrego said. “They're going to watch us over this next week and make sure we're OK. I think that's really where it starts."

The postponements announced Tuesday push the total of games that have been moved back this season because of positive tests or contact tracing issues to 29, including the Spurs’ game at Detroit that was to have been played Tuesday night. The NBA called that game off on Monday.

Also postponed: Detroit at Dallas, scheduled for Wednesday, now off because of the severe winter weather that has hit Texas — where more than 4 million homes and businesses were without power Tuesday in subfreezing temperatures. The Mavericks had to call off practice Tuesday because of a power outage, and Dallas guard Josh Richardson said he didn't have power at his home.

A pair of games were added to this week's slate: Detroit will go to Chicago on Wednesday and Denver will now play at Cleveland on Friday. Those games were originally targeted for the second half of the season. The NBA has said it will shuffle some games, when possible, to accommodate the need to reschedule postponed games in the second half.

The NBA does not reveal which players tested positive, but its announcement of the latest postponements said the Spurs had positive tests among players — and did not mention coaches. Spurs coach Gregg Popovich announced last month, on his 72nd birthday, that he has received the vaccine that protects against the effects of COVID-19.

The Spurs were without just one player — guard Quinndary Weatherspoon — for their game Sunday against Charlotte because of the league’s COVID-19 protocols.

Spurs Sports and Entertainment CEO RC Buford said “basketball is secondary" right now given the situation in Texas with the storm and outages.

“Our team is responsibly handling our health and safety situation and will return to playing games as soon as it is safe to do so," Buford said.

The NBA will announce All-Star starters on Thursday. Four-time NBA MVP LeBron James, two-time reigning NBA MVP Giannis Antetokounmpo of the Milwaukee Bucks, two-time NBA Finals MVP Kawhi Leonard of the Los Angeles Clippers and others have spoken out in recent days to express their unhappiness about the idea of playing an All-Star Game during a pandemic — and wedging it into an already jam-packed season.

Tickets will not be sold. The Atlanta Journal-Constitution reported earlier this week that some vaccinated front-line workers will be invited to attend, but there will not be events for the general public — an obvious change from past All-Star weekends, which tend to attract tens of thousands of fans for the game, parties and atmosphere.

“Under normal circumstances, we would be extremely grateful for the opportunity to host the NBA All-Star game, but this is not a typical year," Bottoms said. “I have shared my concerns related to public health and safety with the NBA and Atlanta Hawks. We are in agreement that this is a made-for-TV event only, and people should not travel to Atlanta to party."

Bottoms also said there will be “no NBA sanctioned events open to the public" and that the city strongly encourages local businesses “to host events in the city related to this game."