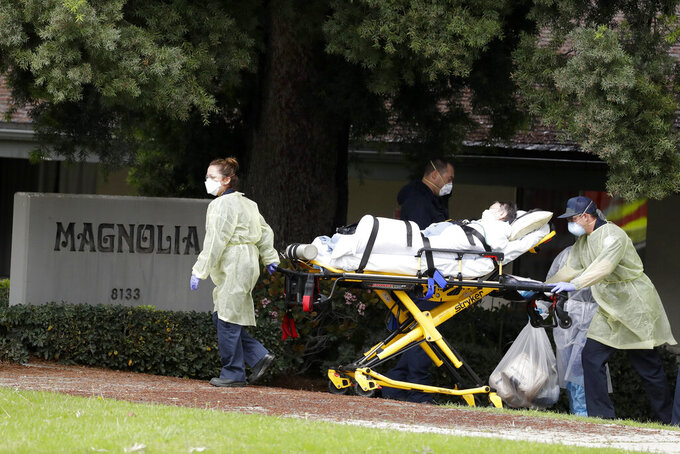 A patient is evacuated from the Magnolia Rehabilitation and Nursing Center in Riverside, Calif., Wednesday, April 8, 2020. More than 80 patients from a Riverside skilled nursing facility are being evacuated this morning to other healthcare locations throughout Riverside County, Calif. (AP Photo/Chris Carlson) 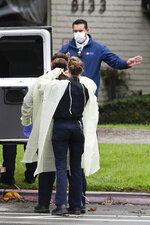 RIVERSIDE, Calif. (AP) — A Southern California nursing home where nearly three dozen residents have the coronavirus was evacuated Wednesday after staff members failed to show up to work while six infected residents have died at a nursing home in the San Francisco Bay Area.

The 83 patients at the Magnolia Rehabilitation and Nursing Center in Riverside were moved to other nursing facilities in the area after many employees failed report for work for the second day in a row, Riverside County public health officials said. The number of absences wasn't clear, but only one certified nursing assistant out of 13 scheduled to work showed up.

The evacuation occurred a day after the county was notified that 16 employees and 34 residents at the 90-bed facility had tested positive for the virus, said Brooke Federico, a spokeswoman for the county’s public health agency. The county initially sent nurses to help but was forced to evacuate the center as the shortage persisted.

No one at the facility could be reached for comment. A message was left on a number listed for the center's administrator.

“Nationwide all of our health care workers are considered heroes, and they rightly are,” said Dr. Cameron Kaiser, the county's public health officer. “But implicit in that heroism is that people stay at their post.”

Kaiser said it's up to state regulators to determine if the workers are punished for abandoning patients.

Bruce Barton, director of the county’s Emergency Management Department, made an impassioned plea for volunteers to work at nursing facilities, promising those who sign up will get adequate safety equipment and malpractice coverage.

“We are in immediate need for help to care for our most vulnerable patients,” Barton said. “Please come join us."

As the number of coronavirus cases grows in California, nursing homes are a particular concern because of the age and health conditions of residents, and their close living arrangements. Outbreaks have been reported in facilities throughout the state, and dozens of residents have died.

In San Francisco’s East Bay region, six residents at Gateway Care and Rehabilitation Center in Hayward have died, Alameda County health officials announced Wednesday. They were among 35 residents and 24 staff who tested positive at the facility.

In California's Central Valley, the Redwood Springs Healthcare Center in Visalia reported 57 cases and one death. The nursing home accounts for about one-third of all the infections in the county.

She said there may be instances where residents who are hunkered down under stay-at-home orders might choose to bring their loved ones home from a nursing facility to care for them.

“There are families who in fact have those resources and are able to go ahead and make that offer,” she said. “But I also know there are many families who are faced with the horrible reality that they cannot effectively care for a person in their home either.”

With so many nursing facilities dealing with outbreaks, the giant Navy hospital ship Mercy could be a temporary location for some residents.

The ship was brought to Los Angeles to deal with a potential overflow of hospital patients because of COVID-19. That hasn’t happened yet, and state Office of Emergency Services spokesman Brian Ferguson said the ship is being considered as a place to house non-acute, non-infected nursing home patients.

The Navy confirmed Wednesday that a crew member had tested positive for the virus and was isolated until he can be transferred off the ship. The case won't affect the ship's ability to receive patients, Lt. Joseph Pfaff told KCBS-TV.

Deborah Pacyna, director of public affairs for the California Association of Health Facilities, said her organization doesn't recommend people remove their loved ones from a facility that is adequately caring for them.

“That’s the best place for them to get the kind of care that they need given their underlying health conditions,” she said.

For most people, the coronavirus causes mild or moderate symptoms, such as fever and cough, that clear up in two to three weeks. For some, especially older adults and people with existing health problems, it can cause more severe life-threatening illness, including pneumonia.

While California has had many outbreaks at nursing homes, the Riverside facility is believed to be the first where an evacuation was ordered. An outbreak at a skilled nursing facility in neighboring San Bernardino County that infected more than 50 people and killed five caused staffing shortages but residents did not have to move.

April Verrett, president of Service Employees International Union Local 2015, said her union represents about a quarter of the nursing facility workers in the state, though not those in Riverside. Many are afraid but they continue working, Verrett said.

“Of course they want to make sure their work environment is safe and all precautions are being taken for themselves and their families,” she said. “But our folks are going to work.”

This story has been corrected based on updated numbers from officials to show the number of nursing evacuees was 83, not 84, and that 16 staff members have the virus, not five.