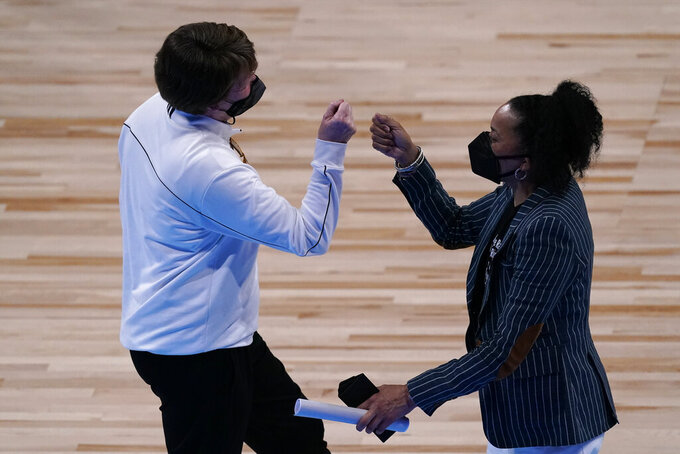 SAN ANTONIO (AP) — South Carolina’s Dawn Staley wishes the only narrative around the women’s NCAA Tournament was about playing the games and capturing a national championship instead of having to advocate for a level playing field with the men.

Staley and others continue to address differences and inequality between the women’s and men’s tournaments. Of course as a coach, she would rather be spending her time talking about her next opponent and basketball strategies.

“Here's the sad part,” Staley said this week. “I have to answer questions about this at the most exciting time of the year. We've gotten through a pandemic, yet we're still in a place where we have to talk about equality.”

Staley's Gamecocks, seeded No. 1 in the Hemisfair Region, continue their title quest against fifth-seeded Georgia Tech on Sunday for a spot in the Elite Eight.

Staley has been outspoken on equality and encouraged players speak out on issues they deem important. During this season, nine of 11 Gamecocks have sat during the national anthem to bring attention to racial equality.

While Staley supports the actions of her players, she has stood up during the anthem this season.

Staley is grateful for those who support wanting equal treatment for the tournaments.

“l’m hoping in my coaching career, things will change,” Staley said Friday. “But if not, we’ll keep fighting for the next generation of coaches and players and committee members and all those good people who want our game on equal footing.”

Iowa made sure it had everything ready for the Sweet 16, including the cutout of Caitlin Clark's golden retriever, Bella.

Bella's picture was in the stands Saturday — much like its been during games and practices this season for the Hawkeyes. Cutouts in the stands have been a way for school's to connect with fans who couldn't attend games in many places due to the pandemic restrictions.

So Bella, at least her cutout, has been a loyal and faithful attendee for Iowa all season. But it was a ruff finish for Bella and the Hawkeyes who were knocked out of tournament Saturday by top-seeded UConn, 92-72.

Louisville and the other teams left in the women's NCAA Tournament will be able to take outdoor walks.

Cardinals coach Jeff Walz said Friday he had been told when when teams switched hotels in San Antonio, they were no longer allowed to walk outside — something teams had done for some fresh air and mental health amid the tournament bubble.

Walz said Louisville hadn't taken a walk around the area since Wednesday.

"The only time we get to see the sun is when we get to walk across to the convention center for a COVID test or to get on the bus to come here to practice,” he said.

The NCAA sent out updated guidance Friday, telling teams they should coordinate walks with hotel volunteers to stay away from crowds and other Sweet 16 teams doing the same thing.

The second-seeded Cardinals face No. 6 seed Oregon on Sunday.

WORDS TO LIVE BY

Geno Auriemma waved Caitlin Clark over for a quick postgame chat after his UConn Huskies beat Iowa and the nation’s leading scorer.

He had a simple message for the freshman: “Crazy good."

Clark said she appreciated hearing from the Hall of Fame coach after a game where so much attention had been focused on Clark and his own All-American freshman Paige Bueckers.

“He was like ‘It’s kind of a shame it had to be so much pressure on you and Paige. I could tell you guys were both so antsy in the first half,’ which I think was kind of true,” Clark said. “I think we were both just a little, kind of could feel that pressure in a way. I took a few forced shots, but I think we both kind of calmed down there in the second half.”

Clark finished with 21 points, below her usual average 26.7 points a game. She was just 2 of 11 shooting through the first two quarters for seven points.

The bubble for the women’s NCAA Tournament appears to be working well.

The latest testing results through Thursday are in. With 14,100 tests run, no new positives have come in for COVID-19. There have been two positives through Monday’s testing on players, coaches and others working at the tournament using daily antigen testing.

Any false positives are quickly retested using the PCR test, which is considered more accurate.