Stanford guard Anna Wilson is returning for a sixth season 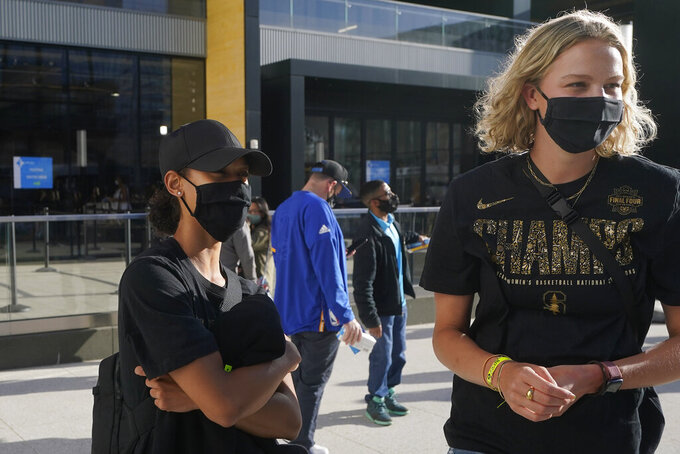 Stanford basketball players Anna Wilson, left, and Alyssa Jerome are interviewed as they arrive at Chase Center before an NBA basketball game between the Golden State Warriors and the Utah Jazz in San Francisco, Monday, May 10, 2021. (AP Photo/Jeff Chiu)

SAN FRANCISCO (AP) — Stanford guard Anna Wilson is returning to the university for a sixth season to help the Cardinal try to defend their national championship, while Alyssa Jerome is staying for a fifth year.

Wilson, the Pac-12 Conference co-Defensive Player of the Year who moved into the starting lineup last season, and Jerome made their announcements together to The Associated Press on Monday night before attending the Jazz-Warriors game, where Golden State planned to honor Hall of Fame coach Tara VanDerveer and her team for the program's first NCAA title since 1992.

The Cardinal lost guard Kiana Williams, drafted by the WNBA's Seattle Storm with the sixth pick of the second round and 18th overall.

“It's just a really awesome opportunity to have,” said Wilson, the younger sister of Seattle Seahawks quarterback Russell Wilson. “We just came off the national championship win and to be able to be with this team again is really special. We lose Ki but we bring back a lot of people and I think the new people are going to be really great.”

The 5-foot-9 Wilson — who like Russell wears uniform No. 3 and had him cheering from the stands during the championship run in San Antonio — emerged as a lock-down defender while moving into the starting lineup with a stellar training camp.

Because of the coronavirus pandemic canceling college sports seasons last year, seniors were given the chance to have an extra year of eligibility.

“Obviously I didn't expect to come back a fifth year at Stanford but when the opportunity kind of came up I was really exited for it,” Jerome said. “I just didn't want to leave this team yet. It's such a special group of girls, so really excited.”

VanDerveer was thrilled to be at the game cheering Golden State after she reached out to outgoing COO Rick Welts. She and coach Steve Kerr have visited each other's practices in recent years.

A video tribute was shown during a first-quarter timeout featuring NCAA highlights and Kerr offering a congratulatory message to friend VanDerveer — but she actually missed it. A week out from receiving her second COVID-19 vaccine and testing daily at Stanford, she finally got into Chase Center at halftime after a false-positive test followed by a negative result.

She said: “I’m just glad it was me and not the kids. The second half is going to be great!”

“It's been amazing. We are all such Warrior fans," VanDerveer said earlier. “It's great to be here. It's really great that their team is recognizing our team, too.”