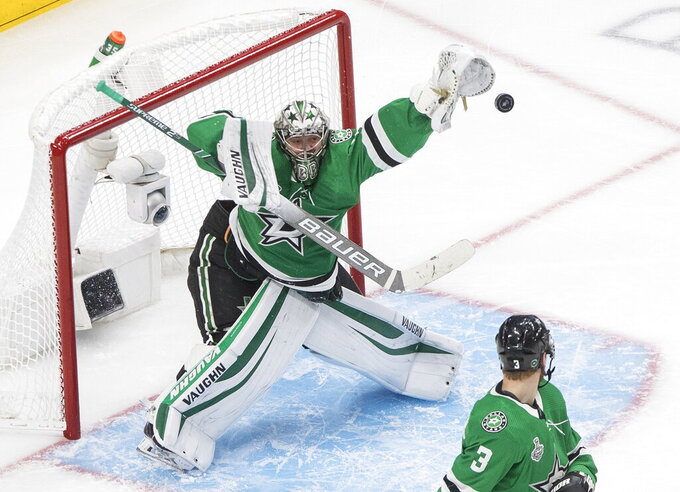 FILE - Dallas Stars goaltender Anton Khudobin (35) makes a save against the Tampa Bay Lightning during the third period of Game 4 of the NHL hockey Stanley Cup Final in Edmonton, Alberta, in this Friday, Sept. 25, 2020, file photo. Khudobin signed a $10 million, three-year contract to stay with the Stars. (Jason Franson/The Canadian Press via AP, File)

The NHL's pandemic-altered divisions were set up based on geography in the hope that reducing travel will help the games go on.

Each of the four divisions are stacked with talented teams in the professional sports league with perhaps the most parity on the planet.

The Central Division, though, has some unusual quirks: It features the defending Stanley Cup champion Tampa Bay Lightning and the runner-up Dallas Stars among its eight teams. The division is also guaranteed a new champion because St. Louis and Colorado, who finished 1-2 in the Central last season, were sent to the West Division.

“We like our team, but like every team in the league there are a lot of questions about how this is all going to work," Stars general manager Jim Nill said in a telephone interview with The Associated Press. “Who will get off to a quick start, or a slow start? Who is going to get hit hard by the injury bug. But, it's all good because we're back to the sport we love."

With some key players injured and some affected by COVID-19 this week, the Stars might get off to a slow start again. Dallas won one of its first eight games last season and had a six-game losing streak when the league paused play in March because of the pandemic.

That didn’t stunt the Stars because they lasted until Game 6 of the Stanley Cup Final.

The new-look Central also includes Carolina, Chicago, Columbus, Detroit, Florida and Nashville. They will all get to know one another well because each of the 56 games in the regular season that starts on Wednesday night and ends in early May will be within the division.

Tampa Bay is shooting to be just the fourth NHL team in three decades to repeat. The defending champions will be led by Steven Stamkos up front, Conn Smythe Trophy winner Victor Hedman on defense and Vezina Trophy finalist Andrei Vasilevskiy in net.

“It's the toughest trophy in sports to win, but it’s the best feeling in the world lifting the Cup over your head," Hedman said. “It’s contagious.”

Just days before the season is scheduled to start, a pair of Central Division teams were already affected by COVID-19.

Six Dallas players and two staff members tested positive for the coronavirus, according to the NHL, in a development that pushes back the Stars’ opener by nearly a week. The Stars were to open Jan. 14 at Florida

Columbus kept a number of players off the ice “out of abundance of caution” on Friday due to the league’s COVID-19 protocols.

The Lightning will be without last year’s leading scorer, Nikita Kucherov, who had season-ending hip surgery.

Dallas All-Star center Tyler Seguin (hip) and goaltender Ben Bishop (knee) are expected to be out for about three months of the four-month regular season.

The Blue Jackets extended their franchise record postseason streak to four last year, proving those wrong who thought losing Artemi Panarin and Sergei Bobrovsky in free agency would set them back.

To keep a talented and young player in the future, Columbus signed forward Oliver Bjorkstrand to a five-year contract extension worth $27 million to avoid this being the last season on his deal.

The Blue Jackets went looking to boost their scoring with some help at center and found it in Max Domi, who was acquired in a trade with Montreal for forward Josh Anderson.

“I think we are ready," defenseman Seth Jones said. “We’ve actually had a great group here the past few weeks skating and a lot of the guys that came in early to kind of get that groove back with each other.”

The first of eight scheduled Stanley Cup Final rematches is Jan. 17 when Tampa Bay hosts Dallas, assuming the Stars' schedule is not overhauled because of virus issues.

The defending conference champions will play consecutive games against each other four times with one potentially, interesting stretch. The Stars will face the Lightning at home Feb. 18 and 20 and after two games against other opponents, they will meet again Feb. 27 and March 1 in Florida.

With so many games against common opponents with only one day between games, teams in the division expect emotions to boil over and gloves to get dropped at times.

“Ah, yeah, I think I’m gonna be in the penalty box a little bit more than I expected, just with the hate you’re probably going to get on with a lot of these teams," Blue Jackets forward Nick Foligno said with a chuckle. “I don’t think we’re used to playing playoff series against every single team in our division."

The season-opening game is Jan. 13 in Tampa Bay, where the Lighting will raise their second Stanley Cup banner before the puck drops against the Chicago Blackhawks with up to 3,800 fans in the stands.