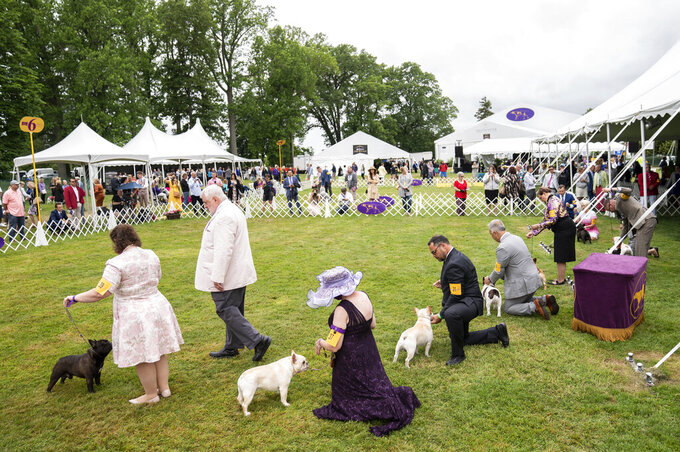 TARRYTOWN, N.Y. (AP) — The road to this year's Westminster Kennel Club dog show passed through a pandemic and a major change of date and venue. For one of the nation's best known dog handlers, the road also proved dangerous.

Bill McFadden, who has guided two Westminster winners, was rear-ended and injured while driving a van full of dogs cross-country to the show, his wife and fellow star handler, Taffe McFadden, said Saturday. He was hospitalized for a time after the crash Tuesday in Wyoming and is now recuperating at home in Acampo, California, she said. He will be off the show trail for a while.

Despite the shock and worry, “I'm really glad to be here. I wish my husband was with me,” Taffe McFadden said as she and the couple’s assistants readied their canine charges. “It's a highly coveted dog show to be at, and for them to work this hard to make it happen is pretty awesome.”

The Westminster show moved from New York City to a suburban estate, and from February to June, so it could be held outdoors as a pandemic precaution; organizers also closed the show to the public. Judging began Saturday toward the best in show prize, which will be awarded Sunday night.

Four of the seven finalists get chosen Saturday night. Semifinalists include Bono, a Havanese that made the finals last year and is handled by Taffe McFadden.

The McFaddens are one of the sport's power couples. Bill McFadden handled a bichon frise named Flynn to best in show at Westminster in 2018 and took Mick the Kerry blue terrier to the title in 2003. His wife said he was checking in constantly Saturday on the goings-on at the first Westminster he has missed in years.

She said a truck plowed into Bill McFadden's van while it was stopped in a road construction zone in Laramie, Wyoming. Messages were left Saturday with local law enforcement agencies about the crash.

The 10 dogs aboard weren’t injured, his wife said, but a veterinary chiropractor was working with them Saturday in case of any aches.

This year marks the first time the 145-year-old show is outside Manhattan. Part of the competition is usually in exhibition buildings on Hudson River piers, and the rest in Madison Square Garden.

Many owners and handlers say they and their dogs relish the fresh air and breathing room of the sprawling Lyndhurst estate in Tarrytown, New York. Still, the outdoor setting came with some challenges, including not having a power and water supply for grooming.

Some participants brought their own — the McFadden team, for instance, was set up in a parking lot with five generators, six 6-gallon jugs of water, a tent and small fenced pens for the dogs to bide time outdoors.

Others had to be a bit more catch-as-catch-can. Janet Atkins and Charles Namey bathed and blow-dried their bearded collie, Moet, at a local pet store Friday, then brushed her and did other final touches Saturday on a table outside their minivan, with plastic sheeting for a canopy.

“You make do with what you can,” said Atkins, of Winter Park, Florida.

After flying in from Toronto on Friday evening, Irina Falk was up until 2 a.m. Saturday bathing and drying her Yorkshire terriers Tim Tim and Kenzo, then got up three hours later to get to the show, fix their topknots and try to keep their silky, flowing coats fresh on a humid morning on the Lyndhurst lawn.

“I had grass on the brush, on the coat, in my dress,” she said with a smile.

Four breeds are making their Westminster debut this weekend, including the Belgian Laekenois. “Congratulations — you made history today,” judge Sharon Ann Redmer told some half-dozen Laekenois and their human partners. The herding dogs are generally known as hard-working and driven, but Saffron is also “the happiest dog on earth," says handler Trina Matteson of Silver Springs, Florida.

Jack Jack the French bulldog might not have made history. But being at Westminster is “a bucket-list item" for owner Kami Harris. She never pictured getting involved in dog shows until she got the dog as a pet, and his breeder suggested showing him.

“Ever since COVID hit, I realized how much I loved it and missed it,” says Harris, of Oregon City, Oregon. “The friendships that you make, and the people you meet — it's a community.”