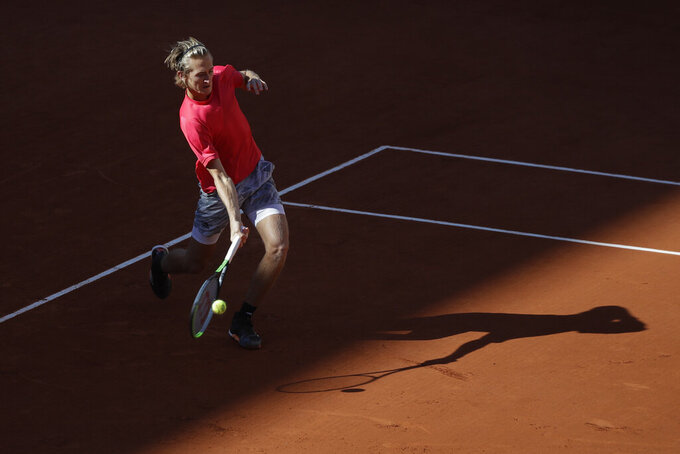 Sebastian Korda of the U.S. plays a shot against Spain's Rafael Nadal in the fourth round match of the French Open tennis tournament at the Roland Garros stadium in Paris, France, Sunday, Oct. 4, 2020. (AP Photo/Alessandra Tarantino)

It’s also rather rare for a player to go up to the net and ask the guy who just beat him for an autographed shirt.

Sebastian Korda, the 20-year-old American qualifier who lost to Rafael Nadal by the above scoreline in the French Open’s fourth round Sunday, still was beaming afterward.

“Ever since I was a kid, I mean, I was in love with him and everything about him. I would watch every single match. Doesn’t matter who he was playing or what tournament he was playing. He was the guy for me,” said Korda, whose cat is named after the 12-time champion at Roland Garros. “It was an unbelievable moment for me and I couldn’t have written it any better.”

Imagine how he might have reacted if he’d been in the room for Nadal’s post-match news conference, when this assessment of Korda was offered: “I really predict that he going to have a very good future.”

The 213th-ranked Korda was the youngest American man to make it to the fourth round in Paris since 1991 and made sure to soak up every moment in Court Philippe Chatrier on Sunday, even if wind that kept kicking loose dirt off the clay surface felt “like a tornado, sometimes,” he said.

After feeling tight in warmups, Korda -- whose father, Petr, won the 1998 Australian Open and was a finalist at the 1992 French Open, and whose mother, Regina, was ranked in the Top 30 -- loosened up and hung in there with Nadal at the outset.

OK, for one game.

Korda’s cross-court backhand winner earned a break point, but Nadal erased it with a body serve that drew a netted return. A forehand winner to cap a 10-stroke exchange earned a second break chance, and Nadal dismissed that one with a body serve, too. Soon enough, Nadal led 1-0 and essentially was on his way.

“Gave me a belief that I can keep up with him on the clay,” Korda said. “The first game was massive for me. Unfortunately, I couldn’t close it.”

Two particular moments produced by Nadal stood out to Korda. One was a running winner off the King of Clay’s famous lefty forehand. The other?

“He almost hit an around-the-net forehand,” Korda said, “and I was kind of begging for it to go in, because that would have been the coolest thing ever.”

U.S. Open runner-up Alexander Zverev complained of a slight fever and shortness of breath after his fourth-round loss at Roland Garros, but neither tournament organizers nor his opponent Sunday seemed too concerned.

About 3,000 coronavirus tests have been conducted by the French tennis federation, which put players in two Paris hotels. Players wear masks when they walk into arenas for their matches, and when they leave after, but not during play; they generally tap rackets instead of shaking hands when the contests end.

Two players — whose names were not announced — were removed from the girls’ junior tournament that started Sunday after they tested positive for the coronavirus.

The tournament said Zverev did not consult its doctors before Sunday's match, despite the symptoms he described afterward, including a temperature of 38 degrees Celsius (100.4 Fahrenheit) the previous night.

Zverev stayed up to date with his COVID-19 tests that players have been subjected to every five days, organizers said, adding that his results were all negative, his most recent test was last Tuesday and he’d been informed Sunday that he was due for another.

Sinner said that from his side of the net, Zverev seemed “quite OK, you know, because in the third and fourth set he was running quite a lot.”

“I think he’s honest guy, so if he says that he has cold or fever or whatever, I trust him,” Sinner said, downplaying any risk of infection.