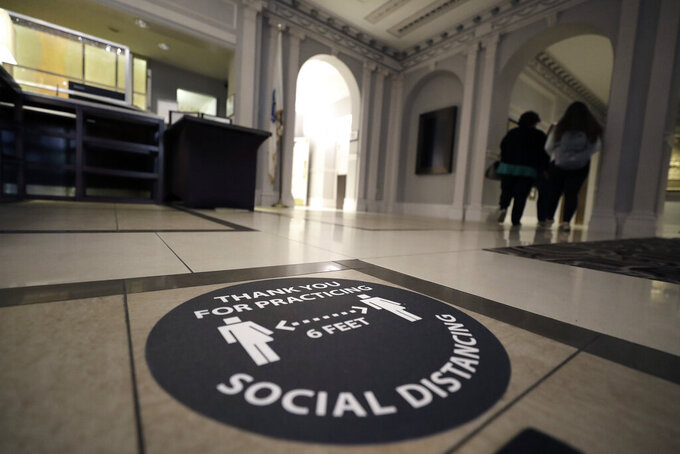 A safe distancing advisory rests on the floor of the lobby at the Sheraton Commander Hotel, in Cambridge, Mass., Wednesday, June 10, 2020. In phase 2 of the state's plan to reopen the state, beginning Monday, June 8, hotels and motels are allowed to accept all guests, not just essential workers. (AP Photo/Steven Senne)

Massachusetts is ramping up efforts to help more families put food on the table at a time when prices are rising and many have lost jobs due to the coronavirus pandemic.

“The COVID-19 pandemic has made clear the urgent needs and food supply chain issues for communities across Massachusetts,” Baker said Thursday after touring the Greater Boston Food Bank.

The grant program also seeks to ensure that farmers, fishermen and other local food producers are better connected to customers, Baker said.

Greater Boston Food Bank President Catherine D’Amato said the group used to spend about $60,000 on food, but the pandemic has pushed more people to seek help.

“We’re now spending up to $3 million a month on food,” she said during a news conference with Baker, citing both the surge in demand and a hike in food prices.

Groups that are part of the state’s local food system are eligible for grants, including production and emergency food distribution networks.

One of Boston's most luxurious hotels has let go about half its staff even though hotels in Massachusetts are now allowed to reopen under phase two of Gov. Charlie Baker's coronavirus economic recovery plan.

The nearly 200 workers laid off by the Four Seasons were told they would be able to reapply for their jobs, but some tell The Boston Globe they received less than half the severance they were entitled to.

The hotel, located on Boylston Street and overlooking the Public Garden, furloughed employees after closing March 24, then conducted the layoffs last month. It is currently taking reservations starting June 23.

The state's hotels were allowed to reopen to guests on Monday but still aren't allowed to schedule any events, functions or meetings.

“The impact of COVID-19 on the travel and hospitality industry has been devastating and Four Seasons Hotel Boston is not immune,” hotel management said in a statement. “The extreme loss of revenues has forced us to make some difficult decisions to reduce costs while managing the short- and long-term business realities. This includes permanent layoffs.”

Unite Here Local 26 President Carlos Aramayo is concerned that the layoffs are the beginning of widespread terminations in the lodging industry in an attempt to permanently eliminate jobs or start over with a lower-paid workforce. The hospitality workers’ union is assisting the Four Seasons staff, which is not unionized.

Mass layoffs in the industry would disproportionately affect people of color, he said.

With the help of the union, 46 former Four Seasons employees sent a letter to hotel management rejecting the “disrespectful, even insulting” severance offer.

Officials reported 38 new COVID-19 deaths Thursday, bringing the total number of confirmed and probable deaths in the state to 7,492. More than 104,00 people have been infected in the state.

There were 1,260 people hospitalized with COVID-19, down from about 2,112 two weeks ago. The number of people in intensive care units also fell.

The number of probable and confirmed COVID-19 deaths at long-term care homes rose to 4,705, or nearly 63% of all deaths.

For most people, the coronavirus causes mild or moderate symptoms. For some, especially older adults and people with existing health problems, it can cause more severe illness and lead to death.

More than 44,600 people filed initial claims for standard unemployment benefits in Massachusetts from May 31 to June 6.

That’s an increase of more than 17,600 over the previous week. Since March 15, nearly 969,000 initial claims have been filed for standard unemployment benefits.

Since April 20, more than 594,000 individuals have filed claims for the pandemic insurance.