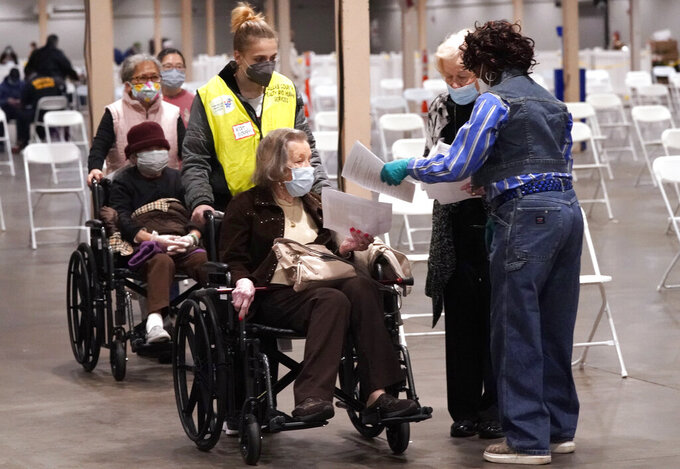 FILE - In this Jan. 20, 2021, file photo, elderly wait in wheel chairs as their paper work is checked before receiving a COVID-19 vaccine at a Dallas County mass vaccination site at Fair Park in Dallas. As the nation's COVID-19 vaccination campaign accelerates, governors, public health directors and committees advising them are holding key discussions behind closed doors, including debates about who should be eligible for the shots and how to best distribute them. (AP Photo/LM Otero, File)

IOWA CITY, Iowa (AP) — As the nation's COVID-19 vaccination campaign accelerates, governors, public health directors and committees advising them are holding key discussions behind closed doors, including debates about who should be eligible for the shots and how best to distribute them.

A review by The Associated Press finds that advisory committees created to help determine how to prioritize limited doses have held closed meetings in at least 13 states that are home to more than 70 million people.

In at least 15 other states, the meetings have been open to the public, the AP found. But even in those states, governors and health departments can modify or override committee recommendations with little or no public explanation. In several others, governors and their staffs make decisions without formal advisory bodies to guide them.

The lack of transparency raises the risk that some decisions will be grounded in politics rather than public health and that well-connected industries could receive special treatment while the concerns of marginalized groups are ignored.

“You don’t want to have ‘God squads’ making these decisions about life and death without any kind of public oversight or public accountability,” said Oregon State University professor Courtney Campbell, an expert in bioethics.

In Iowa, the governor moved legislators and other Capitol employees ahead of inmates and correctional officers on the vaccine priority list, despite at least 19 coronavirus deaths among state prisoners and staff. In Oregon, the governor prioritized teachers for shots before the elderly without seeking a recommendation from an advisory committee that has debated other sensitive topics publicly.

Campbell praised the Oregon panel's transparency and commitment to equity but criticized the lack of public deliberation that went into the decision on teachers. “You want to know what groups are prioritized but also what evidence is used scientifically to determine which should go first and their reasoning process,” he said.

The federal Advisory Committee on Immunization Practices has recommended that states “promote transparency” as one of four ethical principles in vaccine allocation programs. The committee advised in November that decisions and plans “must be evidence-based, clear, understandable and publicly available,” and that public participation in their creation and review should occur to the extent possible.

Public distrust of government has been a major problem throughout the pandemic, and “you want to take those kinds of factors that contribute to public suspicion out of the equation,” Campbell said.

When Texas’ vaccine panel met last month, the subject of equity surfaced. One member said that obtaining racial and ethnic data on vaccinations would be critical to assessing whether the state’s efforts were succeeding.

But the identity of that member — and where that discussion wound up — is unknown. That the topic was mentioned at all is known only because of meeting notes that state health officials provide through open records requests but do not post publicly.

The notes also mentioned worries about elderly residents who are unable to stand in line and concern over dry-ice freezers used to store vaccines. But the three-hour panel meetings that occur most Mondays are not open to the public, leaving the state’s 30 million residents in the dark about how decisions are made.

Across the country, officials say they closed the meetings so that health experts, industry representatives and other panel members can have free-wheeling discussions on sensitive topics.

“It’s really to kind of foster an open exchange among the panelists and allow them to be frank,” said Chris Van Deusen, a spokesman for the Texas Department of State Health Services.

States cite various exemptions to open meetings laws as legal justification to meet in secret, and some eventually release minutes and panel recommendations.

In Minnesota, the state health department says opening meetings would not “provide space for candid conversations and consideration of a variety of viewpoints.” In Iowa, the state public health director said its advisory committee met in secret so members could speak without fear of public criticism.

“Because these are internal, advisory working groups, their meetings are not public,” a Pennsylvania spokesman said of the state's three vaccine committees.

Some states would not explain their rationale for secrecy.

Several states do not have an advisory panel, including Maryland. A spokesman for Republican Gov. Larry Hogan said state health officials make vaccine allocation decisions based on federal guidelines, but he would not identify those officials. Democratic lawmakers have blasted the confusion surrounding vaccine access, administration and distribution in the state.

Connecticut’s advisory panel has been meeting in public after acknowledging that it unintentionally held a closed meeting in December when it voted on a recommendation for how the governor should distribute the first vaccine doses.

When a Missouri official confirmed at a public meeting last week that the state ranked dead last in COVID-19 vaccine distribution, it marked a striking moment of transparency and accountability. Missouri opened its advisory committee meetings last month, only after media outlets questioned why several prior meetings had been held behind closed doors without any public notice.

Last week, members of the public listened and asked questions as the committee discussed several issues, ranging from whether those with Type 2 diabetes should be eligible for the vaccine before those with Type 1 and how to best use shots leftover due to missed appointments.

Public health official Adam Crumbliss outlined strategies to improve Missouri’s last-place ranking for vaccine distribution, which he partially blamed on confusion in the final days of the Trump administration and a slow deployment of shots to nursing homes by pharmacy chains.

Iowa Public Health Association Director Lina Tucker Reinders, who was a member of Iowa’s advisory panel, said she understood the rationale for closing meetings but would have had no problem if they were public.

She said she was frustrated that Gov. Kim Reynolds ultimately modified the panel's recommendations, including by expanding eligibility for shots from age 75 to 65 before supplies were available and prioritizing state Capitol workers ahead of inmates and prison staff.