Sterling K. Brown finds his balance in when to speak out 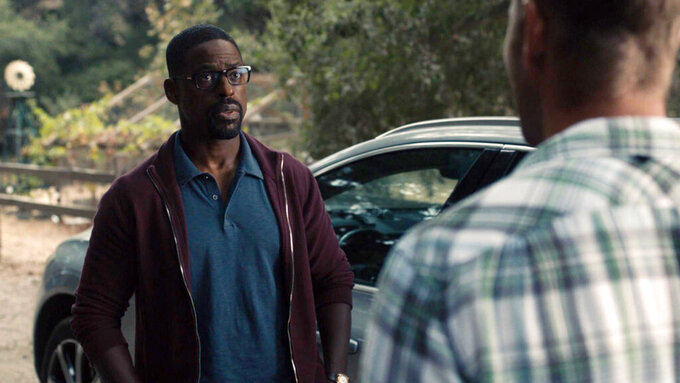 This image released by NBC shows Sterling K. Brown in a scene from "This Is Us." Season five debuts Tuesday and will address the pandemic and Black Lives Matter movement. (NBC via AP) 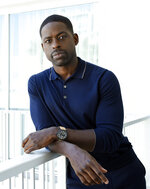 NEW YORK (AP) — Season five of NBC's “This Is Us,” debuts Tuesday and viewers will get to see the Pearson family as they navigate both the pandemic and Black Lives Matter movement. Sterling K. Brown, who plays Randall Pearson, says he can relate to how his character — a Black man who was adopted into a white family —feels in the aftermath of the deaths of Ahmaud Arbery, Breonna Taylor and George Floyd, as his white TV relatives look to him on what they should do to make him feel better.

Brown says he received “tons of phone calls from white friends saying, ‘What can I do? Let me know? Is there something I should be doing?’ and it's like, ‘Guys, I appreciate where your heart is, I really do, but I've got like every other white person calling me saying this. I need you to go pick up ‘White Fragility’ (by Robin DiAngelo.) I don't know. Do what you've got to do, but I kind of just need a break. You don't realize you're inundating me, in a very sweet way, but I'm still trying to figure out what my next step is.' It's hard enough to represent yourself rather than represent all of Black America," he said.

In an interview with The Associated Press, Brown spoke about becoming a celebrity who people suddenly want to hear from, his hiatus in quarantine and appearing in “A West Wing Special to Benefit When We All Vote,” as a former “West Wing” super fan. Answers have been edited for length and clarity.

AP: What does it feel like to be someone who people want to know your opinions?

Brown: There was this Dave Chappelle joke about how people always want to know what celebrities have to say and MTV interviewed Ja Rule about 9/11. And I'm like, ‘Am I Ja Rule now? Is this what’s happening to me?' But I do feel like silence in the face of inequality is complicity, and I don't want anyone to think I think the status quo is OK. So there is some pressure to have something to say. You want to inform yourself to what's going on in the world, have an opinion and be able to defend yourself.

AP: This is a somewhat recent shift for you, too.

Brown: For the first 14, 15 years of my career it was just show up, say your lines and then you go home. Now, in the past five-six years it's been like, ‘Well, what do you think?’ But, don't cry for me Argentina. Sometimes the best comment you can make is to have no comment. Don't speak about things you're not as versed in.

AP: What was your long hiatus from “This Is Us” like when you're usually working on other projects?

Brown: It was the longest break I've had in six years. I was home so much to the point where my oldest son (9-year-old Andrew) got a little annoyed with me. He was like ‘Dude, you’re always around.' I was like, ‘This is cool, right? Let's play some Madden.' He was like, ‘Uh, I’m trying to do this Fortnite thing with my friends.' And the baby Amare, he's not a baby, he's 5. But he was full of joy and sunshine. We just graduated from the balance bike to the big bike. My wife and I had a wonderful time but in that, a wonderful, difficult time. When you're used to going away and coming back, you have a rhythm. And when that rhythm was broken it was a little like, ‘Why are you here?’ ‘Why are YOU here?’ And then we realized ‘Oh, man. We kind of missed each other a little bit.’

AP: Did you watch a lot of TV?

Brown: So much. It's an occupational necessity. You're in too many rooms with people you want to collaborate with. If you don't know their work, then you don't have anything to say. But it also works well for someone who has been addicted to the medium since the days of yore.

AP: Let's discuss “The West Wing” special for HBO Max. What was that experience like for you? (Brown played chief of staff Leo McGarry, a character originally portrayed by the late John Spencer.)

Brown: Tommy (Schlamme) and Aaron (Sorkin) called me and they were like, ‘We were wondering if you would play the role of Leo.’ I’m like, ‘You know I’m 44-years-old.’ And they’re like, ‘Yeah, OK, no problem.’ And the fact that I was even asked was a tremendous offer. Like, honestly, that was my show, you know? It’s a perfect example of the kind of art where it doesn’t necessarily show a reflection of the way life as it is, but life as it could be, you know, an idealized version or something like it. And, it’s acting crushes that I’ve had for years. I’m now sharing a space with these people. It exceeded expectations because Martin Sheen is 80 years old. That old Jed Bartlett shows up and he is ice cold. He has the most lines in the episode by far and he's talking about chess moves and people in India who introduced things and just tricky stuff and he was like (snaps his fingers three times.) I was like, ‘Oh, so this is what’s happening.’ And like everybody else saw and they’re like, ‘Yeah, we’re not going to let the president just blow us all away.’ So everybody started rehearsing their scenes by their trailers outside with their PPE on. I didn't have much to do in the episode but I was like, ‘Can I just sit in the audience and watch?’ I was like a kid in a candy store.