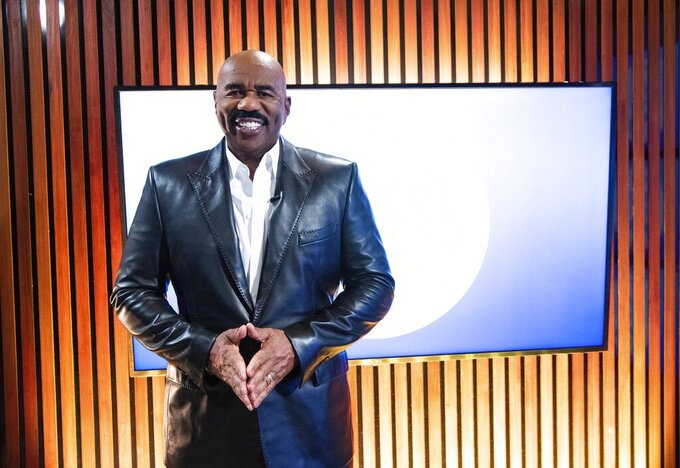 Steve Harvey poses for a portrait on Thursday, Sept. 17, 2020 in Atlanta. Harvey says his daytime talk show being canceled by NBC opened up new doors with Facebook Watch. The comedian launched “Steve on Watch" on the streaming platform. (Photo by Paul R. Giunta/Invision/AP) 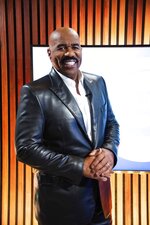 While he waited for a new opportunity, the comedian continued to make his presence regularly felt on TV as the host of “Family Feud” and as an emcee for multiple recurring jobs, including the annual Miss Universe pageant.

It didn’t take long for Harvey to seal a deal with Facebook Watch and launch the new talk show “Steve on Watch.” The first season debuted at the beginning of 2020 with strong numbers, and has already started releasing episodes of the second season, which premiered this month on the streaming platform.

The new season was taped from Harvey’s Atlanta home in a newly constructed set to adapt to the coronavirus pandemic. The production features about 50 live virtual audience members through Zoom as Harvey delves into human interest stories, viral sensations and interviews with celebrity guests including Gabrielle Union, Jack Black and Steph Curry.

In an interview with The Associated Press, Harvey opened up about his split with NBC, how Facebook has given him more creative control and his thoughts on Ellen DeGeneres, a fellow talk show host who was accused of having a toxic work environment.

AP: What were your initial thoughts after NBC canceled your talk show?

Harvey: One of my buddies called me and said “Maybe you should do a letter writing campaign?” I said “No, I’m not going to do that.” People would say you should go up there and talk to them and sit down. I’m not doing none of that. I move on. I was on a talk show for seven years... Seven’s a good run.

AP: Why weren't you stressed over NBC’s decision?

Harvey: My life is a testament to people who are watching me, especially young people. Life evolves all the time and it always changes. You got two things you can do with change: You can react to the change or you could participate in the change. I don’t react. I participate. I saw it coming. They had leaked it a year before that they were going to let the show go and replace it. I just went to work. I just kept on doing what I was doing. Sometimes when you get rid of something good, you might end up getting rid of yourself.

AP: Your facial expression is saying a lot right now...

AP: Do you have more creative control at Facebook?

Harvey: Absolutely. They understood. Let’s just take away all of the trimmings and let’s get to what this guy really does. Let’s play to his strong suits. They come up with a format where I can do just that. These human-interest stories, I do well with everyday people. I talk to people on different levels.

AP: How did your relationship with Facebook come together?

Harvey: I don’t really know how the talks initiated. I think when they heard that I was leaving NBC, I think between them and IMG (Harvey’s producing partner), some conversations started. I was doing really well digitally out there. I was actually getting more visitors and more views on my digital platform than I was on the TV show. I think the global recognition kind of put the two of us together.

AP: According to Facebook, your first season had 22 million unique viewers. Did that give you confirmation about your show?

Harvey: I never lost faith in the process of who I am as a talent or what I’m able to do with the right team around me. Facebook Watch did a really smart thing. They surrounded me with top quality people. It was nothing wrong when the show got canceled on NBC. It was nothing wrong with it at all. The numbers were what they were. Anybody else could stay on TV with that. Trust and believe they can. Those same shows is on there with that number and a lesser number and still on TV.

AP: What's you biggest takeaway from the ordeal?

Harvey: I’m here to inspire people to never give up. When the door closes in your face, quit standing there beating on the door. Some doors close for a reason. My time at NBC was what it was. It was a good time. I learned a lot. It really opened the door to come to Facebook and do something that hadn’t been done before.... to take a full-fledged talk show and put it on the digital form.

AP: What did you think of allegations against Ellen DeGeneres, one of which claimed that racially insensitive remarks were made?

Harvey: She don’t need to let people drag her reputation down like this. The Ellen DeGeneres that I know.... Let me put it to you this way. I don’t care who don’t like it. I’m a 63-year-old Black man. I know racism. I don’t care where it is, you can’t fool me with it. You can’t fake me with it. You can’t slide it behind me. I’ve been around Ellen way too many times... Ellen DeGeneres is one of the coolest people I’ve ever met in this business.