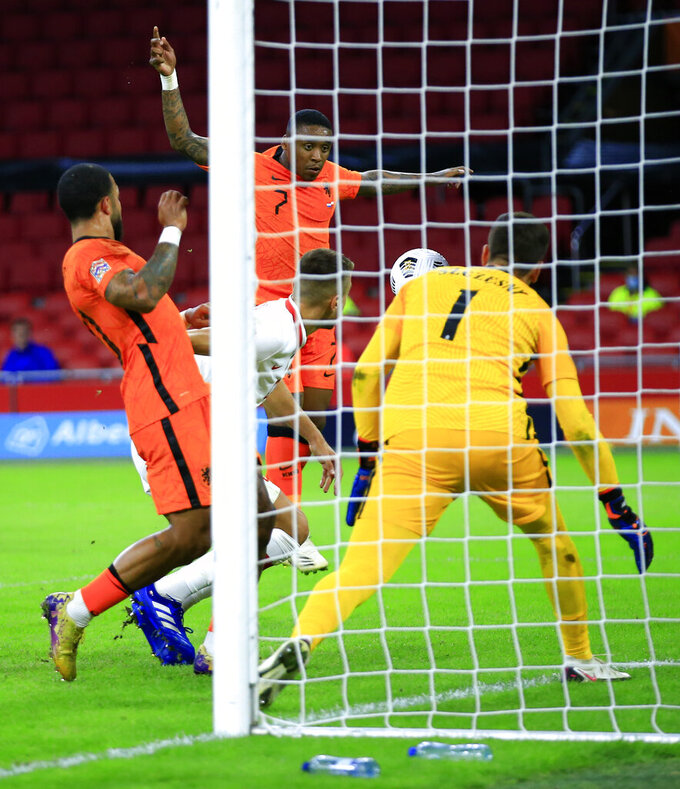 The Tottenham winger finished from close range after Hans Hateboer volleyed a pass from Frenkie de Jong back across the face of the goal in the 61st minute . It was both teams' first outing since the coronavirus pandemic slammed the brakes on international soccer.

“Hopefully the fans can come back to the stadiums soon and create some atmosphere,” said captain Virgil van Dijk.

The Netherlands, playing its first international under interim coach Dwight Lodeweges following the departure of Ronald Koeman to take the reins at Barcelona, dominated the match and could have scored more. Frenkie de Jong hit the post on the stroke of halftime after controlling a clever pass over the Poland defense by Memphis Depay on his chest.

Van Dijk said the players are already used to working with Lodeweges, who was Koeman's assistant.

“Dwight Lodeweges is the boss. You can see that he has our respect,” Van Dijk said.

Italy was held to a 1-1 draw by Bosnia in the night's other League A Group 1 match.

The Netherlands reached the final of the inaugural Nations League last year, where it lost 1-0 to Portugal under Koeman.

Lodeweges had to rebuild his defense in the absence of Matthijs de Ligt, Stefan de Vrij, Denzel Dumfries and Daley Blind, but with Poland resting its captain and star striker Robert Lewandowski the Dutch defense was rarely troubled.

“You see that some things are a bit rusty,” Lodeweges said. “It's nine months since we were together.”

Depay, rumored to be a transfer target for Koeman at Barcelona, was a constant threat as he drifted between the midfield and attacking lines but fired his only clear chance well wide.

The Netherlands plays Italy on Monday in Amsterdam, while Poland faces Bosnia in Zenica.