Stocks off to a mixed start despite gains in tech sector 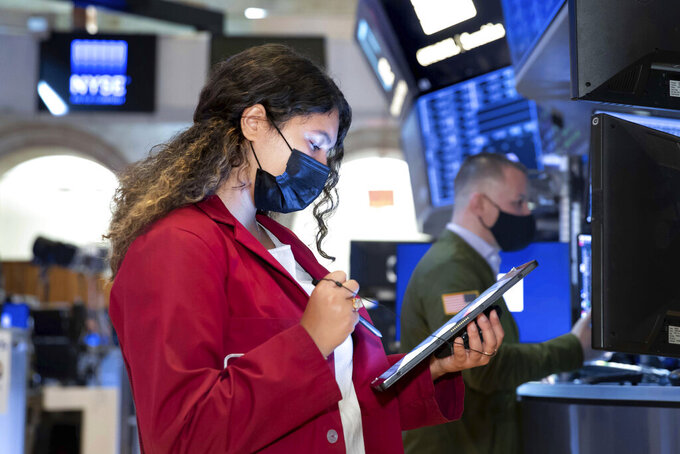 In this photo provided by the New York Stock Exchange, trader Ashley Lara works on the floor, Tuesday June 1, 2021. Stocks were mostly higher Tuesday morning as investors returned from a three-day holiday weekend in the U.S, helped by economic data that showed manufacturing growing steadily as the coronavirus pandemic wanes in the U.S. (Nicole Pereira/New York Stock Exchange via AP)

Stocks are off to a mixed start on Wall Street as gains for technology companies are checked by losses in banks, industrial companies and other sectors. The S&P 500 was little changed in the first few minutes of trading Wednesday, while the tech-heavy Nasdaq was up less than 0.1%. The Dow Jones Industrial Average was flitting between small gains and losses, and the Russell 2000, which tracks smaller companies, was down 0.2%. Zoom Video Communications was up 0.5% after reporting another strong quarter of results. European indexes were modestly higher and Asian markets closed mostly lower. Treasury yields slipped.

TOKYO (AP) — Global shares were mixed on Wednesday after Wall Street reopened from the Memorial Day holiday on a lackluster note.

Market players are looking ahead to U.S. jobs data, which are also likely to show growth. They’re also keeping an eye on comments by Federal Reserve officials on inflation, a concern overhanging markets as economies regain momentum with the rollout of coronavirus vaccines, especially in the United States.

India's Sensex declined 0.7%. Shares rose in Jakarta, were little changed in Taiwan, but fell in Singapore.

Economies are bouncing back rapidly from the damage and disruptions caused by the pandemic, analysts say.

“The speed of recovery bears little resemblance to those from past downturns, which should give some hope that less economic scarring will result,” RaboResearch said in a market commentary.

Progress lags in Japan and much of Asia, where vaccination programs have lagged, though they are beginning to pick up speed, opening up inoculations at mass sites to the general population, not just the elderly and health workers.

Expectations that the upcoming Labor Department report due out Friday will show a strong increase in hiring in May have added to worries about inflation and how the Federal Reserve may respond to it. The concern is that the global recovery could be hampered if governments and central banks have to withdraw stimulus to combat rising prices.

Oil prices have surged to two-year highs as demand has surged with a resumption of travel, especially in the U.S.