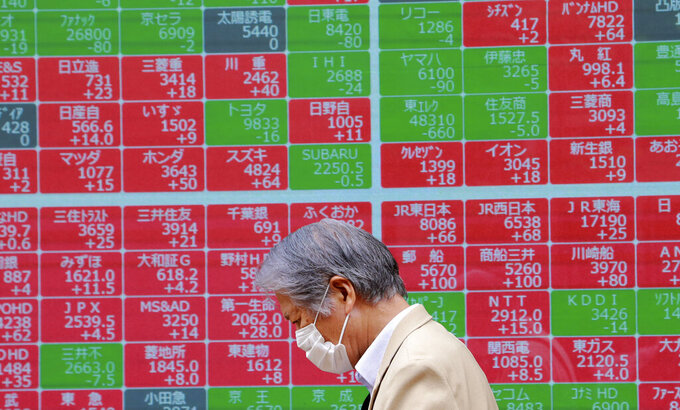 A man walks by an electronic stock board of a securities firm in Tokyo, Monday, June 28, 2021. Asian stock markets declined Monday after Wall Street hit a new high as investors looked ahead to manufacturing indicators from Japan, China and South Korea.( (AP Photo/Koji Sasahara)

Stocks are off to a mixed start on Wall Street as the market regroups following the biggest weekly gain for the S&P 500 since February. The benchmark index was up less than 0.1% in the first few minutes of trading Monday. The Dow Jones Industrial Average slipped 0.3%, while gains for several big technology companies helped push the Nasdaq Composite up 0.7%. European markets mostly fell and Asian markets closed mostly lower. Crude oil prices were down slightly but were still up sharply for the year. Bond prices rose. The yield on the 10-year Treasury note fell to 1.50%.

That gain “is generally telling of improving sentiment,” said Mizuho Bank in a report.

Investors have been encouraged by progress in Washington on an infrastructure spending plan, which followed a recovery from the jolt to markets last week when the Federal Reserve said it might start raising interest rates sooner than expected.

The Hang Seng in Hong Kong closed down less than 0.1% at 29,268.30 after the start of trading was delayed until the afternoon due to a weather alert.

In energy markets, benchmark U.S. crude lost 12 cents to $73.93 per barrel in electronic trading on the New York Mercantile Exchange. The contract rose 75 cents to $74.05 a barrel Friday. Brent crude, the basis for international oil prices, shed 19 cents to $75.19 per barrel in London. It gained 62 cents the previous session to $76.18.