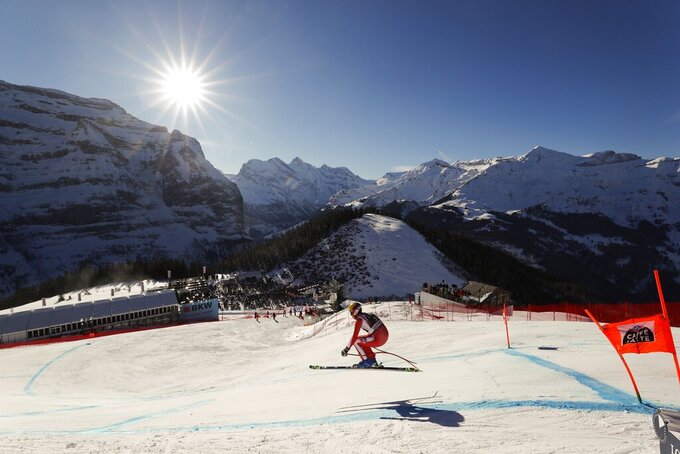 FILE - In this Saturday, Jan. 19, 2019 file photo, Monaco's Arnaud Alessandria speeds down the course during an alpine ski, men's World Cup downhill in Wengen, Switzerland. The signature Alpine skiing race in Switzerland risks being dropped from the World Cup schedule in a money dispute with the national ski federation. Organizers traded statements with Swiss-Ski on Wednesday May 20, 2020, and confirmed their ongoing legal case at the Court of Arbitration for Sport. (AP Photo/Gabriele Facciotti, File)

GENEVA (AP) — Switzerland's signature ski race was canceled Monday after a rise in COVID-19 infections was blamed partly on tourists from Britain.

Wengen was to host three races on the iconic Lauberhorn mountain from Friday to Sunday.

The classic men’s downhill scheduled for Saturday — on a scenic course that is the longest on the World Cup circuit — typically draws 30,000 spectators and one of the biggest audiences each year on Swiss television.

The widely expected cancellation was confirmed by the Swiss ski federation. It followed a second day of talks between the International Ski Federation and local organizers with health officials in Bern.

“The canton is concerned by the speed at which the virus is spreading,” authorities said, citing a rise in cases from almost zero to 60 in Wengen within four weeks.

Authorities blamed the rise mainly on a mutation of the virus originating in Britain which is more easily transmitted.

Wengen has long been popular with British visitors who helped create ski tourism in the 1920s, using the cog railway that stops there before rising toward the Jungfrau and Eiger mountains.

“The residents of Wengen are urged to stay at home as much as possible and avoid contact with people other than members of their household,” the canton said.

The cancellations came before hundreds of athletes and team officials were due to arrive.

This was to be the 91st Lauberhorn meeting. Wengen has been a men’s World Cup fixture since the circuit started in January 1967, and footage from the 1969 race was used in the Robert Redford movie “Downhill Racer.”

Switzerland will now lose its most popular ski races to neighboring Austria, where Kitzbuehel will host its classic downhill the following weekend.

Kitzbuehel will have back-to-back race weekends, the ski federation said. Two slaloms will be staged on Saturday and Sunday, followed by two downhills and a super-G. The classic Hahnenkamm downhill will retain its Saturday slot on Jan. 23, one day after the same slope stages a replacement race for the Lauberhorn downhill.

Wengen’s races are the first cancellations on the men’s or women’s World Cup circuits this season linked to the pandemic.

Schedules were modified — moving races from the United States and Canada to Europe — to protect athletes and team officials by limiting travel and contact between racers in different events.