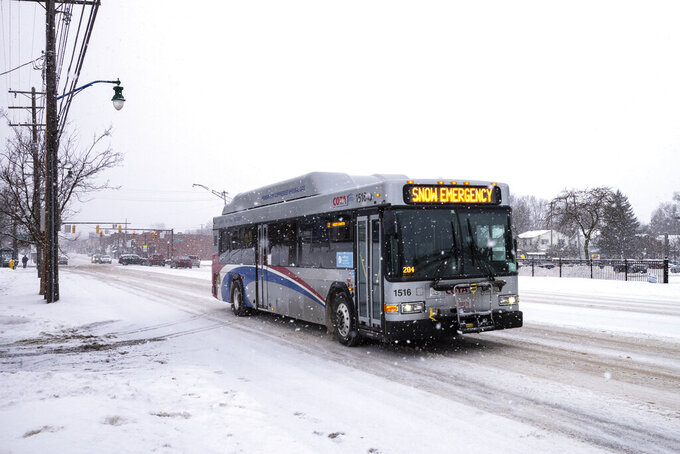 A COTA bus drives north on High Street during a snow storm on Tuesday, Feb. 16, 2021 in Columbus, Ohio. The storm dropped several inches in the Columbus area overnight. (Joshua A. Bickel /The Columbus Dispatch via AP)

TOLEDO, Ohio (AP) — Heavy snow and a coating of sleet and ice shut down several COVID-19 vaccination sites in Ohio on Tuesday. Some shipments of the vaccine could be delayed a day or two because of the weather.

The huge winter storm that walloped the South and reached all the way into New England dumped more than a foot of snow across Toledo and its surrounding counties.

At least two deaths in Ohio were blamed on the storm.

A driver on Interstate 71 in northeast Ohio’s Medina County was killed Tuesday when he slammed into the back of an Ohio Department of Transportation snow plow, said the State Highway Patrol.

Just south of Toledo, a man plowing snow with an all-terrain vehicle failed to yield to a car and was struck and killed Tuesday morning, according to the Wood County sheriff’s office.

ODOT Director Jack Marchbanks urged people to stay home if possible. “If you have to go out, please, please give our drivers enough room to do their work,” he said.

Roads in 13 northwestern Ohio counties were closed to all but emergency travel through the morning. At least three counties in southeastern Ohio also were under Level 3 snow emergencies.

While snowfall totals were less in the rest of the state, much of Ohio was dealing with snow, sleet and ice from the storm that moved in late Monday afternoon. Temperatures were expected to fall into the single digits Wednesday morning and more snow could be coming later in the week.

Hospitals and health clinics in Toledo, Dayton and Columbus and several counties in western Ohio canceled their COVID-19 vaccination appointments on Tuesday and were rescheduling the shots.

In the Columbus area, appointments were being rescheduled for Wednesday or Thursday for more than 600 older adults who had been slated to get a second dose through Franklin County Public Health.

“We know it was an inconvenience for folks today ... but we just didn’t want to risk them being out in the weather,” said spokeswoman Mitzi Kline.

The rescheduling won’t affect other appointments this week, she said.

This week’s winter storm has delayed shipments of some doses of the vaccine, Ohio Gov. Mike DeWine said Tuesday as he also suggested an online scheduling tool for Ohioans still isn’t ready to roll out.

Coronavirus vaccines sent directly to providers would be slowed by one or two days, DeWine said.

Doses that the state repackages and sends to smaller distributors are being made on a two-hour delay. The weather will “slow down for at least a little while the number of people who can be vaccinated in Ohio,” DeWine said.

At the Ohio Statehouse in Columbus, lawmakers canceled more than a dozen legislative meetings scheduled for Tuesday. The House canceled all of its committee work while some Senate committee hearings were delayed or rescheduled for later in the week.