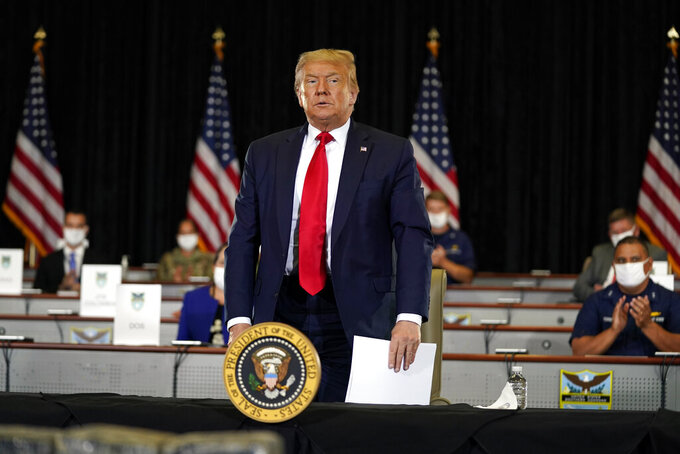 MIAMI (AP) — Friday was supposed to be the day President Donald Trump's campaign reboot itself got a reboot. Instead, it hit another snag.

Amid uncertainty over whether he can still draw big and enthusiastic crowds to his signature rallies in the coronavirus era, Trump postponed a planned Saturday rally in Portsmouth, New Hampshire, citing a tropical storm expected to hit a swath of the Eastern United States.

“With Tropical Storm Fay heading towards the Great State of New Hampshire this weekend, we are forced to reschedule our Portsmouth, New Hampshire Rally at the Portsmouth International Airport at Pease,” Trump tweeted. "Stay safe, we will be there soon!”

The latest setback came as the Trump campaign casts about for ways to reverse its recent downward slide in the polls at a time when the president is facing widespread criticism over his handling of the pandemic and his harsh stance against those protesting racial injustice.

With growing whispers of a staff shakeup and behind-the-scenes finger-pointing among White House, campaign and Republican Party officials, the campaign has been looking for something to reverse the negative momentum.

But attack lines against Democratic rival Joe Biden have failed to get traction and attempts to get Trump back on the road have faltered. His rally in Tulsa, Oklahoma, three weeks ago was intended to mark his triumphal return to the trail, but it produced a surprisingly sparse crowd and campaign travel again was put on hold.

Trump’s visit to Florida was supposed to launch back-to-back days of high-profile campaigning but instead wound up being a one-off. He did fit in a campaign fundraiser in South Florida and events focused on government counternarcotics efforts and support for the Venezuelan people.

At his Doral event with Venezuelan expatriates, Trump courted a segment of Florida’s diverse Hispanic population by sharpening an emerging attack line: Biden might not be a socialist, but he is running past his expiration date and controlled by an ascendant liberal wing of the Democratic Party.

His visit to Florida took him to terrain where COVID-19′s surge threatens his hold on a must-win state and raises questions about Republican aims to hold their nominating convention in Jacksonville next month.

Biden pointed to Florida’s rising coronavirus cases, saying, “It is clear that Trump’s response — ignore, blame others, and distract — has come at the expense of Florida families.”

But Saturday's New Hampshire visit was more problematic. Campaign officials privately acknowledged there had been fears all along about how many people would attend the Portsmouth rally. After the disappointing turnout in Tulsa, aides were intent on avoiding a repeat.

Once the storm entered the forecast, even if the rain was expected to stop in the hours before the rally, concerns about turnout only grew. For the event’s scheduled start time Saturday evening, Weather.Com forecast a 15% chance of rain.

But there was also strong opposition to Trump’s rally among some prominent New Hampshire Republicans. Judd Gregg, who previously served New Hampshire both as a governor and senator, bluntly called Trump’s planned appearance “a mistake.”

“New Hampshire has been extremely aggressive under the governor in containing the virus,” Gregg said in an interview with The Associated Press, confirming that he had not planned to attend. “People are concerned about folks bringing the problem to us.”

Trump, with just months left before voters decide whether to reelect him, has been eager to signal that normal life can resume despite a rampaging virus that has killed more than 130,000 Americans.

Unlike the rally in Tulsa, which was held indoors where the virus more easily circulates, the rally in Portsmouth was to be partially outdoors, held in an airplane hangar open on one side with the crowd spilling out onto the tarmac before Air Force One.

Moreover, while masks were distributed in Tulsa, few rallygoers wore them after weeks of Trump deriding their use. This time, the campaign had strongly encouraged their use.

The venue was to be significantly smaller than the cavernous Tulsa arena, and aides had deliberately set lower expectations for crowd size. Before the Oklahoma event, which spurred days of protests, campaign manager Brad Parscale boasted that a million ticket requests had been received. The Tulsa fire marshal said 6,000 people attended.

New Hampshire has had a relatively low number of COVID-19 cases, while those in Oklahoma were rising before Trump arrived. Oklahoma health officials said the rally and accompanying protests “likely contributed” to a surge in infections in the city. Several campaign staffers and Secret Service agents tested positive for the virus.

Barrow reported from Atlanta. Associated Press writers Aamer Madhani in Washington and Steve Peoples in London contributed to this report.