Strasburg gets feel for pitching on the road in a pandemic 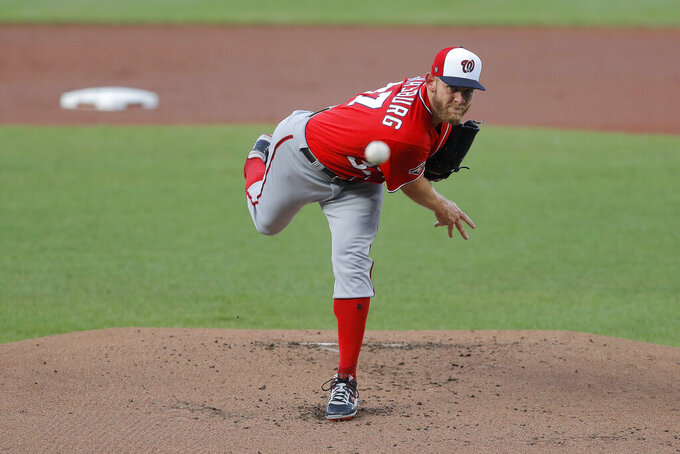 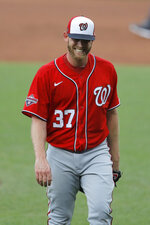 With all the protocols in place, Stephen Strasburg got a good feel Monday night for what pitching on the road will entail this season during the coronavirus pandemic.

Nationals manager Dave Martinez said the team took five buses for the 45-minute ride to Baltimore so players and staff could space out, with 14 people on each bus.

“It’s pretty intense,” Strasburg said. “You get on the bus and you have to wear a face mask the whole time. Then you get in, and basically they temperature screen you. It’s kind of tough to get a good temperature reading when it’s 100 degrees outside.

"But if you pass that, then you come into the clubhouse and everybody’s kind of sectioned off. So it’s just kind of an adjustment that we have to make. But unfortunately it’s kind of challenging to build team chemistry in an environment like this right now.”

Strasburg looked just fine on the mound, though. The right-hander struck out six, walked none and allowed one earned run.

He said it was “pretty strange” pitching with no fans in the stands.

“It’s just what we’ve got to deal with. I think we’re all competitors here, so the game out on the field doesn’t really change,” Strasburg said.

Howie Kendrick homered, doubled and drove in three runs for the defending champions.

Dr. Anthony Fauci, a Washington Nationals fan and the nation’s top infectious diseases expert, will throw out the ceremonial first pitch at the team's opener Thursday against the New York Yankees.

There may not be fans in Cleveland. There are fireworks.

The Indians are continuing the tradition of setting off blasts following each home run hit by the team at Progressive Field. The charges launched from a parking garage beyond the center-field wall echoed loudly following a three-run homer by Francisco Lindor and solo shots by Jordan Luplow, Mike Freeman and Jake Bauers in the Indians’ 11-7 win over Pittsburgh on Monday night.

Cleveland is counting on its starting pitching to carry it in the shortened season, and the Indians were pleased Mike Clevinger went five innings in his longest outing since undergoing knee surgery in February.

Right-hander Chris Paddack of the San Diego Padres earned his first career opening day start and will oppose Madison Bumgarner of the Arizona Diamondbacks on Friday night at Petco Park.

“A little cowboy showdown,” Paddack said. “I’m going to have to use my imagination and hear the 55,000 people cheering my name.”

The Milwaukee Brewers placed left-hander Brett Anderson on the injured list due to a blister on his index finger. He had been slated to start the second game of the season, Saturday against the Chicago Cubs at Wrigley Field.

Oakland Athletics lefty A.J. Puk, a top prospect, went on the injured list and traveled to Los Angeles to be examined by Dr. Neal ElAttrache for a shoulder strain. Puk's shoulder also bothered him during spring training.

The Mets put infielder Jed Lowrie on the injured list with left knee discomfort, his latest setback. He is scheduled to be examined by team medical director Dr. David Altchek.

The 36-year-old Lowrie, an All-Star in 2018 with Oakland, has hardly been able to play for New York since signing a $20 million, two-year contract. He was limited by leg injuries to eight hitless plate appearances late last season.

The Mets also placed right-hander Walker Lockett on the injured list with lower back discomfort.

Griffin Canning threw six innings of three-hit ball and struck out five as the Los Angeles Angels beat the San Diego Padres 1-0 in the first of two exhibitions between the teams.

Former Angels starter Garrett Richards allowed an unearned run on his first-inning throwing error, and gave up five hits in 4 2/3 innings while striking out five. Richards is scheduled to start Sunday at home against Arizona.

Outfielder Scott Schebler was designated for assignment by the Cincinnati Reds, who selected the contract of left-hander Brooks Raley from team's alternate training site.

Schebler hit 30 home runs for Cincinnati in 2017 but only two last year, when he battled a shoulder injury.

The Atlanta Braves signed infielder Matt Adams to a minor league contract, giving the team an option for a left-handed hitter. The move comes after Adams exercised the opt-out clause in his minor league deal with the NL East rival New York Mets.

Marlins shortstop Miguel Rojas talked about the ways the 2020 season will be different for players, with little clubhouse interaction, seats in the stands rather than the dugout and postgame meals via hotel room service.

Another change: Rojas believes Miami will be good.

He joined the Marlins in 2015 and has since endured five consecutive losing seasons. But like the team’s management and some outside observers, Rojas says the team is poised for a big leap forward in Year 3 of Derek Jeter’s rebuilding program.

“I’m really excited about the starting pitching, and our offense is way better than the last couple of years,” Rojas said. “The whole organization has been doing a great job bringing the young prospects along. It doesn’t matter if they don’t make the club right now. We know we have those guys waiting.”

Fans will get their first look — on TV only — when the Marlins play an exhibition game Tuesday at Atlanta. They begin the season Friday at Philadelphia.

Brewers reliever Justin Grimm and outfielder-first baseman Logan Morrison learned they made the team after reporting to camp as non-roster invitees.

The news was particularly sweet for Grimm, who made at least 50 appearances for the Chicago Cubs every season from 2014 to 2017 but has bounced around a few organizations since and spent all of 2019 in the minors.

“It was a long year last year,” Grimm said. “There were times I was ready to walk away from the game, just to be honest with you. But I’m just very fortunate that I have people around me who care, who helped me navigate those emotions."

UP IN THE AIR

The Colorado Rockies have a social distancing plane plan.

That’s just one of the protocols in place as the Rockies embark on their first trip of the season. They’re scheduled to play two exhibition games starting Tuesday at Texas’ new $1.2 billion stadium before opening the season against the Rangers on Friday.

“There are a lot of things in place that will sustain health and safety,” manager Bud Black said. “I can’t go through them all.”

One of them is a social distancing blueprint while up in the air.

“There won’t be a lot of interaction on the plane of players and coaches, which during the normal times you’d see conversations going on about baseball or about other things,” Black said. “It’s a great time on the plane to talk to a player or catch up with guys. You probably won’t see a lot of that this season.”