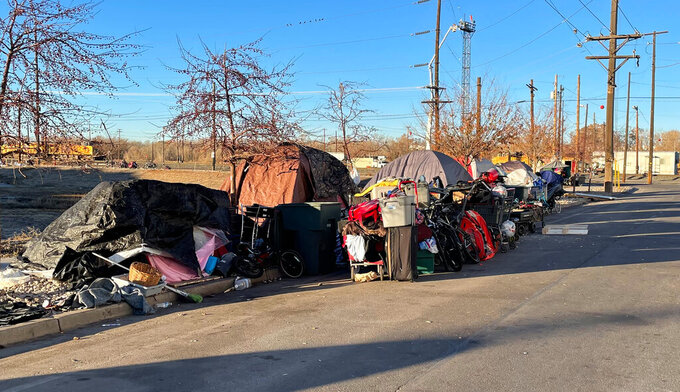 A tent city encampment along 33rd Street in Ogden, Utah, is pictured on Wednesday, Dec. 2, 2020. (Tim Vandenack/Standard-Examiner via AP)

OGDEN, Utah (AP) — At night, sleeping in his tent along 33rd Street in Ogden outside the Lantern House homeless shelter, Danny Gomez feels the bite.

“It’s real cold, cold, sometimes,” he said. He piles on the blankets, puts on a couple pair of socks and a coat, while some also top their tents with extra coverings to keep the cold air at bay.

It’s not always enough, but regardless, Gomez sees few other housing options than the burgeoning tent city that started taking shape along 33rd Street east of Pacific Avenue over the summer. “We don’t have nowhere to live, no income coming, no family to help us,” he told the Standard-Examiner.

The homeless community extends for perhaps half a block in the narrow strip of city right-of-way along both sides of 33rd Street between the street curb and sidewalk. As of last Wednesday, around 30 tents and other impromptu tent-like structures dotted the area, with bicycles, piles of belongings and overloaded shopping carts scattered among them.

“I’m freezing, but I’m around good people,” said Carmen Berg, another tent city resident. “We’re a tight-knit group. We try to help each other.”

Call it another manifestation of the COVID-19 pandemic. Lauren Navidomskis, the Lantern House director, says a few homeless in years past have at times camped along 33rd Street outside the shelter, located in an industrial and commercial area not far from the railyards that buffer west Ogden. But the numbers this year are bigger and COVID-19, she says, is a factor.

“I think it’s just the pandemic — people are fearful to come inside our facility,” Navidomskis said. That is, they worry about contracting COVID-19 inside the Lantern House notwithstanding rules about masks and testing guidelines meant to identify the sick, who are quarantined in a separate wing of the facility. So instead of entering the facility, they stay outdoors, where, rightly or wrongly, they feel more secure.

Some don’t want to submit to COVID-19 testing, which is required to stay at Lantern House, Navidomskis said. Others keep their things in tents on 33rd Street but sleep at night inside the shelter, which limits the quantity of belongings that residents can bring inside.

Eric Young, the deputy chief of the Ogden Police Department, has noticed the growth of the tent community along 33rd Street. Officials have shied from a crackdown, though city crews pass through the area weekly to clean it, requiring those present to temporarily remove their belongings.

But he doesn’t think the homeless population in the city is surging. Rather, it seems that they’ve started congregating in a centralized location rather than scattering to varied locations around the area. “It’s been a steady increase all through the summer. Even with cold weather we’ve seen large numbers of people,” Young said.

And notwithstanding the visible display of homelessness that 33rd Street has become, Young said Lantern House and other homeless shelters in Ogden have space and can accommodate more people. Anna Davidson, the homeless service advocate for the police department, meets regularly with those living along 33rd Street and tries to encourage them to take advantage of the resources available to the homeless and others in need — housing, transitional housing, job training and more.

“The resources are out there. It’s just getting people out there to access them,” Young said. “We want to see people sheltered.”

Back out on 33rd Street, the attitude among some is that they have more freedom and independence living in the homeless encampment.

Inside Lantern House, Gomez said, you literally bump heads at times with others sleeping in common areas. Outside, he went on, “you got your own privacy.”

Jimmy Lawson, who hauls his things around on a cart attached to his bicycle, lamented the restrictions inside Lantern House, even if it means using convenience store bathrooms to clean up. “They want to control my life,” he said.

Berg, who’s pregnant, said checking in to Lantern House can be a time-consuming process. “There’s more freedom in living out here,” she said. Inside Lantern House, she went on, “there’s a lot of rules I don’t like.”

They try to police themselves, keep order, said Jacob Garcia-Rader. He’s also living on 33rd Street — he intends for it to be a temporary thing.

But it can get rambunctious. “It kind of gets loud at night,” Gomez said. “We have arguing here and there. It’s like living in one big house.”

And once a week or so, a crew of Ogden City public works employees passes through and cleans the accumulated trash and debris along 33rd Street. Police provide a heads up the day before, Young said, instructing the tent city residents to move their things from alongside the street so the area can be cleaned. “It’s not to go out and pick on them,” he said.

Even so, it was a hectic scene last Tuesday as the city cleaners, wearing white coveralls, passed through, accompanied by a small contingent of police. Some of the tent city residents scrambled to remove their tents and items from the side of the road as workers gradually worked their way along the street, gathering stray trash and other items left behind and loading it all onto a truck.

“This is so stressful for everybody,” said Berg. “It makes everybody mad.”

“We lose a lot of stuff,” added Shyree Richards, who also lives on the street though she suffers from cancer.

At any rate, as soon as the cleaners finished their work last Tuesday, the tent city residents put their movable homes back in position. “This is my lifestyle. I’ve lived like this forever. It’s just a day-to-day thing,” said Chris Tanner, another resident.

The next day, last Wednesday, Matthew Robinson was out there, emerging from his tent after a night of sleep. “It may look like it’s a really tough life, but there’s beauty. You get to experience a lot of humanity,” he said, noting a man who once visited 33rd Street with a backpack full of hamburgers, passing them out to the tent city residents.

That sort of giving — of food, blankets and more — is common. “We rely on that. We pray for that,” Berg said.

But Young discourages good samaritans, however well-intentioned, from independently passing out food and other items. The public should leave it to Lantern House and other social workers equipped and trained to direct those in need to available resources. “People are trying to do the right thing. But it’s actually causing more problems,” Young said.

Squatting on the side of streets in city right-of-way is illegal and the campers could be ticketed. But officials are keeping with the softer approach of trying to nudge the tent city residents to resources and social service agencies meant to help them. Thus, the back and forth of tent city residents temporarily leaving to make way for city clean-up crews, then returning for a few days until they inevitably have to make way once again.

Garcia-Rader asks for lenience given the uncertain situation and the tough conditions the tent city residents face. “We are people who are trying to fight everyday to stay alive,” he said.