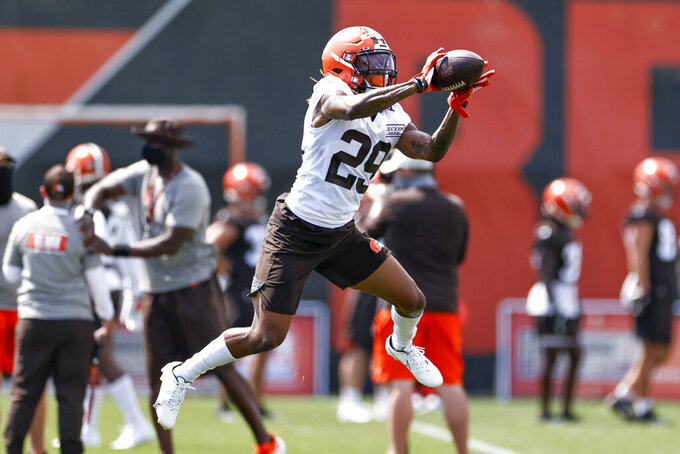 Sheldrick Redwine's passion extends way beyond the chalk-lined boundaries of a football field.

A part-time starter as a rookie, the Browns' modest second-year safety has emerged as a trusted and respected voice in a Cleveland locker room brimming with high-profile names and extroverted personalities.

During this past offseason, Redwine, a second-round pick in 2019 from Miami, was asked by first-year coach Kevin Stefanski to be on the team's social justice leadership committee, a position that has taken on even greater meaning for him in light of current events.

“I have a voice that I should use,” Redwine said Friday. “I love expressing my feelings, because it is something I hold in. But I feel like it is like a relief to me just to talk about it.”

There was a lot of heartfelt dialogue on Thursday at the Browns' training facility and across the NFL as numerous teams decided to cancel their practices to protest — and show solidarity with other sports — following the police shooting of Jacob Blake, a Black father in Wisconsin.

The Browns decided to cut their practice in half, spending the first hour on the field and the second meeting to brainstorm ideas to make meaningful change.

Redwine said those conversations with his teammates were helpful, but he wants more than talk. It's time for action, not words.

“To be honest, this is a frustrating topic for a Black man and how we live,” he said. “It's been going on for so long, and there's been repetitive attempts of trying to stop this and bring change. It seems like the way everything is structured, there is resistance toward change.”

Redwine didn't reveal any plans to protest by the Browns, andsaid there has not been any talk about refusing to play a game like NBA players did, triggering other pro athletes to protest this week.

The 23-year-old Redwine learned about racial injustice through talks with his grandfather, Credrick Pratt, who told a young Redwine about inequality and an uncle who was murdered by the Ku Klux Klan. It shaped Redwine, pushing him to want to do more to impact his race and community.

While being quarantined during the COVID-19 pandemic, Redwine educated himself and “find myself on a deeper level.” He read books on finances, meditation and watched motivational videos, which he then shared with teammates, coaches and friends.

“Because a lot of people where I am from, it is either football or nothing,” he said.

That background has molded Redwine, and he's been using those experiences to educate some of his white teammates who may not understand his drive.

“Being Black in America is tough,” he said. "I go to the store — I have dreads and tattoos — and I get followed. I have had run-ins with the police where I felt like I have been treated unfairly. I just feel like this time, it is something that we all deal with our entire life, and it is unavoidable, and it is out there.

“I just want to bring knowledge to the situation. Whatever I can do to make a change, it just has to be done. I feel like it is more than just talking. It is time for action."

He wasn't expected to start, but rookie safety Grant Delpit, a second-round pick from LSU, ruptured his right Achilles tendon this week and won't be back until 2021. Redwine said he nearly cried when he saw Delpit go down, and has been doing all he can to support his teammate.

NOTES: Starting CB Greedy Williams missed his third straight practice after leaving Monday's workout with an unspecified shoulder injury. Stefanski said the second-year defender is “day to day.” ... Center JC Tretter remains sidelined following knee surgery on the eve of camp, but Stefanski wouldn't say if he's committed to rookie Nick Harris starting the opener on Sept. 13. But with that game just two weeks away, that now seems likely. ... The Browns were forced to practice inside for the first time in training camp due to thunderstorms.