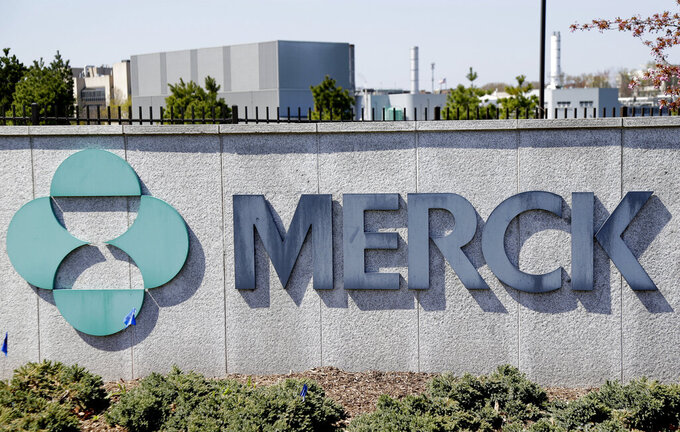 FILE- This May 1, 2018, file photo shows Merck corporate headquarters in Kenilworth, N.J. Surging sales of cancer medicines and reduced spending helped Merck overcome a big hit from the coronavirus pandemic and increase its profit 12% in the second quarter. The drugmaker on Friday, July 31, 2020, increased its financial forecast for the year, all while it’s investing in development of two experimental vaccines and a possible treatment for COVID-19. (AP Photo/Seth Wenig, File)

Drugmaker Merck, bouncing back from a $1.6 billion hit from the coronavirus pandemic in the second quarter, boosted its third-quarter profit by 55% and blew past Wall Street expectations. The strong result was due to sales slightly higher than a year ago, plus restrained spending.

Merck entered the race to fight COVID-19 later than other top drugmakers, but is focusing on creating medicines that are easier to administer and based on proven technologies. For instance, the company and partner Ridgeback Bio have begun two large late-stage trials of an experimental treatment called molnupiravir that’s in capsule form, rather than injected, which would allow COVID patients who aren’t hospitalized to take the drug at home.

Meanwhile, Merck is developing two experimental vaccines that only require one dose, unlike the many two-dose vaccines further along in human testing. The company said it’s begun an early-stage study in volunteers of a vaccine known as V591 based on measles vaccine technology. It’s also about to start early-stage human testing of V590, which uses the same technology as Merck’s approved Ebola vaccine.

Research head Roger Perlmutter, who is retiring at year-end, told analysts on a conference call that the treatment, given to several hundred COVID patients so far, “seems to be extremely well tolerated.”

The maker of cancer blockbuster Keytruda reported net income of $2.94 billion, or $1.16 per share, up from $1.9 billion, or 74 cents per share, a year earlier. Adjusted earnings came to $1.74 per share, a whopping 30 cents more than analysts expected.

“This was a good quarter for Merck, and we think the company is executing well,” Edward Jones analyst Ashtyn Evans wrote to investors, adding she’s “encouraged by the improving trends and volumes, although an increase in COVID cases across the U.S. could impact future results.”

Merck shares jumped 1.4% in early trading, but reversed to a 3 cent decline, to $78.82, by late afternoon as most of the broader markets fell.

But sales of its Gardasil vaccine, given to adolescents and adults to prevent a sexually transmitted cancer, dropped 10% to $1.9 billion because of reduced back-to-school visits for checkups.

Sales of its pneumonia vaccine, Pneumovax 23, jumped 58% to $375 million, because people concerned about catching COVID-19 and suffering complications have been getting flu and pneumonia shots to help protect themselves.

Analyst Derek Burkhard of Informa Pharma Intelligence noted that Merck still expects the spinoff of its Organon women's health business in the second quarter of 2021. That "will result in Merck becoming a slimmer, oncology-focused company,” he wrote to investors.