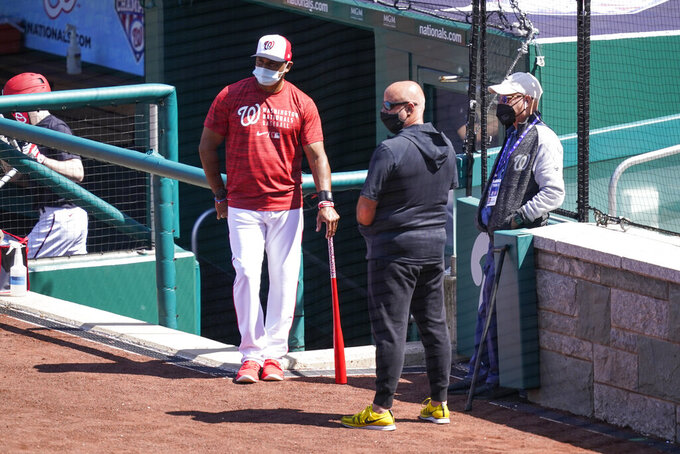 WASHINGTON (AP) — Josh Bell swung at golf-ball-sized Wiffle balls darting about at what he estimates was 75 to 95 mph. Kyle Schwarber used virtual reality goggles to study major league pitching and took some real-world hacks with the help of a tee and net delivered to his home.

Whatever it took to try to get ready for their debuts with the Washington Nationals — 11 days after the MLB season actually began.

Bell, Schwarber and Josh Harrison were reinstated from the injured list Monday by the Nationals, making the team's roster nearly whole again after a coronavirus outbreak sidelined nine players and caused postponements of four games.

“Our lineup’s intact,” manager Dave Martinez said before Washington's series opener at the St. Louis Cardinals on Monday night, when Schwarber started in left field, Bell at first base and Harrison at second — just as they had been expected to be for Game 1 of 2021.

“I talked to them this morning when they landed and asked how they were doing," said Martinez, whose team entered Monday with a 1-5 record and on a five-game losing streak. “And without hesitation, all three of them said to put them in the lineup, that they were ready to go.”

Martinez also said “most” of the Nationals got shots for the Johnson & Johnson single-dose vaccine in St. Louis at their hotel with help from MLB and the Cardinals.

Bell, Schwarber and Harrison were part of the group kept away from the rest of the club because of COVID-19 protocols. Four players tested positive for the illness shortly before the season was supposed to start, while five others were put under quarantine after contact tracing determined they might have been exposed.

The Nationals never announced which players fell into which category.

Now eight of the nine are back. The only player still missing is pitcher Jon Lester, who will prepare at the team's alternate training site in Fredericksburg, Virginia, before making his Nationals debut. Like Schwarber, he was a free agent signing from the Cubs; Bell was picked up in an offseason trade with the Pirates.

“I wouldn’t wish that on anybody, to not be able to debut with a team the way that they’d like to. But it happened, and here I am," said Bell, who noted that he lives in a “blackout zone” so wasn't able to watch his new club's first six games. "I will say that it’s good to be back.”

The 2019 champs are hoping Bell, Schwarber and Harrison can offer a bit of pop to a team shut out in three of the past four games.

Only two Nationals have homered this season: Juan Soto and Trea Turner.

“This is my opening day now. I got the butterflies,” Schwarber said. “There wasn’t a lot of sleep.”

In other roster moves Monday, infielder Luis García and outfielder Yadiel Hernandez were optioned to the alternate training site and added to the team's taxi squad for the current trip; relievers Ryne Harper and T.J. McFarland were returned to Fredericksburg, and catcher Jonathan Lucroy was designated for assignment.

Signed as a stop-gap measure with Gomes and Avila both unavailable, Lucroy showed up for his first day with the Nationals on April 6 — when they finally played their first game of the season.

Lucroy caught Max Scherzer against the Atlanta Braves that day and delivered a two-run double in Washington's 6-5 victory.