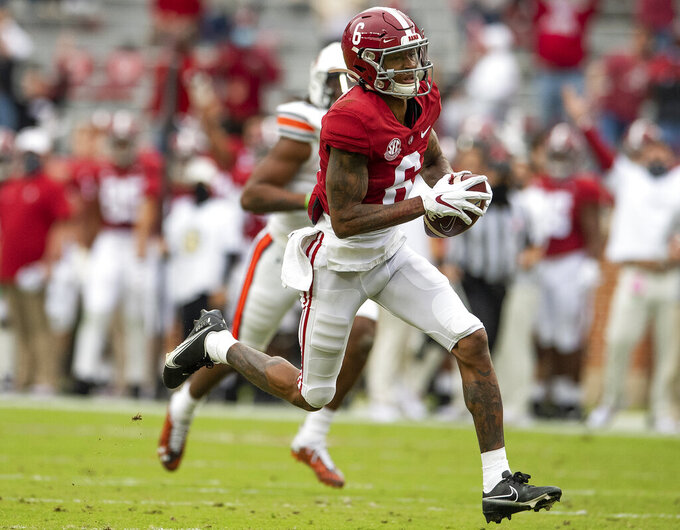 FILE - Alabama wide receiver DeVonta Smith (6) runs with a reception for a touchdown against Auburn during an NCAA college football game in Tuscaloosa, Ala, in this Saturday, Nov. 28, 2020, file photo. The Southeastern Conference championship game features two of the nation’s top playmakers, and neither is a quarterback. Alabama receiver DeVonta Smith and Florida tight end Kyle Pitts are the real stars of the league’s most potent offenses.(Mickey Welsh/The Montgomery Advertiser via AP, File)

Back in August, when there was still doubt about whether a college football would be played during the pandemic, Big 12 Commissioner Bob Bowlsby said he would look at the season as a success if he could hand out a championship trophy in December.

The virus is not going to allow for traditional trophy presentations, but Bowlsby and most of his 10 fellow commissioners in major conferences will reach that goal this weekend.

That won't be the case for the Sun Belt after its title game between No. 9 Coastal Carolina and No. 17 Louisiana-Lafayette was called off because of COVID-19 issues with the Chanticleers. Still, no league got in more of its regular season than the Sun Belt. Despite several postponements, only one regular-season Sun Belt Conference game out of 40 did not get played. Eight of 10 schools played a full, eight-game league schedule

"I think this is a successful season. There's no question about it," Sun Belt Commissioner Keith Gill said Friday. “We started the season knowing there would be disruption. We've kind of played through that disruption.”

The Sun Belt's breakout season, its first having multiple teams ranked, will end with the Chanticleers (11-0) and Ragin' Cajuns (9-1) as co-champions. Coastal won at ULL 30-27 on Oct. 14.

Gill was asked about the possibility of the two teams meeting in one of the conference's affiliated bowl games. He said it was not something he anticipated. Louisiana-Lafayette athletic director Bryan Maggard doesn't expect it to happen.

“Do I think it would be a great matchup in college football, particularly in 2020? I do. Do I think it would create a lot of interest from a viewership standpoint? I do,” Maggard said. “At the end of the day, that's going to be a decision that's out of our control.”

Coastal Carolina (CFP No. 12) still has an outside chance to grab a New Year's Six bowl bid. If not, Chanticleers coach Jamey Chadwell said, it doesn't make sense to him for the Sun Belt to have its best teams facing off in the postseason.

“Part of your bowl experience is being able to put the brand of your conference out against other conferences and compare,” said Chadwell, who dismissed any suggestion Coastal had backed out of the game to protect its unbeaten record.

As for the rest of college football, the final weekend of the regular season was down to 19 games after Florida State's visit to Wake Forest was canceled because the Seminoles would not have enough available offensive linemen.

If no other games are called off, 541 games will be played since Labor Day weekend.

Since Power Five conferences set revised schedules in late August, AP has counted 118 games that were either postponed or canceled directly because of COVID-19 issues with one or both of the participants. Some games were called more than once and some where eventually made up.

College football researcher and statistician Cody Kellner calculated 82 scheduled games were never played and 86.8% of the major college football season will be completed if no games are canceled Saturday.

If the Southeastern Conference gets through the weekend with no further disruptions, it will have completed 68 of 70 regular-season games and a title game, the highest success rate among the Power Five.

The Pac-12 fared worst in the Power Five, with its teams playing 32 games out of the 42 it hoped to complete when the conference started in early November and left no room to make up games.

“I think we all agreed that, three months ago, if you would have told us this is what we'll be able to get through, and there would be disruptions, but we would have meaningful opportunities for our student-athletes, and a chance to compete for a College Football Playoff and important bowl games, championship games, I think we all agreed we would have said, ‘OK, it’s going to be choppy, but that would be a good result,'” Pac-12 Commissioner Larry Scott said.

How much of the season has been played? According to AP research, here are the Power Five by percentage of conference season completed, assuming remaining games are played through Saturday:

Big 12 — 94.5%. Teams played 52 of 55 potential regular-season games, including 43 of 45 conference games, plus a championship game. Nine of 10 Big 12 teams played one nonconference game as planned.

Atlantic Coast Conference — 93%. Teams played 85 of 90 potential regular-season games, including 70 of 75 conference games, plus a championship game. Each of the 15 ACC teams played one nonconference game as planned.

Group of Five by percentage of conference regular-season games completed: