Sunday election in Poland a test for president and populism 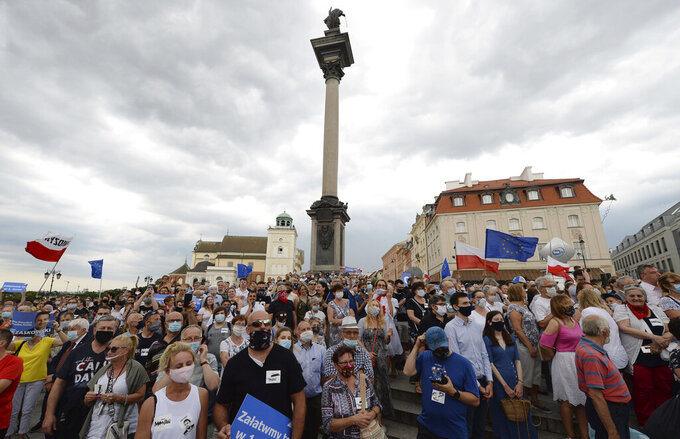 Supporters attend a rally of a candidate in Poland's presidential election, Warsaw centrist Mayor Rafal Trzaskowski on the last day of campaigning before Sunday's vote, in Castle Square in Warsaw, Poland, on Friday, June 26, 2020. Trzaskowski is a major challenger to incumbent conservative President Andrzej Duda who is seeking a second five-year term and is leading in the polls. (AP Photo/Czarek Sokolowski)

WARSAW, Poland (AP) — Poland’s right-wing president, Andrzej Duda, is fighting for a second term in an election Sunday that will test whether he was helped by a campaign that depicted LGBT rights as a dangerous “ideology” and an unconventional last-minute reception by President Donald Trump at the White House.

It will be another electoral test for populist leaders in Europe amid the coronavirus pandemic. Last weekend, Serbia's autocratic right-wing president, Aleksandar Vucic, strengthened his hold on power there in a parliamentary election that was boycotted by opposition parties.

The Polish election is widely seen as an important test for democracy, in this case in the fifth most populous country in the 27-member European Union.

A crowded field of 11 candidates — all men — could make it harder for anyone to reach the required 50% of votes on Sunday, in which case a runoff will be held July 12.

Duda is backed by Law and Justice, a nationalist, conservative party that is popular with many for introducing welfare spending programs. Those policies have eased hardships for older Poles and others left behind in the dramatic economic transformation since communism fell in 1989.

“Poland has changed. It has changed for the better," Duda said at a rally on Friday, while promising to keep working to make sure Poles achieve Western European living standards.

Duda and Law and Justice, both in power since 2015, have also triggered tensions with the EU and provoked repeated street protests at home for controversial laws giving the party control over the top courts and other key judicial bodies.

Duda, 48, who trained as a lawyer, has signed most of those changes into law, and has been derided by his critics as a “Notary” or “The Pen” for approving changes that some legal experts say violate Poland's own constitution.

“The destruction of the democratic state of law is close to completion,” said Jaroslaw Kurski, the editor of the liberal daily newspaper Gazeta Wyborcza, in an appeal this week for readers to choose a democratic candidate.

“If we, citizens, democrats, do not mobilize, the next elections will be as 'democratic' as in Belarus, Russia or Hungary,” Kurski wrote.

According to polls, Duda's biggest challenge comes from the liberal Warsaw Mayor Rafal Trzaskowski, who belongs to the pro-EU and pro-business Civic Platform party.

That party governed from 2007-15, with Donald Tusk as prime minister until 2014, when he left Poland to take on a top leadership role as president of the European Council.

Civic Platform oversaw strong economic growth but is now blamed by many for pro-market policies that helped businesses, but allowed poverty to fester and economic inequalities to grow.

On the campaign trail, Trzaskowski, 48, has promised to keep Law and Justice's popular spending programs while vowing to restore constitutional norms.

Trzaskowski entered the race late after an election originally scheduled for May 10 was scrapped due to the pandemic. Duda's strong support, bolstered by adulatory coverage in public media, began to slip once restrictions were lifted and other candidates could campaign.

As he appeared to be losing support, Duda seized on family values, vowing to protect Polish families from the propagation of “LGBT ideology” in public institutions.

LGBT activists held street protests after Duda accused the LGBT rights movement of promoting a viewpoint more dangerous than communism and saying he agreed with another conservative politician who said “LGBT is not people, it’s an ideology.”

Some Polish veterans of World War II who resisted a Nazi German occupation that considered Poles subhuman strongly denounced Duda's targeting of LGBT people as a new form of dehumanization.

Duda dropped that language in recent days, saying at a rally Friday that “in Poland there is place for everyone.”

The election will take place four days after Duda was hosted at the White House by Trump, who praised Poland for its “rule of law."

“He’s doing a terrific job. The people of Poland think the world of him,” Trump said Wednesday at a joint news conference with Duda.

However, the visit to Washington appeared to bring no breakthroughs, and it is not clear if Trump's apparent endorsement will win over undecided voters.