Super Cup between Bayern and Sevilla a test for fans 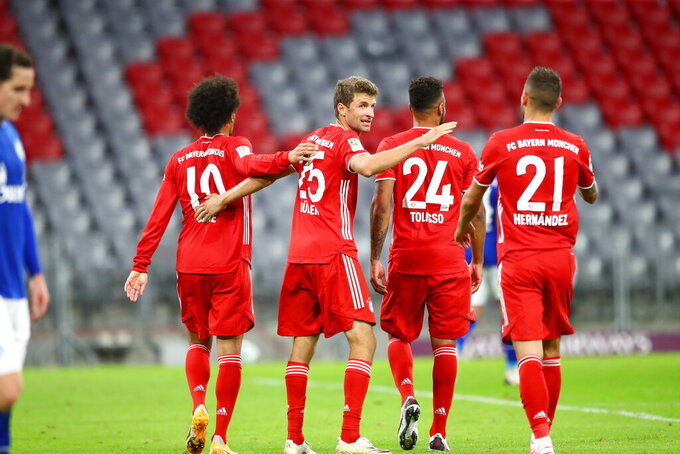 Not everyone sees it that way.

This year's Super Cup is more than just a ceremonial opener for the European soccer season. If UEFA has its way, it will usher in a return for fans in the Champions League and Europa League, too.

But that entails supporters from Champions League winner Bayern Munich and Europa League champion Sevilla flying across Europe to play for a largely symbolic trophy on Thursday in the Hungarian capital of Budapest.

After a recent rise in coronavirus cases across the continent, UEFA's plan is coming under pressure.

Some leading German politicians fear the game could spread the coronavirus. Even the mayor of Budapest doesn't want fans at the game.

“If I had the legal possibility of deciding on this issue, the match for sure would be held behind closed doors,” Budapest Mayor Gergely Karacsony told daily newspaper Nepszava for Wednesday's edition. “But I don’t have the right, so the responsibility belongs to those that do.”

“Fundamentally I think it's a bit of a wrong signal to allow so many spectators in there, in a risk area,” he told German broadcaster RTL on Wednesday.

The decision on playing with fans rests with the Hungarian national government headed by Prime Minister Viktor Orban, a devoted soccer fan who has been eager to promote his country as an island of stability during the coronavirus crisis. Hungary has also helped out UEFA by serving as a neutral venue for Champions League and Europa League qualifiers hit by virus-related restrictions elsewhere.

A recent surge in virus cases in Budapest, however, has put the capital on Germany's official list of high-risk areas. Bayern fans returning from the game will have to undergo a coronavirus test and could be required to isolate, Bavarian governor Markus Söder said Monday.

Bayern originally sold 2,100 tickets for the game out of a possible 3,000 and offered free coronavirus testing at its stadium. Hungarian authorities require anyone arriving to present a recent negative test.

About 800 of those 2,100 fans returned their tickets after German authorities discouraged them from traveling. Sevilla sold only about 500 of its allocation, so most of the crowd of up to 20,000 — 30% of stadium capacity at the Puskas Arena — will be made up of local fans from Hungary.

UEFA's decision to give the clubs an allocation for traveling fans is unusual this season. No major European league allows away ticket sales for 2020-21. England and Spain both started without any fans. Germany allows clubs to have supporters of up to 20% of capacity.

An infection spike in Munich forced Bayern to play in an empty stadium against Schalke last week, but they can still travel to Hungary for the Super Cup.

The Hungarian soccer federation has defended the decision to play the Super Cup with supporters.

“Thanks to the strict safety measures, during the match the Puskas Arena will be a safer location than any other place in the country or in all of Europe," the federation said in a statement Wednesday.

Bayern flew into Budapest on Wednesday with a full squad, including Leroy Sané, who could win his first trophy for the Munich club, and Serge Gnabry, who scored a hat trick in Friday's 8-0 rout of Schalke.

Sevilla is playing its first competitive game of 2020-21 and will likely give a debut to Ivan Rakitic after the Croatian midfielder arrived from Barcelona on Sept. 1.