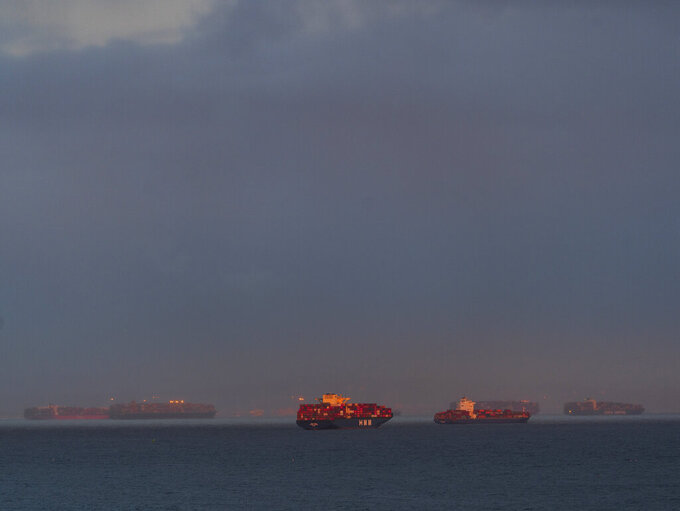 In this Wednesday, March 3, 2021 photo, a high number of container ships dot the coast of Long Beach at sunset waiting to dock at the Ports of Los Angeles and Long Beach off the California Coast. A trade bottleneck born of the COVID-19 outbreak has U.S. businesses waiting for shipments from Asia _ while off the coast of California, dozens of container ships have been anchored, unable to unload their cargo. ( AP Photo/Damian Dovarganes)

NEW YORK (AP) — A trade bottleneck born of the COVID-19 outbreak has U.S. businesses anxiously awaiting goods from Asia — while off the coast of California, dozens of container ships sit anchored, unable to unload their cargo.

The pandemic has wreaked havoc with the supply chain since early 2020, when it forced the closure of factories throughout China. The seeds of the current problems were sown last March, when Americans stayed home and dramatically changed their buying habits — instead of clothes, they bought electronics, fitness equipment and home improvement products. U.S. companies responded by flooding reopened Asian factories with orders, leading to a chain reaction of congestion and snags at ports and freight hubs across the country as the goods began arriving.

Main Street businesses are now forced to wait months instead of the usual weeks for a delivery from China, and no one knows when the situation will be resolved. Owners do a lot of explaining to customers, order more inventory than usual and lower their expectations for when their shipments will arrive.

Alejandro Bras used to be able to place an order to factories in China and expect to receive his products in 30 days. Now, with problems throughout the supply chain, “we’re adding an additional two months,” he says. And that two months is “iffy” — it can take even longer.

Bras’ company, Womple Studios, sells monthly subscription boxes with educational crafts and activities for children; many of the products are custom-made, so he can’t easily find substitutes.

Bras has found himself spending more time on logistics rather than product development, and more time apologizing to the Oakland, California, company’s customers who expect a shipment each month. Customers have been understanding — they realize the pandemic has upset shipping and trade worldwide.

The cluster of ships offshore are perhaps the most dramatic symptom of an overwhelmed supply chain. As production surged in Asia, more ships began arriving in the fall at ports in Los Angeles, Long Beach and other West Coast cities than the gateways could handle. Ships holding as many as 14,000 containers have sat offshore, some of them for over a week. At times there have been as many as 40 ships waiting; normally, there’s no more than a handful, according to the Marine Exchange of Southern California, a service that monitors port traffic and operations.

“With this type of backlog, it will take several weeks to work through that. It doesn’t go away. And new ships are sailing to the U.S. even as we speak,” says Shanton Wilcox, a manufacturing adviser with PA Consulting.

But there are choke points on land as well. It can take 8,000 trucks to haul the cargo away from a ship, says Kip Louttit, executive director of the Marine Exchange of Southern California. But when all those trucks hit the road, there aren’t enough available when dockworkers are trying to unload the next ships in port. Freight rail traffic has also been affected.

“When you have more cargo, you have a less efficient cargo moving system,” Louttit says. The pandemic itself is also slowing down the flow of goods, sidelining workers in warehouses at the ports, he says.

Put all the problems together, and when a ship gets into port, it takes five to seven days to unload instead of two to three, says Shruti Gupta, an industrial analyst with the consulting firm RSM. “That again has consequences on truckers and rail service, because they have to wait until the port clears,” she says.

Businesses also wait because of the high demand for space on ships, and inside the shipping containers that range from 20 to 45 feet long.

“Normally a shipment can be booked with a couple days’ notice and currently you have to book containers 30 days in advance,” says Peter Mann, CEO of Oransi, a maker of air purifiers and filters based in Raleigh, North Carolina. He has to account for shipment times twice as long as normal in his operating plans.

When Mann began having trouble getting shipments in the fall, he decided to place larger orders — getting the goods manufactured wasn’t a problem and fewer deliveries meant less waiting time. It has meant investing more money in inventory.

Supply disruptions can be a more serious problem for smaller companies because, unlike larger players, they may not be able to shift production to other countries — for example, Western Hemisphere nations whose products can be shipped to East Coast ports. And big companies can better afford to use air freight, which is more expensive than shipping.

Because there’s so much competition for containers, the cost of importing is climbing.

“The price can be as much as five times as usual,” says Craig Wolfe, whose company, CelebriDucks, has had problems getting rubber ducks from China since the start of the pandemic.

One of Wolfe’s shipments sat on the dock for three weeks because there were no railcars available. Another that he expected to be shipped by mid-February still hasn’t left China.

“It would have arrived by now,” says Wolfe, whose company is based in Kelseyville, California. He’s anxious because most of his products aren’t typical rubber ducks — they’re based on presidents and other celebrities and pop culture trends like the Harry Potter books and movies. Like Mann, he’s placed some larger-than-usual orders to be sure he has enough stock.

Exporters are also feeling the impact of the bottlenecks. When containers are unloaded at the ports, many are being sent empty back to Asia instead of being held and filled with U.S. goods.

Isaiah Industries sells its metal roofs to Japan, “but we’re having huge delays getting containers scheduled to ship to them. So, we’re sitting here with orders and product to fill those orders but no way to get them shipped,” says Todd Miller, president of the Piqua, Ohio, company.

Miller is also waiting for shipments of raw materials from overseas, including sheeting commonly known as tar paper that is placed under roofing tiles. His problem is he’s competing with every other importer for space on container ships.

“We can get it produced, but it will take four to six weeks before they can load it on a ship,” he says.