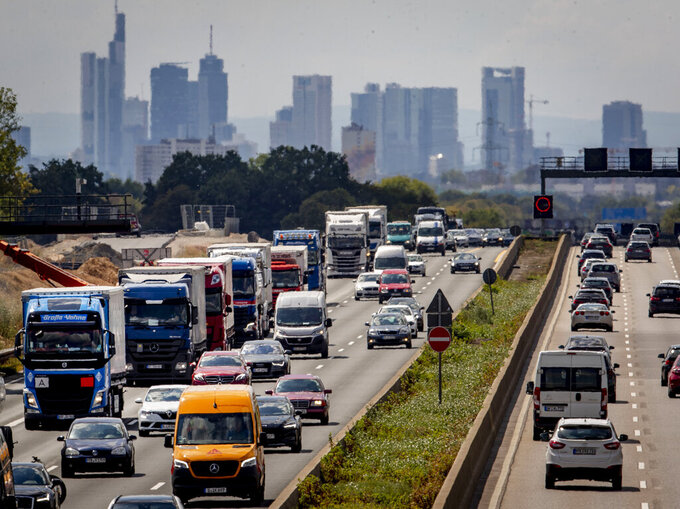 Cars and trucks drive on the main highway around Frankfurt, Germany, Tuesday, Aug. 4, 2020. In background the buildings of the banking district. (AP Photo/Michael Probst)

BERLIN (AP) — German factory orders surged in June, according to figures released Thursday, giving hope that Europe's largest economy is on track for a recovery from declines suffered from the coronavirus pandemic lockdown earlier in the year.

Industrial orders rose by 27.9% in June over the previous month, according to figures from the Economy Ministry adjusted for seasonal and calendar factors.

That was more than double the increase economists had expected, and followed an already strong 10.4% increase in May.

ING bank chief economist Carsten Brzeski noted that after the lifting of lockdown measures in April, it was mainly private consumption in Germany that rose strongly, while industrial activity had been lagging behind.

“Today's numbers suggest that the industry could catch up with the momentum in the rest of the economy,” he said in a research note.

Germany's economy took a massive hit during the pandemic shutdowns, shrinking by 10.1% during the April-June period from the previous quarter as exports and business investment collapsed.

Even with the surge in June, industrial orders are still down by more than 11% on the year.