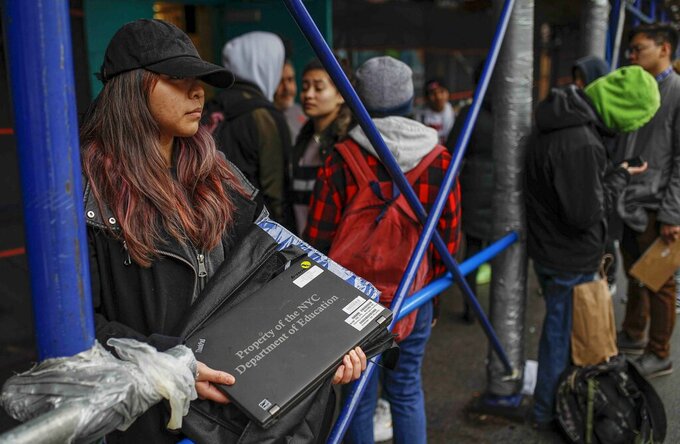 FILE - In this March 19, 2020, file photo, Anna Louisa, 18, holds her school-issued laptop at the Lower East Side Preparatory School in New York. About 8% of New York's public school students did not have a laptop or other device to use for remote learning in the first months of the school year, and about 6% lacked adequate internet access, survey results released Wednesday, May 5, 2021, show. (AP Photo/John Minchillo, File)

BUFFALO, N.Y. (AP) — About 8% of New York’s public school students did not have a laptop or other device to use for remote learning in the first months of the school year, and about 6% lacked adequate internet access, survey results released Wednesday show.

The report also revealed the level of need in city districts that, as the pandemic closed schools, rushed to obtain wireless hot spots and strike deals with cable companies to provide internet to students without access at home.

About 125,000 New York City students, or about 14% of all students, were without devices and 13% lacked internet access after the nation's largest school district supplied internet to a third of its students, and devices to 55%.

In rural schools, 7% of students had insufficient internet access.

Cost was the biggest barrier to connectivity in cities, while availability most hampered rural students, according to the survey.

Statewide, about 69% of students had access to school-issued laptops or tablets.

Education Department spokesperson Emily DeSantis said inequitable access to technology and internet service was a priority before the pandemic.

“The closure of New York schools and subsequent shift to remote learning only highlighted this urgent need,” she said in a statement.

A report to be issued following the last of three digital equity summits, scheduled for June, is expected to make recommendations for local, state and federal action, state education officials said. Previous sessions were held in February and March.

More than 2.6 million students were represented in the statewide survey. The results initially were announced by the New York Civil Liberties Union following a public records request. The Education Department made them available on its website.

“This information underscores just how vulnerable our public schools are after decades of under-funding and racial segregation,” Johanna Miller, director of the NYCLU’s Education Policy Center, said in a statement. “Education leaders at every level need to examine this issue with their communities and construct solutions that will heal, restore and compensate for the failure to reach so many kids during the pandemic.”

The survey indicated that more than 91,000 of the 215,000 students without devices attended schools that said they had ordered devices that had yet to be delivered.