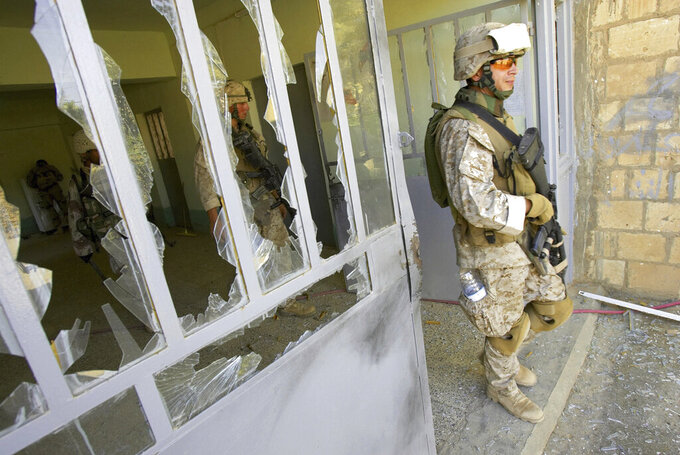 FILE—This file photo from Aug. 6, 2005, shows U.S. Marine Staff Sgt. Brian Hamilton of Columbus, Ohio, from Lima Company of the 3rd Battalion, 25th Regiment as he exits after searching a school, in Parwana, near Haditha, Iraq. Days before, a nearby roadside bomb killed 14 Marines, many from this platoon, and a civilian interpreter on August 3, 2005. Some survivors and families of those killed had planned a 15-year reunion this weekend, but it had to be canceled amid restrictions for the COVID-19 pandemic. (AP Photo/Jacob Silberberg, File)

CINCINNATI (AP) — Jason Dominguez remembers vividly his last conversation with David Kreuter, as they were doing an overnight security watch from a rooftop in western Iraq.

Marine Cpl. Dominguez and Sgt. Kreuter usually joked around, but this night 15 years ago was different. Kreuter proudly showed him a photo of his 7-week-old son. “Wow, you're a father!” Dominguez exclaimed.

“Yeah, I am,” replied Kreuter, 26, who then talked excitedly about getting to see and hold baby Christian for the first time. “His priorities in life had just shifted," recalled Dominguez, who, like the rest of the Lima (pronounced LEE'-muh) Company Marines, also looked forward to the end of their tour of duty in a couple more months.

The next day, Aug. 3, Kreuter was among 15 people killed by a roadside bomb near the town of Haditha. Eleven of them were Lima Company Marines.

The Columbus, Ohio-based Reserve unit was among the hardest-hit of the war in Iraq, losing 23 men after 180 deployed in early 2005. They held a reunion in 2015, and another was planned this month but had to be canceled amid coronavirus restrictions.

The first day of the reunion would have included a Marines-only workshop on coping with their painful memories and trauma all these years later, said Bryan Hillberg, a survivor who lives near the village of Waynesville in southwest Ohio.

“Some stuff is seared into your brain and some of it is just fuzzy,” said Hillberg, 39.

Seared in: Aug. 3. Hillberg's head and shoulders were out of his amphibious assault vehicle as the lance corporal served as gunner for the second vehicle in the convoy, just ahead of the one hit by the bomb.

“When it blew, it shook everything,” he said. “I remember looking back and it flipped it and split it in a way that with all the dust and everything, the shape looked normal. I looked at my buddy and said ‘Thank God, they missed.’"

He quickly realized he was wrong.

Dominguez was two vehicles back from the exploded one.

“You saw the orange ball of fire and you just knew,” Dominguez said.

It was the final blow of a deadly week in that area: Two Lima Company Marines also were killed while “clearing” houses of any possible insurgents, and six Marine snipers were lost when their outposts were overrun by insurgents.

Lima Marines who witnessed the bombing were invited by their commanders to return to their base and meet with counselors, Hillberg said. They declined, some saying the World War II Marines their company traces roots to wouldn't have left the battle on Iwo Jima.

The following few days are the fuzzy ones.

One day when they were clearing houses, Hillberg suddenly couldn't go into the next one. He told his team leader, who directed him to take cover nearby. Soon, tears were rolling down from behind his sunglasses.

Although the reunion is canceled, Kreuter's parents were recently able to host an annual golf tournament that benefits a memorial scholarship fund. It was iffy for a while, especially before the state reversed an order closing golf courses.

Ken Kreuter said they've raised more than $125,000 through the tournament that grew out of an annual pancake breakfast in David's honor. They award $1,000 scholarships to Cincinnati-area students.

His wife, Pat Murray, helps keep up a network of the Marines' survivors, although Kreuter said they have lost touch with some. Some others also have memorials and benefits in their children's names, and a traveling tribute exhibit was created more than a decade ago.

“The saddest thing," Pat said a few days ago, "is no new memories have been created with David. That really hurts.”

Dominguez, a father of two children, has his rituals this time of year. On July 28, he visited the grave of Columbus-area native Cpl. Andre Williams, one of two Lima Marines killed that day in 2005 while clearing houses. As he always does, he left a coin for Williams.

On Aug. 3, he usually meets up with other survivors and family members, winding up at a Waffle House to trade stories and memories. Because of pandemic restrictions and concerns, he's not sure how many people will participate this year.

“You celebrate the time you had with them,” Dominguez said of the slain Marines. “You tell your kids about it. You think about the choices you have, choices to live a life that is worthy of their sacrifice."

This story has been corrected to show that the attack was near the town of Haditha, not Hiditha.