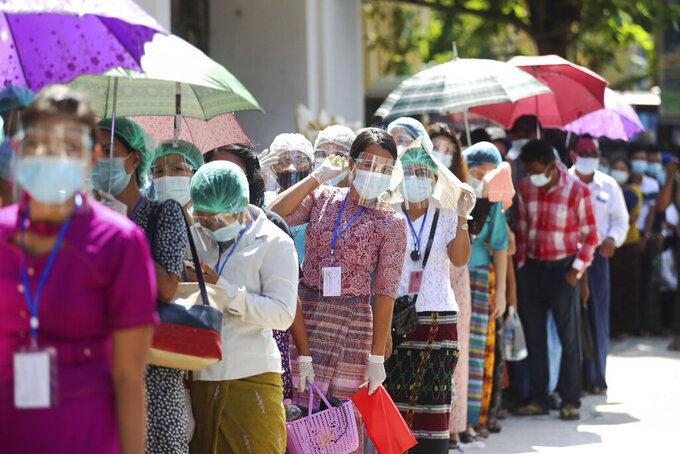 Voters wearing protective face masks to help curb the spread of the coronavirus line up to cast their ballots at a polling station near Shwedagon pagoda Sunday, Nov. 8, 2020, in Yangon, Myanmar. Voting was underway in Myanmar's elections on Sunday, with the party of Nobel Peace Prize laureate Aung San Suu Kyi heavily favored to retain power it had wrestled from the powerful military five years ago. (AP Photo/Thein Zaw)

Suu Kyi's National League for Democracy party won the last elections in 2015 in a landslide, ending more than five decades of military-dictated rule in the country.

With Myanmar under threat from a coronavirus surge, mask wearing was mandatory in the lines at polling stations, and many voters also donned plastic face shields and gloves. Body temperatures were taken and hand sanitizing gel was freely dispensed by officials, but social distancing rules were only fitfully observed.

Traditional campaigning ahead of the election was severely limited by social distancing and quarantines in some areas.

“The voter turnout here is more than we expected,” said Zaw Win Tun, a neighborhood administrator and official at Yangon's Pho Myae polling station. "I think people are excited to vote, as they would like to escape from the political struggles. They want real democracy.” He did not elaborate, but appeared to be referring to a power struggle between Suu Kyi's civilian government and the military.

The ability of Suu Kyi’s administration to run the country has been hamstrung by a clause in the 2008 army-drafted constitution giving the military 25% of the seats in Parliament, allowing it to block constitutional reforms.

At another polling station, 19-year-old Eaint Yadanar Oo said she was excited because it was her first time voting.

“I came here to vote to perform my civic duty,” she said. She explained that she was afraid of the coronavirus pandemic, but that she "came here with full protection because I want better educational and job opportunities.”

More than 90 parties competed for seats in the lower and upper houses of Parliament, while there were also elections at the state levels. There were more than 37 million people eligible to vote, including 5 million first-timers.

With the opposition in disarray, Suu Kyi, who is the nation's leader with the title of state counsellor, remains Myanmar’s most popular politician. But her government has fallen short of expectations, with economic growth doing little to alleviate widespread poverty and a failure to ease tensions among the country’s fractious ethnic groups.

Suu Kyi, 75, cast her ballot late last month in the capital, Naypyitaw, as citizens 60 years of age and over were encouraged to vote in advance, along with those who were forced by the coronavirus to stay away from their home constituencies.

Her party’s main challenger, as it was five years ago, was the military-backed Union Solidarity and Development Party, which has led the opposition in Parliament.

The Election Commission said it would begin to announce results Monday morning. Polling stations began tallying the ballots as soon as voting ended, but it may take up to a week to collect all the votes, some of which will come from remote jungle areas.

The election was widely seen as a referendum on Suu Kyi’s leadership.

“There is no major party really putting an alternative, a credible alternative, forward,” Yangon-based political analyst Richard Horsey said, explaining part of the reason Suu Kyi's side has a winning hand in Myanmar’s heartland, where its ethnic Burman majority lives.

Even more important for the ruling party’s prospects, he said, is “the personal support, even love, that many people have for Aung San Suu Kyi herself, almost irrespective of how the government administration performs, how the economy performs and so on."

One such fan was 32-year-old voter Mee Mee, a business owner. She said she was excited because in her travels around the country she could see changes and development initiated by Suu Kyi's government putting the country on the right track.

“I like Auntie Suu. She’s good,” said Mee Mee, referring to Suu Kyi by how she is popularly known. "I believe in her and what she’s doing."

Hundreds of NLD supporters gathered Sunday evening in from of the party's headquarters in Yangon to celebrate what they expect to be a victory. Myo Nyunt, a party executive and spokesperson, came out to urge them to celebrate at home, but instead the crowd grew larger, waving flags and singing songs.

Aung Sithu, 38, said he came with his 4-year-old daughter to cheer for Suu Kyi. “I am worried about the virus, but I have to come here and show my support," he said.

The affection for Suu Kyi does not extend to the borderlands, the states occupied by the myriad ethnic minorities who have been seeking greater political autonomy for decades.

Suu Kyi’s ambitious plans to reconcile with the minorities have foundered. Their grievances have frequently erupted into armed rebellion, posing major threats to national security.

The ethnic political parties in 2015 had cooperated with Suu Kyi’s party to ensure victory against candidates from the Union Solidarity and Development Party. But this year, the ethnic parties, disappointed with her failure to reach a deal to expand their political rights, supported only their own candidates.

The Union Election Commission caused major controversy when it canceled voting in some areas where parties critical of the government were certain to win seats. The commission said those areas were dangerous because of insurgencies, but critics said the agency was carrying out the NLD’s bidding. More than 1 million people are estimated to have been disenfranchised.

The plight of Myanmar's Muslim Rohingya ethnic minority — an issue of major concern outside the country — played no real role in the campaign. A brutal 2017 counterinsurgency campaign by Myanmar’s army drove about 740,000 Rohingya to flee across the border to Bangladesh, leading to a World Court investigation of possible genocide.

Long-standing prejudice against the Rohingya, whom many consider illegal immigrants from South Asia despite their families having been settled in Myanmar for generations, has deprived most of Myanmar citizenship and basic rights, including voting.