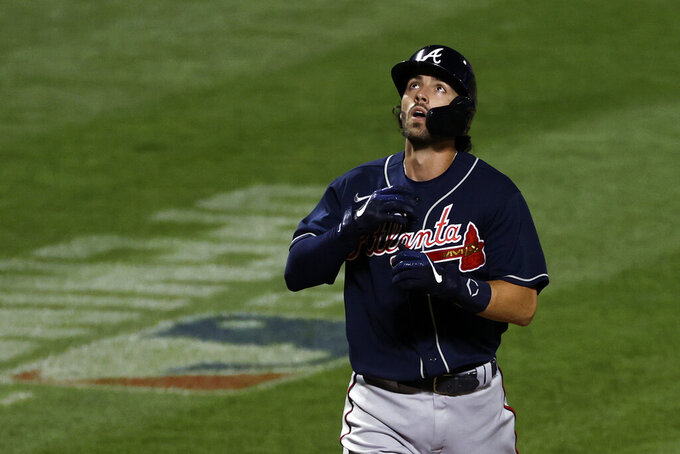 NEW YORK (AP) — Dansby Swanson tied his career high with five RBIs and the Atlanta Braves chased an erratic Rick Porcello during the third inning of his New York Mets debut in a 14-1 blowout Sunday night.

Atlanta had 17 hits, 11 for extra bases, and took two of three in the season-opening series after losing 1-0 on Friday and coming within a strike of defeat Saturday before rallying.

Swanson, Marcell Ozuna and Austin Riley all went deep against Corey Oswalt, who has allowed 18 home runs in 20 big league appearances. Riley’s drive went off the facade of the left-field upper deck and would have traveled 458 feet unimpeded, according to Statcast.

Ozzie Albies had three hits and three RBIs, including a two-run homer off Paul Sewald.

Swanson blooped an RBI single to center for the second run of the first inning, hit a two-run double that chased Porcello in a five-run third and had a two-run, opposite-field homer to right-center in the fourth for a 9-1 lead. The shortstop also had five RBIs on July 4 last year against Philadelphia, which had been the last time he homered.

Porcello lasted 15 batters, allowing seven runs — six earned — seven hits and three walks in two-plus innings. His fastball was around 92 mph but he was repeatedly up in the strike zone and over the center of the plate.

Winner of the 2016 AL Cy Young Award, Porcello joined the Mets with a $10 million, one-year contract after going 14-12 last year for Boston with a 5.52 ERA, highest among 61 qualified starters.

He was hurt by Jeff McNeil, who shifted from third base to the grass in short right field and allowed Albies’ leadoff grounder in the third to bounce out of his glove for an error.

Given an eight-run lead, Sean Newcomb was removed after 3 1/3 innings and failed to get the win. He struggled with command, starting seven of his first nine batters with balls, throwing 42 of 82 pitches for strikes, hitting two batters and throwing a wild pitch.

He was replaced by Jhouyls Chacín (1-0) after allowing a double to the No. 8 hitter, backup catcher Tomás Nido, for New York’s third hit. Released by Minnesota in mid-July, Chacín allowed one hit over 3 2/3 scoreless innings in his first Braves appearance since 2016.

Matt Adams, who opted out of a minor league deal with the Mets to sign with the Braves, put Atlanta ahead in the two-run first when he lined an RBI single through the shortstop hole vacated by the defensive shift.

New York 2B Robinson Canó was dropped to seventh in the batting order in a regular-season game for the first time since the last day of the 2009 season. He went 0 for 3, dropping to 1 for 9 with no RBIs in the series.

Mets first baseman Pete Alonso, the NL Rookie of the Year, debuted rakish bright blue spikes with a white pattern that resembled an ice sheet. His nickname is Polar Bear.

New York headed after the game to Boston for its first trip, on six charter buses rather than a private plane.

Reliever Justin Wilson will miss team dinners on the road, among the casualties of the protocols.

“That stuff’s fun, but we understand the benefits of still practicing social distancing and not losing guys,” he said.

“A lot of guys are bringing their Xbox, PlayStation,” he said. “Nimmo didn’t really play a whole lot of video games, but he’s strategic, calling out the plan. He’s just super smart.”

Braves manager Brian Snitker thinks some of the temporary rules for this year “might hold on. We may see that it’s not as drastic or not what we thought going into it.”

Even starting each extra inning with a runner on second base.

“If it decreases wear and tear on your bullpens and things like that, it may be something that we stay with,” he said. “The DH, I can definitely see that hanging around.”

Braves: LHP Will Smith, recovered from COVID-19, played catch at Truist Park and will pitch off a mound in the next few days. ... Snitker on Cs Tyler Flowers and Travis d’Arnaud, who went on the injured list Friday with symptoms of possible coronarvius. “They’re still not feeling great. They’re still kind of under the weather, so to speak. The tests are coming back negative so far. ... They haven’t turned the corner yet in just how they feel.”

Mets: Eduardo Núñez injured a leg when he fell while crossing first base in the eighth after beating out an infield hit.